A Bluetooth keyboard valued at $299 is available by redemption. 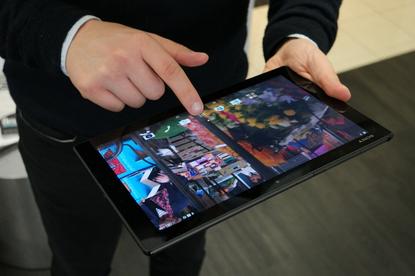 Sony has sneaked its flagship Z4 Tablet into Telstra stores with the slate going on sale today.

Telstra is offering the LTE variant of the Z4 Tablet with an allowance of 4GB of data for $62 per month on a 24 month contract. Customers will receive a complimentary Bluetooth keyboard valued at $299; however, this is only available via redemption and stock is limited.

Alternatively, the tablet can be purchased outright from the telco for $888.

Sony’s Z4 Tablet is manufactured in two variants — the second being a Wi-Fi only model — and it will be sold exclusively from Sony’s retail and online stores for $799.

Launching the tablet under the radar is an opportunistic move for Sony. Apple is holding a 9 September launch event, which is supposedly dedicated to the unveiling of a succeeding iPhone and, potentially, a revised iPad.

Anticipation for the Z4 Tablet has been high since its premier it at the Mobile World Congress in March. Sony claims the 6.1mm, 393 gram LTE tablet is the thinnest and lightest in the world, and yet it has a 1600p display, a Snapdragon octa-core processor and is water proof to 150 centimetres.

Read our review of the 'Sony Xperia Z4 Tablet: The tablet of choice for anyone on Android'