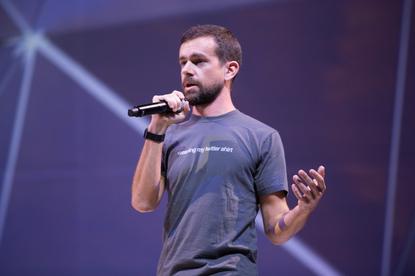 In a morning news television interview today, Twitter co-founder and CEO Jack Dorsey said the company doesn't censor users' tweets, and the company's not doing away with the 140-character message limit.

Dorsey gave a wide-ranging interview to Matt Lauer on The Today Show, marking the tenth anniversary of the micro-blogging site. Twitter has gained a huge mainstream following but still struggles with its bottom line, attracting new users and the loss of key employees.

Twitter "is the easiest way to see what's happening in the world right now live," said Dorsey, who took over the CEO spot, for a second time around, in October. "It really reflects what's happening right now and what people want to talk about."

In the interview, Dorsey touched on the recent threat the terror group ISIS made against him and Facebook CEO Mark Zuckerberg. "I found it alarming," he said. "We took it very seriously."

When Lauer asked a question about whether Twitter censors users, Dorsey emphatically denied it, saying, "Absolutely not.

"Twitter has always been about controls," said Dorsey. "People can follow who they want. It's our job to make sure they see the most important things and the things that matter to them... You can follow who you want and if there's something you don't want to see, you don't have to follow it."

And while Dorsey did say tweets that promote violence are against the company's terms of service, he also said he's never personally blocked anyone from his own feed.

"I get some nastiness every now and then," said Dorsey. "I want to see what people are saying. I really want to hear from them."

Brian Blau, an analyst with Gartner Inc., said he hasn't seen censorship being a big issue on Twitter, except for the social network trying to shut down terror groups, like ISIS, from using the site to recruit followers and back violence.

"I have seen Twitter filter tweets in certain circumstances, such as when required by law or even on their on to combat issues like terror groups or cyberbullies," said Blau. "This is a real issue for Twitter and one that isn't easily solved given the diverse privacy and free speech laws."

However, Dan Olds, an analyst with The Gabriel Consulting Group, said he thinks censorship could be a growing issue that Twitter will have to deal with.

"While there's been the external message from Twitter [that they don't censor], there are many who say that censorship is alive and well at Twitter, if not increasing," he added. "If you Google the terms "Twitter" and "censorship," you come up with plenty of incidences where people are alleging that Twitter has either banned accounts or applied "shadow bans" that keep particular tweets from showing up."

In this morning's interview, Dorsey also briefly took on reports that Twitter is looking to dramatically raise its 140-character limit on tweets.

"I'm glad to see them sticking with their 140-character tweets," he said. "That's Twitter. Remove that and Twitter starts to get watered down and blends in with everyone else."

Further, Kagan said, "I think 140 characters is plenty. You can add links and you can add a second tweet if you need more room. Twitter is all about brevity."

Dorsey also talked about the trolls who use Twitter to bash people. "It's disappointing but it's a reflective of the world," said Dorsey. "We see as much optimism and positivity as negativity. And the most important thing is that we empower dialogue, we empower conversations so people can work out their issues."

It's that ability to create immediate dialogues that has gained Twitter its worldwide popularity, with the site taking on significant roles in elections, political and social strife and natural disasters.

"Bottom line: After 10 years, I think Twitter is still in the game and users still love it," said Kagan. "It doesn't mean that Twitter hasn't got problems, however. Every company needs to continue to innovate."

"Their success in their 10 years is a testament to their early focus on mobile and establishing themselves as the go-to community for real-time news and events," he said. "That is a fairly powerful position to be in."

As for Dorsey, when Lauer asked him if Twitter would be around to celebrate its fifteenth anniversary, he didn't hesitate with his answer.