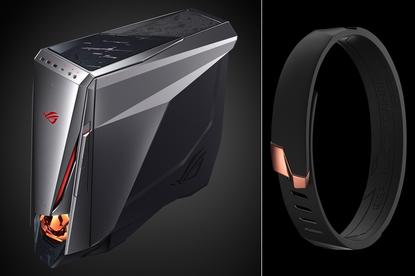 Asus didn’t want to be left out of the wearable tech craze with its latest Republic of Gamers desktop.

The ROG GT51CA has all the trimmings you’d expect from a high-end gaming rig, including up to a 6th-generation (Skylake) Intel Core i7-6700K processor, support for an Nvidia GeForce GTX Titan X graphics card, dual 512GB M.2 PCIe RAID 0 solid state drives, up to 64GB of DDR4 memory overclocked to 2,800MHz, and a multi-zone thermal solution with liquid cooling. The case is pretty slick as well, looking vaguely like an evil robot, with a special lighting mode that activates while the system is overclocked.

But what really makes the ROG GT51CA stand out—for better or worse—is the included ROG Band, which you’re supposed to wear on your wrist. Waving the band in front of the desktop unlocks the Shadow Drive, a hidden partition where you can stash confidential data. The band can activate the system’s overclocking as well.

Does the ROG Band serve any purpose while you’re away from your desk? In theory, the NFC chip inside could be used for phone unlocking or home automation. But out of the box, it’s just another way to interact with the PC, with no fitness tracking, notifications, or any other features you’d expect from a wrist-worn wearable in 2016.

Odder still, the NFC sensor the ROG GT51CA needs to communicate with the ROG Band is optional. The product information Asus provided for the ROG GT51CA doesn't say whether the ROG Band, too, is optional. Given that we don't have pricing or retail availability for the system or any accessories, you’ll have some time to think over your level of commitment to wearable gaming tech.

Why this matters: In all honesty, remembering to strap on a wristband is probably going to be less convenient than remembering a password, and push-button overclocking would be a far better solution than NFC-based hand-waving. Still, the underlying idea of a gamer-centric wearable has some potential. Maybe next time Asus can hook up with Razer or another wearable device maker on something that’s a bit more versatile.