The $7 download includes all the features of Minecraft's Pocket Edition. 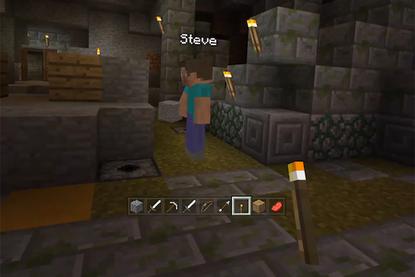 Minecraft: Gear VR Edition went on sale Wednesday in the Oculus Store, selling at $7 to download. The game includes all the features of Pocket Edition, including a “creative” mode that lets you build out a world, “survival” mode for fighting, and a multiplayer option. (Check out this video of the game in action.)

While available in the Oculus store, the game is meant to be played on the $100 Samsung Gear VR headset, which in turn requires the use of a Galaxy S7, Galaxy S7 Edge, Galaxy Note5, Galaxy S6 edge+, Galaxy S6, or Galaxy S6 Edge.

“Experiencing (Minecraft) in virtual reality changes it from an abstract activity to a visceral one,” Oculus’s John Carmack said in a blog post announcing the game. “It goes from a sense of playing the game to one of being inside your world, and spinning around to find a creeper sneaking up on you leaves a powerful impression.”

Carmack's blog post also notes that a gamepad is needed to play this edition of Minecraft. He recommended the $60 SteelSeries Stratus XL Bluetooth controller, available from Amazon.

Why it matters: It’s difficult to say whether Minecraft needs virtual reality gamers, or virtual reality needs Minecraft—with its more than 100 million registered users—to help its continued growth as a gaming platform. Assuming the game plays as smoothly as its Pocket Edition counterpart, which already seemed pretty immersive to users, both sides of the relationship stand to gain.