Stickers are a fun way to spruce up your photos, but they have a surprisingly practical application, too. 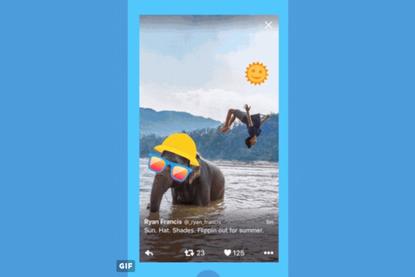 Now you can add a ton of fun stickers to your Twitter photos, and there’s a hidden benefit.

On Monday, Twitter started rolling out searchable stickers for iOS and Android. You can add these oversized emoji by tapping on the smiley face right after uploading a photo. Stickers are organized by various categories, including accessories (think, sunglasses and devil horns), food, animals, and activities.

At first glance, stickers may seem like an obvious move by Twitter to replicate Snapchat’s silly filters. But Twitter has actually given stickers a useful application. You can tap on any sticker to see other photos in the Twittersphere that have also used that same sticker. That way, stickers become searchable, similar to hashtags, and serve to connect Tweets and photos together.

“After you Tweet a photo with stickers on it, your photo becomes searchable in a new, visual spin on the hashtag,” wrote Twitter Senior Product Manager Sasank Reddy on the company blog. “Tapping on a sticker in a Tweet takes you to a new timeline, where you can see how people all over the world use that sticker in different ways.”

Why this matters: In the last year, Twitter has been releasing new features nonstop to try to lure more users. The addition of stickers is certainly one of the most visual features to come to the platform in recent memory, but it’s interesting to see that they actually have a purpose.

Although these Twitter stickers may seem like a direct response to Snapchat’s popularity, the feature actually reminds us of Instagram’s emoji hashtags from last year.