Microsoft appears to be building a business app marketplace 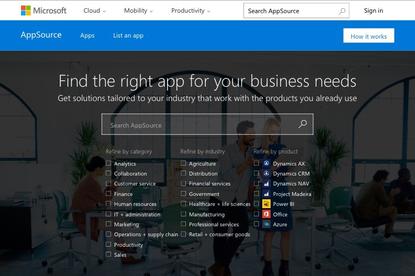 Microsoft appears to be building a business app store. The company put online a test version of a service called AppSource that’s designed to help businesses find software that augments the Microsoft products they already use, such as Power BI and Dynamics AX.

The AppSource site was available Tuesday night at appsource.microsoft.com), but is down now. A description on its homepage said that users would be able to use the site to find software-as-a-service offerings from Microsoft and selected partners that they could try for free before purchasing them.

All of this appears to have come to light after someone developing the site at Microsoft accidentally made a test version of it available on the public Internet, where it was discovered by a prolific Microsoft leaker who goes by Walking Cat on Twitter.

The service stayed up for about an hour after Walking Cat first posted about it on Twitter, which was enough time to find out the basics of what it means.

According to the documentation that Microsoft published, developers who want to list their app in AppSource will have to offer a free trial and allow their application to integrate with Azure Active Directory, Microsoft’s cloud-based identity and authentication service.

Microsoft will then review the app prior to publishing it in AppSource. Unsurprisingly, it seems like Microsoft will be launching AppSource with a handful of partners, including Dynaway, XAPT, AvePoint and SBS Group. Each integrated app is supposed to work with a Microsoft product, such as Dynamics CRM, Dynamics AX, Azure or Power BI.

The placeholder integrations indicated that the site wasn’t supposed to be live, but a dead giveaway was what happened when users clicked on the “How it Works” button. The site brought up a video of Rick Astley singing “Never Gonna Give You Up,” which isn’t what Microsoft is likely to say in that place when the service actually launches.

It’s unclear when that’s going to actually happen, since Microsoft won’t say anything about the launch. It seems likely that AppSource will be released or at least unveiled at the company’s Worldwide Partner Conference in Toronto in two weeks.

This isn't the first Microsoft initiative aimed at helping businesses buy applications online. The company is also pushing a Windows Store for Business in Windows 10, which should help business users to buy native apps for Windows 10.