Samsung's first foldable might be further away than you think 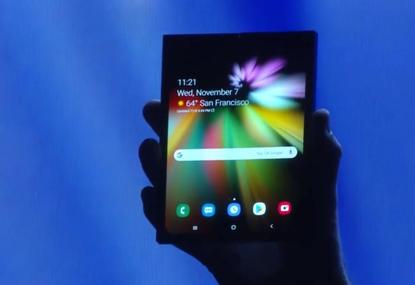 First teased at the company’s Developer Conference back in September, expectations are high for Samsung to show off their first foldable smartphone at this week’s Unpacked press conference.

However, ahead of what might well be a major moment in tech history, I’m here to rain on your parade. With no specific insider knowledge to speak of, I want to make the case that Samsung’s Galaxy F and the era of the foldable smartphone are probably further away than you might think.

The biggest reason I think this: there have been no leaks.

I mean sure, there’s been no shortage of reports on patents, speculation about the design and countless concept renders that envision what Samsung’s foldable smartphone might look like. But when it comes to unauthorized sneak peeks of the unannounced handset, things are radio silent. And that’s telling.

What’s more likely? That these companies and the people who in charge of keeping these new products secret have finally outsmarted leakers like Evan Blass or that foldable smartphones are so far off being market ready that there’s nothing to leak yet? I’d put my money on the latter.

These days, even the biggest and most well-equipped of technology companies in the world struggle to keep info about their future products under wraps. Why should that change now? Mass-market consumer tech like the Galaxy S10 and the iPhone go through so many sets of hands over the course of their production that keeping a secret in the era of social media and Reddit is almost impossible.

Despite the efforts of everyone involved, pictures always get out. Test units are spotted in the wild, spec sheets are submitted to regulatory bodies and promotional images are accidentally uploaded to websites.

Foldable smartphones have the potential to change the way we interact with and conceive of smartphones. However, one thing they probably won't change is the capability of these companies when it comes to keeping information to themselves.

So why haven’t we seen leaked photos and details of Samsung’s first foldable yet? The simplest and most-obvious answer is that it’s not ready for market. Don’t get me wrong, we’re almost-certainly going to get a look at what the first wave of foldable smartphones looks like at this year’s Unpacked and Mobile World Congress.

But if you think those devices are going to land in a JB Hi-Fi a month from now, you’re going to be disappointed. The things we’re going to see from Huawei, Motorola and Xiaomi at this year’s MWC are probably going to be little more than proof-of-concept products. The reason why isn’t hard to grasp.

Samsung and the rest aren’t cranking out foldables already because, when it comes to commercial success, they’re still an unproven quantity. Everyone involved undoubtedly hope that foldables take off and capture the attention (and money) of consumers en-mass. But nobody knows for sure.

And at this stage, it’s hard to say whether foldable phones are the next iPhone or the next Apple Watch. And if you’re Samsung, there’s always the chance that the excitement around your foldable cannibalizes attention and sales from the launch of the Galaxy S10 and S10+. There’s already a pretty-recent precedent for this dynamic in the form of the iPhone X.

I do think we’ll probably see the first mainstream foldables launch towards the tail-end of 2019. However, if you’re expecting to pick up a Samsung Galaxy Fold before tax-time, you might want to re-assess that assumption.

The future might around the corner but it’s far from imminent - and there is a distinction to be made.