Microsoft's Surface Hub 2S could be the centerpiece of your next conference room. 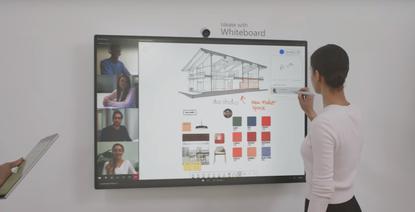 Last year, Microsoft announced the successor to its Surface Hub—the Surface Hub 2S, a 50-inch whiteboarding PC that could be mounted on a wall or even rolled from room to room. On Wednesday, the company formally launched that product, and announced a larger, 85-inch model due later this year, as well as a separate Surface Hub 2 Display monitor.

Don’t expect the Surface Hub 2S to grace your living room or home office, however, as Microsoft has priced 50-inch 2S display at $9,000. Microsoft sees the 2S as a collaborative workspace, running Teams, Office 365, its Whiteboard app, and other Microsoft software. Microsoft launched the Surface Hub 2S on Wednesday in conjunction with Steelcase, which is manufacturing the rolling easel that makes the Surface Hub 2S semi-portable—there’s even an optional battery attachment. The easel (along with the 2S) will begin shipping in June.

Little appears to have changed since the 2S was originally announced: There’s still a 4K camera to complement the sweeping sheet of glass upon which remote users can either appear in little windows, or in a full-sized approximation of their real-life selves. The screen itself is multi-touch enabled, and ships with a large, thick stylus that can be magnetically attached to the side of the screen.

What’s interesting about the Surface Hub 2’s design is that it features a modular compute hub that can be removed, and, conceivably, upgraded. The Surface Hub 2S will eventually be replaced by the Surface Hub 2X “experience,” a compute hub with upgraded hardware that’s expected to show off an upgrade to Windows. Microsoft said last year that it expects the 2X to ship in 2020.

What this means to you: Microsoft smartly realizes that there is no one-size-fits-all approach to collaboration, so it’s providing separate sizing options and even a CPU-less display option for those companies that simply want to upgrade an existing solution. We still need to see what the future holds for the Surface Hub 2, though Microsoft is aggressively leveraging its other collaboration features to push the Surface Hub 2 into the workplace.