ORDER has the Pacific Showdown in their sights. 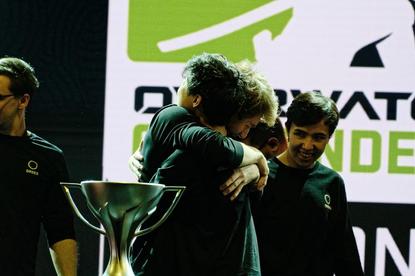 It’s the first outing for Overwatch at an IEM event, bringing the best of Australia’s local scene to the Qudos Bank Arena to battle it out for a share in Contenders' US$100,000 prize pool.

[Related: Everything you need to know about esports]

Despite being back-to-back-to-back regional champions, Sydney Drop Bears suffered from a last minute lineup change, losing Teetawat to an Academy team just days out from the tournament. To make up the difference, the Drop Bears roped in former-teammate ChroNoDotA.

Regardless, they narrowly lost the first map, Oasis, despite almost capturing the point in the third round. Here, ORDER managed to take over - forcing overtime. A late Sound Barrier from support player Unter propelled the team to an early victory over the Drop Bears.

“We knew they were confident going in,” Drop Bears player Shoyo explained to PCWorld in a post-game interview.

“They just played better. We just didn’t level up fast enough throughout the series.”

ORDER, on the other hand, weren’t letting anything get in their way. Not even team changes of their own back in February.

As official rules state that teams can’t make substitutions during the playoffs, their roster was cut from 7 players to 6. DPS player Signed returned to the team after a break from competitive play, with Jordation switching to support to compensate for the loss of support player Merit.

The changes seemed to be for the best - the team blitzed through the next two maps, King’s Row and Horizon Lunar Colony, to be ahead 3-0. Match point.

However, when it came to the Watchpoint: Gibraltar, they weren’t able to properly counter the Drop Bears’ Ashe/Widowmaker combination. This cost them time and, ultimately, the fourth map of the series - bringing the score to 3-1.

It all hinged on ORDER’s final map pick: Nepal.

The first round was very close. It was almost a repeat of Oasis. Again, the Drop Bears managed to reach 99% before control of the point was snatched away by ORDER. A clutch combination of Quatz’s Earthshatter and Adam’s Self-Destruct then managed to take down four of the Drop Bears at once - securing them the round.

“As soon as he did that and the round was over, I yelled some bad words into his ear and called him a legend,” coach Rqt told PCWorld after the match.

The momentum didn’t stop there, continuing into the second round - with a team kill locking in the series for ORDER.

The result was nothing if not cathartic for the Melbourne team, who previously came up short against the Drop Bears in the 2018 Contenders season 3 finals.

“As soon as we won, tears just started coming out of my eyes. In the previous seasons we wouldn’t have even had the chance to go into the finals to roast the Drop Bears. All that matters is that we beat them 4-1.”

In addition to their share of the prize pool, ORDER is now set to represent Australia in the Contenders Pacific Showdown in Shanghai, China on 24th-26th May. Here, they'll face off against Contenders Pacific champions Talon Esports and the top two teams from China and South Korea.

You can experience the excitement of the Australian Contenders grand final for yourself via the OverwatchContenders Twitch channel.