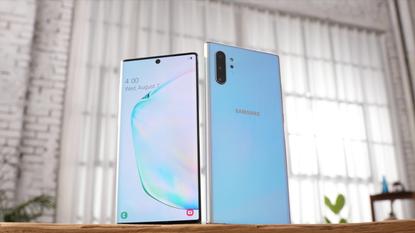 It’s that time of year again. Samsung’s new Note smartphone is here - but does it live up to the hype? We run the numbers to see how the Galaxy Note 10 and Galaxy Note 10 Plus compare against last year’s Galaxy Note 9.

Though the overall look of the Galaxy Note 10 and Galaxy Note 10+ isn’t that far off the Note 9, the design is where the biggest - or at least most noticeable - changes are going to be found.

The former could maybe considered a slight-downgrade on the Note 9’s 6.4-inch QHD+ screen but the latter is a clear upgrade that brings it in line with slick screens found in this year’s Samsung Galaxy S10 and Galaxy S10+.

Of course, while the Galaxy Note 10+ is the largest Note smartphone to date, that’s not to say there haven’t been subtractions. The headphone jack is gone. So is the Bixby button. You’ll now be able to summon Samsung’s smart assistant by holding down the power button for a few seconds.

As with any major flagship smartphone, a large chunk of the upgrades that the Note 10 offers over its predecessor are iterative in nature.

In Australia, the Samsung Galaxy Note 10, Galaxy Note 10+ and Galaxy Note 10+ 5G all rock an Exynos 9825 octa-core processor. This is a clear upgrade on the Exynos 9210 processor found in the Galaxy Note 9 that should bring it broadly in line with rivals, though we expect that in practice the performance won’t be able to match devices running on Snapdragon’s 855 SoC.

The battery is also getting a healthy bump upwards. At least, it is if you’re opting for the more expensive Galaxy Note 10+.

The PowerShare wireless charging found in the S10 and S10+ also returns.

The Samsung Galaxy Note 10+ and Galaxy Note 10+ 5G double down on this. They raise the bar to 20W for wireless charging and 45W for wired charging, assuming you’re connecting them to a charger capable of supporting such speeds. Both devices will only come with a 25W wired charger in the box.

All 2019 Galaxy Note 10 devices feature the same ultrasonic in-display fingerprint sensor found in the Galaxy S10 and Galaxy S10+ but Samsung have slightly amended the feature by moving it 33mm upwards. In the grand scheme of things, this is a pretty small change but it should go some ways towards making the sensor more ergonomic and comfortable to use.

Partially owing to the more advanced camera array on the back, the Galaxy Note 10 and Note 10+ are also promising to bring a few new perks and features to the table.

For one, the smartphone will support not just Live Focus bokeh videos but also improved Super Steady stabilisation and zooming audio mic capabilities akin to that found in recent LG and HTC hardware. There’s also going to be a native video editor this time around, accompanied by version of Adobe Rush optimised for the device.

There are also some new tricks coming to the Note 10’s signature S-Pen. Exporting notes to Word or PDF is said to be a bit easier and there’s a new pinch zoom function. However, the biggest addition here looks to be Air Actions.

Building on the capabilities of the new S-Pen introduced with the Note 9, Samsung say that developers will now be able to use a new S-Pen SDK to create custom controls and shortcuts to suit more specific or complex use cases.