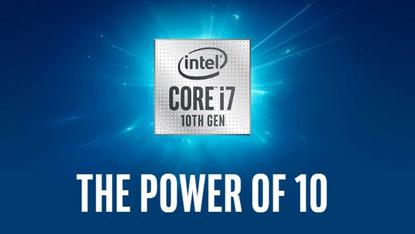 Intel's latest mobile chipsets go all the way up to Core i9 and promise to deliver desktop calibre performance no matter where you need it.

Announced this week, Intel's pitch for their new Comet Lake H-Series processors is heavy on numbers. The chipmaker say that over 60% of SKUs in the range offer clock speeds of greater than 5Ghz and that you'll be able to find the new hardware beating inside over 30 new 'thin and light' OEM designs released later this year.

There are six SKUs in total here: two i5s, three i7s and a single unlocked i9 option those who want that extra performance.

Compared to a three year old system, Intel say the new chips deliver an average 44% performance bump in productivity situations. Meanwhile, gamers get 54% more frames-per-second and content creators should be able to render 4K video at double the speed.

Obviously, these are numbers that Intel have neatly prepared and placed in the most complementary light but they do give you some idea of what to expect if you are looking to upgrade something circa-2017. Until the reviews hit, at least.