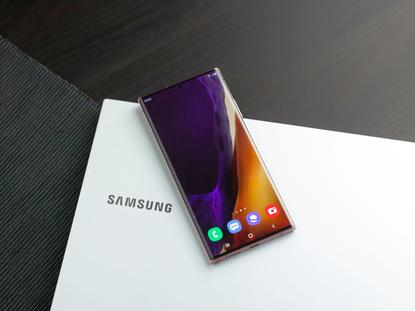 Last year’s Galaxy Note 10 was slightly unique in that it was pitched as a take on Samsung’s flagship phablet that was a little less power user and a little more accessible. The new Galaxy Note 20 puts a shiny new coat of paint on that same premise but how does it compare to the original ‘affordable’ Galaxy Note.

In Australia, both the Samsung Galaxy Note 20 and Galaxy Note 20 Ultra run on Samsung’s Exynos 990 chipset. As per usual, we’re getting Samsung’s own components here instead of the Snapdragon chipset you’ll find in the version of the device available in overseas markets.

Since last year’s Galaxy Note 10 relies on an older processor, it’s probably safe to assume that the Note 20 has the edge here.

Design-wise, the Galaxy Note 20 looks a little more colorful but more or less conventional. Samsung seems to have moved away from the translucent pearl palette introduced in 2019 and towards more traditional Bronze, Green and Grey colors. The back of the device also boasts an S20-style camera bump.

As for the screens, the Galaxy Note 20 features a 6.7-inch Dynamic AMOLED display with flat edges and a center-oriented holepunch notch. This isn’t too different but a definite upgrade on the 6.3-inch Galaxy Note 10 when it comes to resolution and size, though the Note 20 does see Samsung step away from the curved displays that have been a staple of their flagships for several years now.

When it comes to flagship features, the Galaxy Note 20 and Galaxy Note 10 have more in common than not. Both feature IP68 water resistance, in-display fingerprint sensor, Qi wireless charging, an S-Pen stylus, 25W fast-charging via USB Type-C.

Another small but important difference here is that the new Galaxy Note 20 incorporates a slightly upgraded S-Pen with lower latency relative to its predecessors.

Building on that, the Galaxy Note 20 features a 12-megapixel main lens, a 64-megapixel telephoto lens and 12-megapixel ultra wide lens.

As this spec-sheet might suggest, the Galaxy Note 20 is packing a hell of a lot more zoom potential than its predecessor. Samsung says that the rear camera on the device can offer up to 30x ‘Space’ digital zoom. This far exceeds the capabilities of the Galaxy Note 10.

From a distance and without having had the chance to mess with the device for ourselves just yet, it’s clear that while the camera is the X-factor here it’s not the only meaningful difference between the Galaxy Note 10 and Note 20. The shift back to a flat-screen is interesting, the larger battery inspires confidence and the new color options look slick.