Both free and paid Zoom users will be able to make or join Zoom calls on their Google displays before the year is out. 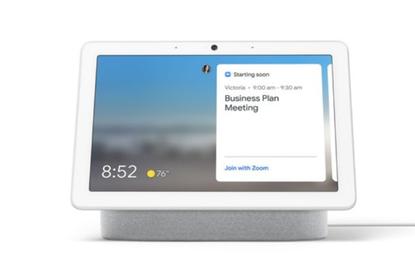 Google just announced that Zoom will arrive on the Google Nest Hub, the Nest Hub Max, and other Google Assistant-enabled smart displays by the “end of the year.”

As with the recent Google Meet integration, users will be able to join Zoom calls in their calendars by saying “Hey Google, join my next meeting,” or you’ll be able to tap “Join with Zoom” on an Assistant reminder card.

Both free and paid Zoom users will be able to make or join Zoom calls on their Google displays, Google added.

It’s not clear how many participants will be supported for Zoom calls on Google displays. For Google Meet calls, you can chat with up to 100 people on the Google Nest Hub or Nest Hub Max, while Google Duo (which used to only support one-on-one calls on a Google display) can handle groups of up to 32 people.

Meanwhile, Facebook’s Portal smart displays are capable of group video calls, but only for up to eight people via Facebook Messenger or four people for WhatsApp.