Watch Nvidia's GeForce Special Event with us on September 1!

Get your bingo cards ready. 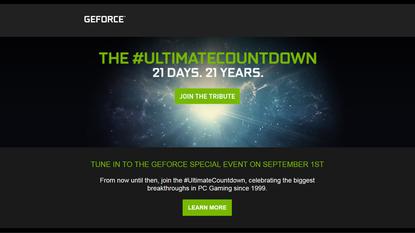 Outside of what Nvidia shared about its Ampere architecture during the company’s May GTC announcement and a tease of a new 12-pin power connector, little has been confirmed about what to expect for its upcoming GeForce RTX 30-series graphics cards. But that might change very soon: Announced earlier this month, Nvidia’s GeForce Special Event kicks off in one day on September 1 at 9 a.m. PT (12 p.m. ET), with the promise that gamers will see what comes next. And we’ll be watching and commenting live as it happens.

As we’ve done in the past, The Full Nerd crew will cover the event live on YouTube, with full reactions to CEO Jensen Huang’s reveals (and his signature leather jacket) in real time. Join us at 8:45 a.m. PT (11:45 a.m. ET) for pre-show thoughts, then stick around for the presentation and our after-show wrap up:

(Note: We will talk during the stream. For the unfiltered show, catch it on the Nvidia website.)

Speculation about a successor to the RTX 20-series series has run rampant for months now, but to date, Nvidia has yet to concretely lay out its plans. The company has only hinted at them through a video released last week that confirmed a new 12-pin power connector and a different approach to cooling. Most rumors and supposed leaks have swirled around the idea of an RTX 30-series based on the new Ampere architecture, with the possibility of an RTX 3090 as the flagship consumer GPU leading the stack—a massive card purported to cost $1,400 and be 35 percent faster than the 2080 Ti.

Other scuttlebutt suggests that the initial lineup will lack an update to 2080 Ti, with a $800 RTX 3080, $600 RTX 3070, and $400 RTX 3060 filling out the set. That pricing would be a hefty jump over the RTX 20-series card launch pricing, but like with all other conjecture, how things pan out remains to be seen. In the meantime, check out our RTX retrospective to see what gamers actually got from the last two years of ray tracing and DLSS.