How much does the new Apple Watch cost in Australia? 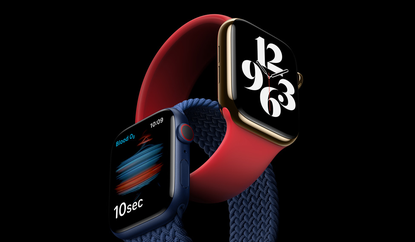 Apple have given the most popular smartwatch in the world its yearly upgrade.

The newly-announced Apple Watch Series 6 promises an improved processor (said to be 20% faster than the one in the Series 5), a brighter display, an always-on altimeter, faster fast-charging, sleep tracking and a blood-oxygen oximeter.

The short version here is that where the Series 5 focused on and refined the display side of the equation, the Series 6 looks to overhaul the device's health-tracking capabilities and put it in line with rivals like Fitbit and Garmin. It's less flashy approach but, arguably, a more significant one. It expands the possibility space of what the Apple Watch can do rather than just make it look better in action.

In Australia, the stock-standard, strictly GPS-enabled Apple Watch Series 6 starts at a recommended retail price of AU$599. Naturally, the cellular variant is priced a little higher at AU$749.

Though that price does go up once you add in extras like watchbands and the like, savvy folks may notice that this is actually cheaper than the launch pricing for last year's Apple Watch Series 5. Last year's crop started at AU$649. Entry-level pricing for this year's flagship wearable lands at a little bit less than that.

Both versions of the new Apple Watch are available in the usual two sizes - 40mm and 44mm - and a myriad selection of colors and materials. However, some of these variants bump the asking-price for Apple's latest smartwatch upwards by a significant degree. For example, the titanium version of the 40mm model doubles the starting price to AU$1199.

At the moment, the cheapest place in Australia to nab the new Apple Watch is directly through Apple - who are selling both the GPS and Cellular variants for as little as AU$599.

In Australia, the Apple Watch Series 6 is officially on-sale and available through retail from the 18th September, 2020.

In addition to Apple's own retail and online storefronts, the new Apple Watch can also be nabbed through the following retailers:

Optus customers can also grab the new wearable on a post-paid plan here.