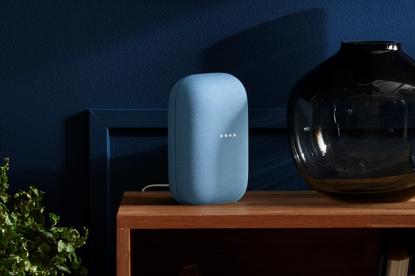 Meet the successor to the Google Home, with Google finally taking the wraps off its much-anticipated (and well-leaked) Nest Audio smart speaker, complete with a funky rectangular shell and upgraded audio quality.

Set to arrive October 5 for $99, the same price as the discontinued Google Home, the Google Nest AudioRemove non-product link had been rumored, leaked, and teased for months, with even Google circulating images of its yet-to-be-announced smart speaker back in July.

Unveiled during a virtual hardware event today, the 6.89 inch-tall Nest Audio is the same speaker we saw in those teaser images earlier this summer. Arriving in a rectangular, rounded shape, complete with a familiar fabric covering and equipped with four telltale Google Assistant LEDs, the Nest Audio is the first new Google smart speaker since last year’s Google Nest Mini, and it comes with new and improved drivers that promise better audio quality than the old Google Home.

Available in five colors (sage, sand, sky, chalk, and cargo) and powered by a quad-core A54 1.8GHz processor, the Nest Audio is equipped with a 19mm tweeter and a 75mm mid-woofer, and according to Google, the new speaker is 75 percent louder and offers 50 percent more bass than the Google Home. You can also pair two Nest Audio speakers together for stereo sound.

Similar to the Nest Mini, you can control playback and volume on the Nest Audio by tapping the top of the speaker, with a tap in the middle pausing and starting playback while taps on the top side corners adjust the volume.

In the back of the speaker sits a barrel-shaped charging port, along with a switch that mutes the microphone. Unfortunately (and similar to other Google smart speakers), there’s no 3.5mm audio jack for an external speaker (although arguably, the Nest Audio doesn’t need one), similar to other Google smart speakers. Amazon Echo speakers do come equipped with a 3.5mm audio jack.

As with other Google smart speakers, the Nest Audio comes with Google Assistant on board, which means you can control music playback with voice commands. You can also ask Google to tell you your schedule, check the weather, control smart home devices, and more.