Speeds, strength, and everything else you need to know. 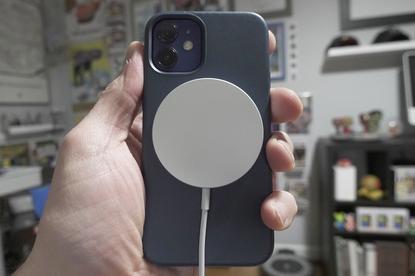 MagSafe might be an old name to Apple veterans, but it has a whole new purpose. Apple slipped a brand new charging and modular accessory system into the iPhone 12, resurrecting the charging connector Apple retired when it switched to USB-C charging on the MacBook.

But since Apple isn’t including a MagSafe connector or even a compatible power adapter in the iPhone 12 box, you probably have some questions about MagSafe. And depending on where you find the answers, they might not be all that accurate. So forget about what you’ve read: Here’s the truth about MagSafe.

Myth: Speeds are too slow with a third-party charger
Reality: As long as it’s 20W or higher, it doesn’t really matter which charger you use

Charging is tricky. Depending on the phone you buy, there are several different protocols out there—QuickCharge, Warp Charge, Adaptive Fast Charging, etc.—but the most common is USB Power Delivery, which is what Apple uses.

But if you buy a MagSafe charger for $39, you’ll need to bring your own power adapter, since Apple doesn’t provide one with the iPhone 12 or the MagSafe cable. That’s where things get a little tricky. MagSafe will charge the iPhone 12, 12 Pro, and 12 Pro Max at a maximum of 15W (only 12W for the iPhone 12 mini), but to get those speeds you’ll need to use Apple’s new 20W charger. Otherwise, you’re going to get 12W charging.

That sounds worse than it actually is. I tested MagSafe with several chargers and MagSafe worked fine with all but one, Choetech’s 100W charger. And while it’s true that none of them charged quite as fast as Apple’s 20W charger, they all filled up my iPhone at roughly the same pace.

You get the idea. Apple’s charger might hit higher speeds and would probably win in a zero-to-100 test using the MagSafe charger, but it’s not going to be a noticeable difference. With every charger I used, speeds slowed to under 10W once it reaches 50 percent charged when all of the chargers leveled off. So we’re talking minutes at most.

Myth: The MagSafe cases snap on easily using magnets
Reality: The cases are just as hard to remove as the iPhone 11 ones

I was somewhat mistaken when I ordered the clear MagSafe case with the ostentatious circular magnetic ring on the back. I was under the impression that the case served two purposes: bringing the MagSafe magnet to the back of the case for a stronger contact and connecting to the phone so the case could be easily removed.

Only one of those things is true. While the MagSafe adapter connects extremely well to the back of the MagSafe Clear case, which I tested, putting it on is just as difficult as the previous hard silicon case. Taking it off repeatedly leaves the same compression creases in the bottom corners where the case needs to be forcefully pushed away from the phone, and the buttons are just as rigid as with previous clear cases.

As it stands, your best bet is one of the silicone cases, though you’ll cover up the color you choose for the iPhone 12. If you want a clear case, look for a very thin one, like Totalee’s line of cases, which are available in frosted clear or fully transparent.

Myth: The magnets aren’t strong enough
Reality: While the wallet attachment isn’t ideal, the magnets are plenty strong for docks and mounts

While the MagSafe accessories Apple is selling are somewhat limited, the mechanism lends itself to all sorts of convenient uses. In my testing, the magnets are as strong as they need to be. When I attach the MagSafe charger to my refrigerator, for example, I need to pry it off, so the magnetic capabilities are there.

When using it with my iPhone 12, the charger is strong enough to stay attached to the back with a bit of jostling but will still detach when slightly pulled. The same goes for the wallet accessory, which won’t fall off unless pushed off (though it can be accidentally detached when sliding into a pocket).

Once more accessories come out, I think we’ll see the magnetic strength increase as warranted. For example, a car vent mount will need to be stronger to keep the iPhone attached when driving over bumps and curves, and based on what MagSafe is capable of, they should be.

There’s no denying that MagSafe is expensive and not all that worth it. Cases are $10 more than their iPhone 11 counterparts across the board, and the required charger costs $39 on its own without the required 20W USB-C power adapter. Add to that the $129 Duo Charger, $129 Leather Sleeve, and $59 Leather Wallet, and the cost of entry is definitely quite high.

But as with all things Apple, the early adopter tax will come down and the utility will go up. MagSafe does solve a persistent problem with wireless charging—making sure the proper contact has been made before walking away—and third-party car mounts, cables, and docks are already on the way. Granted it’s entirely possible MagSafe never takes off and quietly goes away with the iPhone 15, but I’m willing to bet it’s going to be a success.