It's all about the backhaul. Netgear in the U.S. has announced the first quad-band WiFi 6E router, in the form of the Orbi Quad-Band Mesh WiFi 6E System AXE11000 (RBKE960). Historically, high-performing, hot-rod routers have been tri-band, meaning they have an extra WiFi 5 band to cover the higher channels and offer more throughput for 160 MHz-capable devices. In contrast, every WiFi 6E router broadcasts on the 2.4 GHz, 5 GHz, and 6 GHz frequency bands, hence they are all necessarily tri-band. Unfortunately, this means that you lose that second, higher-throughput 5 GHz band in exchange for a band that very few devices currently use. This doesn't generally matter in any practical sense, but it's worth acknowledging.

Where this new Orbi mesh system diverges from the norm is in adding a fourth band, which will not be used directly by users per se, but will instead be a second 5 GHz band that functions as a dedicated wireless backhaul for the system. In networking parlance, a backhaul is an exclusive data link that functions as a back channel for communication between nodes in a mesh system, preserving throughput for the band used by your devices. Why 5 GHz over 6 GHz for the backhaul? In a briefing, Netgear said it was about range: while the 6 GHz band is currently free from congestion, enabling higher practical throughput, it simply can't be used to transmit as far as devices can on the 5 GHz band. 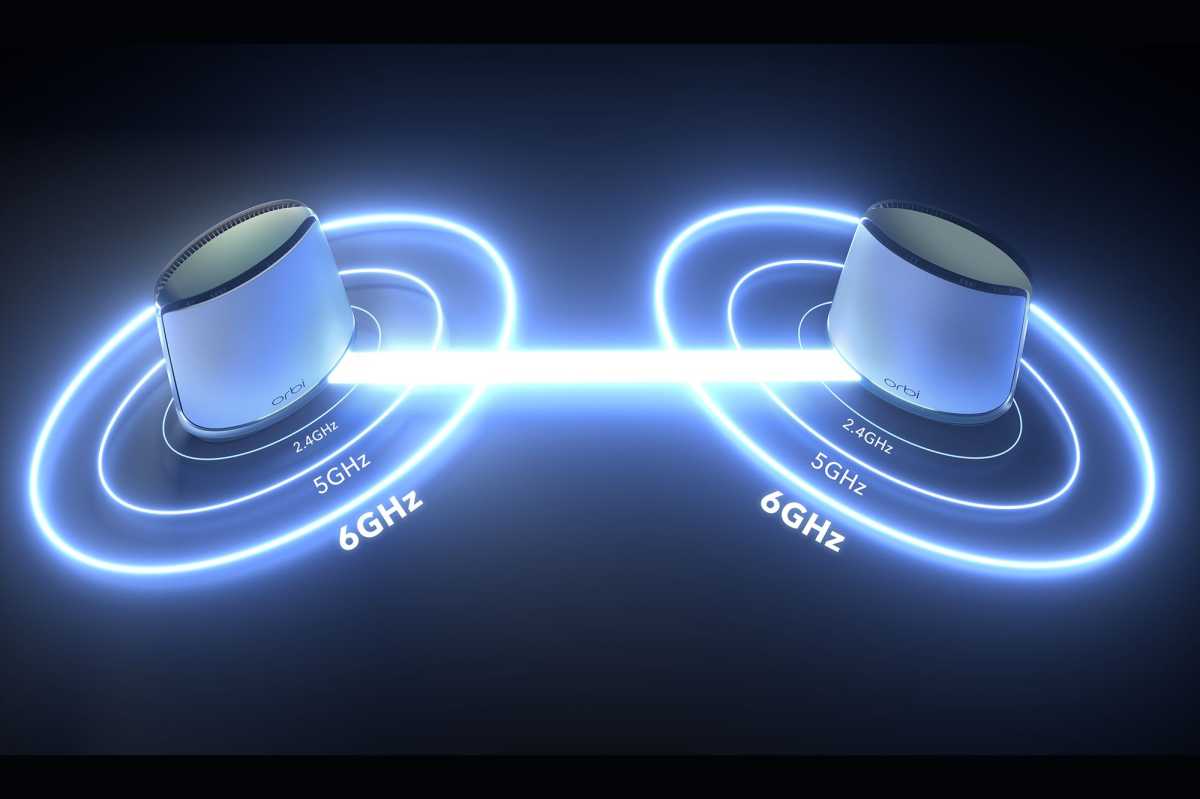 This new iteration of the Orbi mesh system is being pitched as a response to the increased upstream throughput needs of today's households. Since the beginning of the pandemic, remote work, digital classrooms, and even socialization via video call have all put much more emphasis on the importance of upload speeds than ever before. Netgear's Orbi also looks quite future-proofed, with a 10Gbps WAN port, a 2.5 Gbps LAN, and three gigabit ethernet ports on the primary gateway and an identical port layout—minus the 10 Gbps WAN port—on each satellite. That's a nice change relative to the previous WiFi 6 version, the RBK853, which has a 2.5 Gbps WAN and four gigabit LAN ports on the gateway router and just four gigabit ports on each satellite unit. That 2.5 Gbps LAN port on each satellite means you can run a very fast wired backhaul—however, doing so will not free up that fourth wireless band for use by your network devices, as Netgear reserves it in the event you'd like to add additional satellite nodes wirelessly to make up a hybrid network. 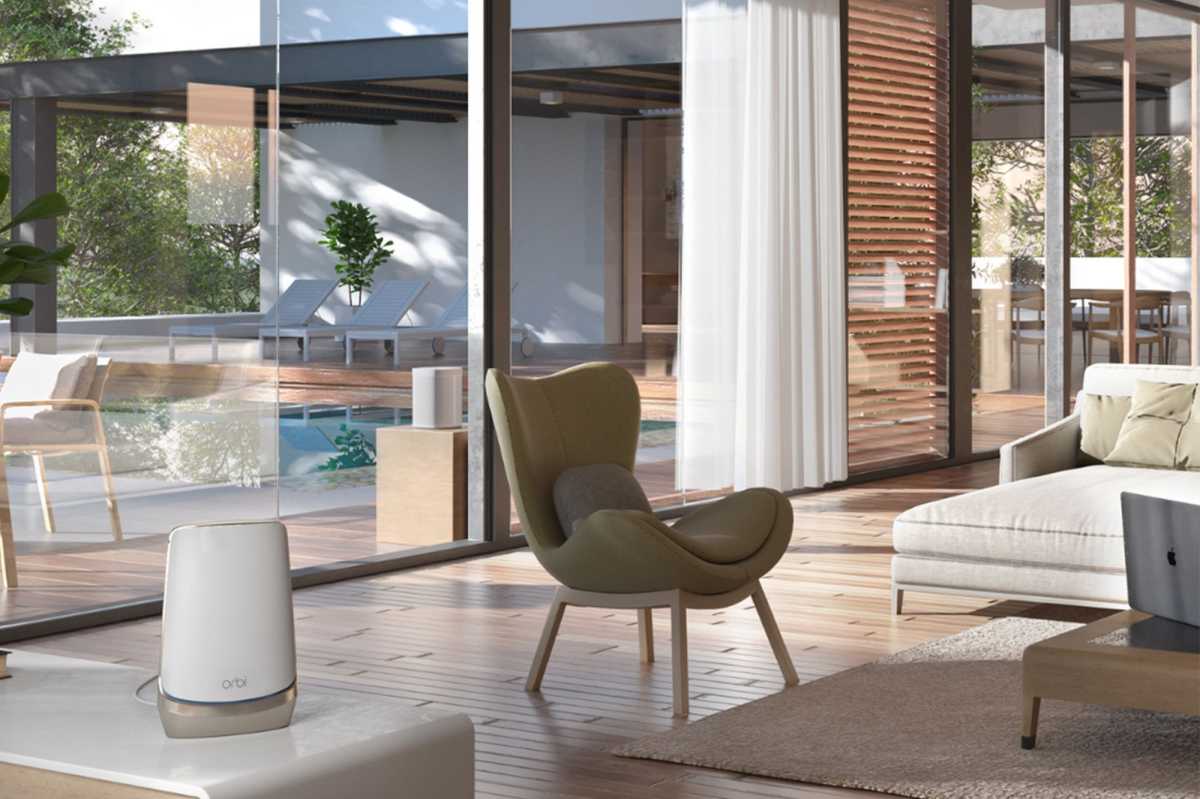 Netgear says their Orbi system is geared toward a good IoT experience as well, offering a separate, WPA2-only IoT network that is unexposed to your home and guest networks for better security and more efficient bandwidth use, and they also claim to have solved issues with fussy IoT devices not rejoining the network after power outages or upgrading router––a pain smart home device enthusiasts know all too well. Beyond a distinct IoT network, you'll also be able to configure a guest network, a combined 2.4 GHz and 5 GHz network for the bulk of your devices, and a 6 GHz network for your fastest devices.

The Orbi system will also use Netgear Armor, Netgear's Bitdefender-powered network security suite, as well as its Smart Parent Controls, which look very much like a network-level version of the iOS Screen Time feature. Additionally, this new Orbi will of course use the updated WPA 3 protocol, which introduces new handshaking protocols and promises to compensate for your bad WiFi passwords by preventing devices on the network from exchanging that password during handshakes, among other important security changes. 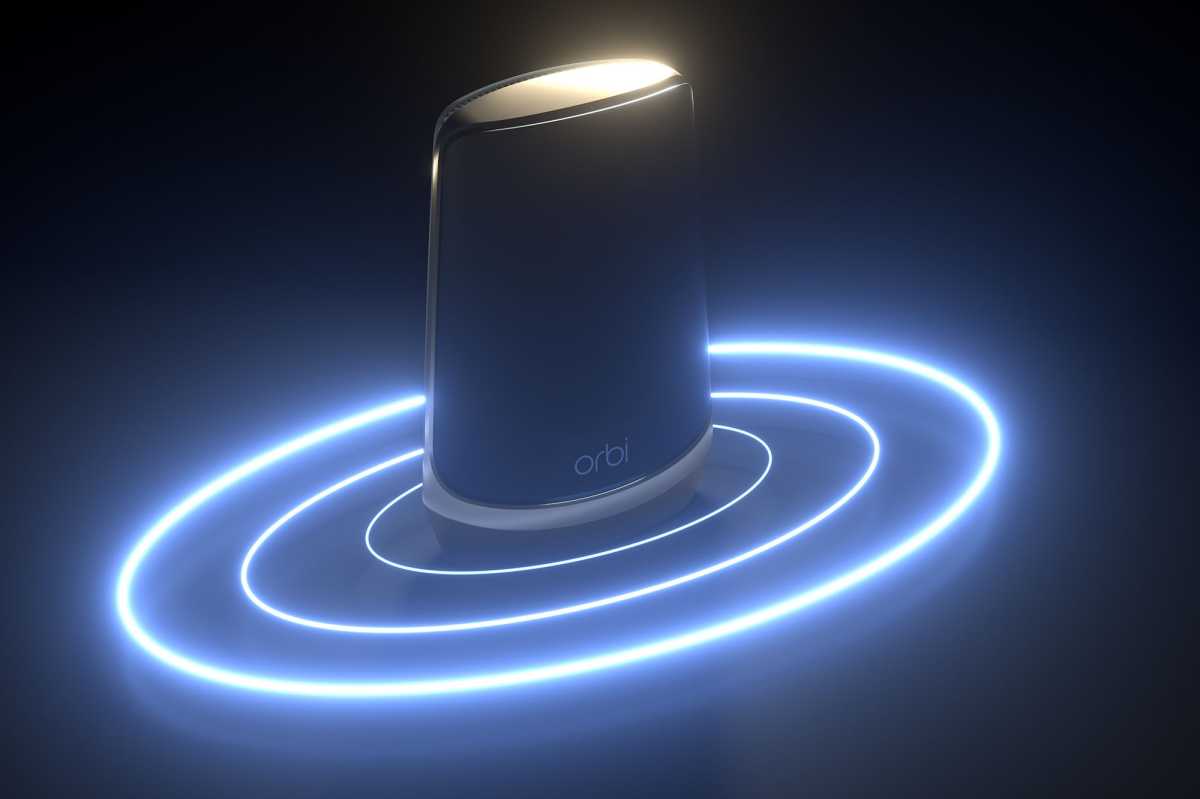 Orbi is the new black: a limited release of Orbi Black Edition is available at Netgear's website Image: Netgear

Lastly, Netgear is releasing a limited edition black version of the mesh system called—you guessed it—Orbi Black Edition. This version of the routers can only be purchased on Netgear's website. Both variants of the Orbi Quad-Band Mesh WiFi 6E system will be available in three configurations: a single unit, gateway plus one satellite, and gateway plus two satellites, rated to cover 3,000, 6,000, and 9,000 sq. ft., respectively. They are available for pre-order in the US for US$1499.99 MSRP for a 3-pack and US$599 for each additional satellite. Netgear has not yet announced availability for Australia and New Zealand or pricing or availability of a 2-pack configuration.