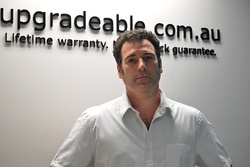 James Hopkin has worked in the Australian computer industry since 1987. He founded Upgradeable.com in 1999 as an independent online source for computer memory upgrades. From day one the Upgradeable way has been to help computer users easily upgrade their systems.

Before you begin the installation, it's worth considering backing up any critical files in the event of a problem occurring. DO NOT install the memory while the computer is in standby or hibernation mode. Ensure that the system is completely powered down.

This is simply done to remove any static electricity from your body so that accidental zaps don't damage your memory modules. While your computer is still plugged into the wall, touch a metal part of your computer. If you leave your computer you will need to ground yourself again. Alternatively, you can invest in an anti-static strap and clip yourself to a grounded piece of metal.

Once the computer is completely shutdown, remove all plugs and the power cable from the computer. As you are upgrading a notebook it is also important to remove the battery.

Always keep the memory modules in their anti-static bag until you are ready to begin the installation. Handle the modules only by the edges and don't touch the gold pins. No tools are required to remove or fit memory modules and using tools can cause damage to the modules.

1. Turn the computer upside down on a flat surface, with the battery bay towards you.

3. Remove the battery (2) from the computer.

1. Remove the three Phillips PM2.0×3.0 screws that secure the keyboard to the computer.

2. Turn the computer display-side up, with the front towards you.

3. Open the computer as far as possible.

Reverse this procedure to install the keyboard.

1. Locate the memory slot once the keyboard has been removed.

2. To replace an existing memory module, spread both clips on either side of the memory slot to release it. To remove the memory module from the slot, hold it by the edges and slide it out at a 45 degree angle.

5. Make sure the upgrade is firmly in the slot and that it's not moving. Otherwise, reinstall the upgrade by repeating steps 2 to 4.

You're done! Once you have closed your computer and reattached all the accessories that were connected, it's time to switch it on. No software or settings will need to be changed as the computer detects the memory upgrade automatically.