The latest models offer traditional keyboard and mouse inputs plus a touchscreen and, usually a stylus too. If that’s not enough there’s also voice control provided by Cortana – Microsoft’s digital assistant who can do everything from logging you in to finding you a restaurant without touching anything.

On top of this, all of them can be converted from a traditional laptop format into a tablet form factor in order to make use of Windows 10’s ability to operate under a traditional desktop environment, or a finger-friendly touch-screen one.

The models we list below all have different strengths and weaknesses. Some are ultralight at the expense of power and some are vice versa. Some look extremely sophisticated and modern but these come at a premium while others are more functional and cost a lot less. There’s something for everyone in our selection. 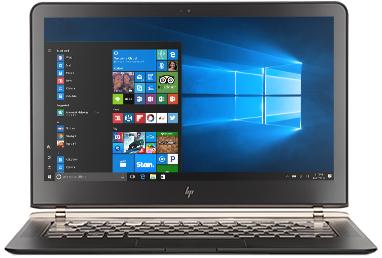 The HP Spectre 360 was one of our favourite laptop-cum-tablets from last year and the refreshed model immediately looks to be an all-round improvement. But there are some caveats.

First up, we love the screen. The new barely-there bezel feels far more refined than its predecessor and the Full HD resolution of the 13.3-inch screen is colourful and comfortable to use – whether for office work or enjoying multimedia. Thanks to Windows Hello, you can log in just by looking at the screen.

It’s solidly built – and it needs to be – because the screen flips all the way round to the back of the keyboard enabling it to become a tablet.

The chassis is 2.1mm thinner than the previous model – it’s now just under 14mm thick which rivals straight tablets for thinness. But the thinner chassis does mean that all of the useful, full-sized ports have gone – all there is left are one standard USB 3.1 port plus two, multi-purpose USB-C ports. HP can supply adapters for all requirements which make use of them, but it’s still something extra to carry around.

Typing on the keys is comfortable and quick and we love using the glass-covered trackpad – it’s one of the best in the industry.

Despite the thinness the quad-array Bang and Olufsen speakers sound impressive as the brand suggests.

It’s fast too – very fast. If ramping up the power makes you more efficient then this needs to make your shortlist. All variants of the new Spectre x360 use the latest Intel Core i7 processors, 8-16GB of RAM plus the blistering-fast NVMe hard drives. This really is a flagship for the modern, Windows 10 ‘Wintel’ ecosystem.

Despite full-day claims, expect around six hours of real-world usage from the battery.

With prices starting at $2,299 the Spectre x360 isn’t cheap but the value is there – especially with its ability to double as a tablet. While its design and price target it towards the business user, the power and the performance on offer make it a great choice for anybody who wants a fast, portable computer. 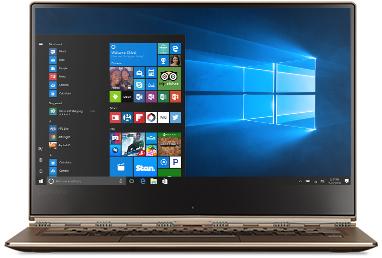 Lenovo’s Yoga has been one of our favourite convertibles for a couple of years. The 910 represents a major overhaul of the 900 series with a more-refined, slimmer chassis and much more power under the good.

The “all-metal” chassis design looks as good as it is strong but the most eye-catching element of this is the “watchband” hinge which is unique in the industry and provides one of the most reliable and easiest-to-use methods of converting from a Windows laptop to a tablet and back again. It both holds the screen up securely while effortlessly allowing it to flip all the way round to the back of the keyboard enabling usage as a tablet. At 14mm, it’s like a slightly-thick tablet but it certainly doesn’t feel chunky.

One of the very best features of the new Yoga 910 is the screen. The 4K display (3,840 x 2,160) is essentially-edgeless with no bezel. We don’t get tired of looking at it but it also makes us more productive by not wasting so much as a millimetre. If you find using such a high resolution a strain on a 13.9-inch screen, you can get a Full HD version instead.

The reduction in thickness has come with a reduction in ports. There’s now one USB 3.1 and two multi-purpose USB –C ports. One of the latter can charge USB devices even when the 910 is powered down.

An interesting design decision is the placement of the 720p webcam at the base of the screen. This can lead to some unflattering-angled video conversations with people. Lenovo expects you to flip the convertible into ‘tent’ mode and have video conversations that way but this makes it harder to use the keyboard at the same time. Still, we can’t simultaneously praise the edgeless screen while criticising the camera placement, so it’s a fair compromise.

The low-rise contoured keys are great for lengthy typing periods and the mouse works as expected. A fingerprint reader makes your data safer and more secure while enabling Windows Hello unlocking.

JBL speakers mean it sounds good and the whole package weighs just 1.38KG. Intel’s latest Core i7 processors keep everything flying and up to 1TB storage is provided. Australian pricing isn’t announced yet, but this is one for anyone’s shortlist. 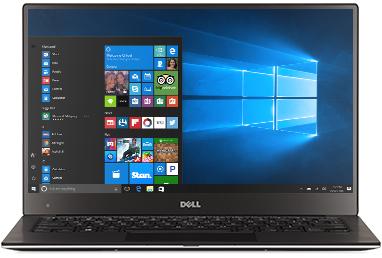 While its competitors are overhauling their machines, the Dell XPS 13 is, for good reason, staying true to its origins. This has been the standard that all other ultraportables have been aspiring to over recent years. The latest version keeps the existing Windows-friendly features on-board while adding while upgrading to Intel’s new Kaby Lake processors – but not a whole lot more. So what do we have now?

Well the processor performance is in line with expectations – it’s ten per cent faster than its predecessor according to our tests. This married to a super-fast NVMe hard disk means it flies along in even heavy-processing tasks.

In a world where everything is shrinking it’s good to see that the battery in the new XPS 13 has got slightly larger. In our tests it played video for a whopping 11 hours.

The screen looks great thanks to its “InfinityEdge” bezel-less surroundings and bright colours and it comes in a variety of configuration options including Full HD, 4K and touch friendly. The latter two will eat into battery life but not everybody needs access Windows 10’s touch-screen enhanced features or squint at small writing all the time. But we are a bit concerned by the unflattering view that the low-positioned webcam gives.

The keyboard is comfortable but may feel a bit small to some people – it’s not the most comfortable to use on the market which could be a deal breaker for keyboard warriors. However, the rubbery trackpad of the previous model has mercifully gone and been replaced with a smoother, more-comfortable unit.

There are still two, regular USB 3.1 ports and one USB-C port which is an attractive configuration in the current market. There’s an SD-card reader too.

From just $1,799 the new XPS represents good value in this market – some phones are nearly the same price these days. However, it hasn’t pushed ahead with its lead and some attractive competitors make for some compelling alternatives. 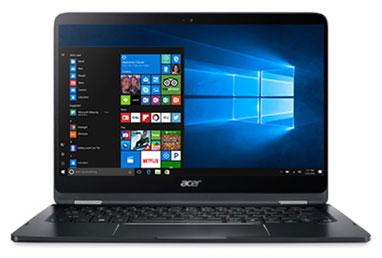 In the world of ultraportables, if you were to hear that a manufacturer was offering a 14-inch model at just $1,249 you’d expect it to be bulky, heavy and, probably ugly. Yet this is what Acer has done and it’s not just ignored those expectations – it’s blown them out of the water.

The larger screen will be more comfortable viewing for many people as Ultra HD screens, while higher resolution, make you squint to see the small writing. The colours are punchy and everything looks crisp. There’s no ‘edgeless’ display – there’s a prominent bezel around the screen – but at least this means the webcam is in the right place. Indeed many competitors have taken to placing it beneath the screen by the keyboard – a most unflattering angle when making that important Skype call.

It has a touch-screen too and can thus make use of Windows 10’s ten-point touch interactions. As with competitors it folds all the way round to the back of the keyboard. When closed in this way it’s just 11mm thick – making it one of the thinnest on the market and more of a rival to a straight tablet than anything else.

In terms of portability, while it’s certainly wider than competitors it still weighs less than many of them at just 1.2KG. However, the quoted eight-hour battery life is some way behind what we’re seeing elsewhere.

Also unlike competitors there aren’t many options available, in fact there’s just one. It sports a 1.3GHz Core i7 processor with 8GB RAM plus a 256GB hard drive. While this is certainly enough performance for most office-related tasks it’s not the fastest on the market and the hard drive could fill up quite quickly.

However, other features are innovative including the MU-MIMO WiFi. If you’ve a compatible router you should get noticeably better WiFi connections even when other, slower devices are on the network.

So while it’s not the fastest or prettiest convertible out there it’s an ideal personal tool to base your life around. It’s got it where it counts and, consequently, that low price is loaded with value. 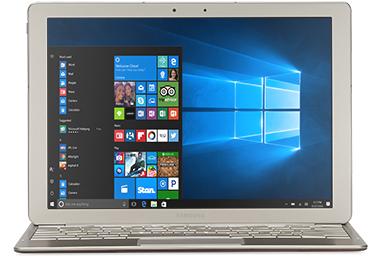 While other convertibles tend to be laptops that can turn into tablets the Samsung Galaxy TabPro S is more of a tablet that turns into a laptop. There are benefits and compromises because of this.

The first benefit, however, is size. At 693g it’s about half the weight of its competitors (which are already very light). More importantly, at 6mm thick it’s half the thickness of its rivals and, all-round, this makes it much easier to use one-handed. This really is the epitomy of personal computing made easier than ever before.

Something we’d like to see more of from convertibles is an AMOLED screen. Samsung really has this technology down pat and the incredible colour vibrancy on offer here is enhanced further with the high 2,160 x 1,440 resolution. However, it is only 12-inches in size which might be a bit small for some people.

The next compromise is power. The TabPro S uses an Intel Core M processor with just 4GB of RAM. Storage comes from 128GB solid state drive. As such, while this is fine for office work and basic multimedia tasks, it’s noticeably slower than competitors, not suited to hard-core processing or even storing lots of information. While the keyboard is relatively comfortable to type on it’s not suited to extend spells but at least a full-size mouse pad is included. However, the thin, faux-leather backing of the keyboard cover makes the whole package look and feel quite stylish.

However, the low-powered components do mean that battery life can be exceptional and over 10-hour usage is expected.

In many ways it feels like an Android tablet, and indeed that’s its heritage, but running Windows 10 brings so many usability benefits including the ability to stream Xbox games remotely to the screen!

So the TabPro is a good bet for people who want a Windows tablet more than a laptop but need to remain productive by having a proper keyboard. It’s something genuinely different in a world of premium ultraportables.

Find out more about Windows 10 here.