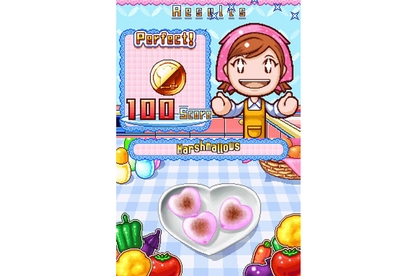 Here's a recipe for all you crazy Cooking Mama fanatics: Add one part Mama who speaks ridiculously poor English, combine with banal WarioWare-esque mini-games, add a hint of uninspired new content, and you'll make one bland serving of Cooking Mama 3: Shop and Chop. Listen, we all loved those novel, fast-paced mini-games when Nintendo first released WarioWare Inc. in 2003, but six years later those games are hardly fresh. So if I can accuse this so-called Mama (there has never been any mention of her offspring, and a person who smiles that much has to be hiding something) of one thing, it would be her stubborn nature regarding gameplay innovation. Dare I say the Cooking Mama has become stale? I dare!

Cooking Mama first hit the scene in 2006 and it sparkled with personality and interesting gameplay that felt new and unique. But three years and a handful of sequels later, the recipe has stayed more or less the same, causing our palates to fatigue, and the the developers attempts to spice up the concoction fall incredibly flat because they not throwing new ingredients into the mix so much as they are just throwing more of what they already had on hand. Its like a chef deciding that his award winning dish needs more flavour, so instead of just adding regular salt, he throws in some kosher salt and some sea salt and some garlic salt as well. Yes, they're all technically different but the flavour, and the end result, is still the same.

A wise Cooking Mama enthusiast might ascertain from the title of this game that the new addition to this storied franchise involves shopping, and he or she would be correct. Gamers now get to take part in the hunt and retrieval of various produce from a local grocery store. But really, all that this new addition ends up being is another venue for more trite mini-games. So in terms of unique content, you won't really find it during this game's shopping portions, and in fact, it really isn't even that creative a way to pack in more of the same. If you ask me, a more imaginative direction would have been to call the game Cooking Mama: Chop and Plop, with the new mini-games taking place in a bathroom.

Yet, what Cooking Mama has always offered -- creative use of the DS's unique capabilities -- is still intact. And while many of us may have tired of this formula back during Cooking Mama 2: Toaster Oven Edition, if you aren't familiar with this game or others like it, you can do a lot worse. Just don't expect any plot to further motivate you through the game, and don't assume that lots of money was spent on localisation (clearly a Japanese woman attempted to voice the part of Mama, and clearly she did not earn her paycheck). That being said, where else are you going to find a game that times how fast you can rip the heads off of shrimp?