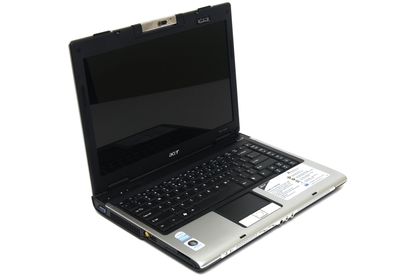 The Aspire 5573ZWXMi is a fairly unremarkable notebook. Its performance results aren't great and there are no particularly redeeming features to counter that. We were, however, impressed by its battery life and budget price tag

Acer's portable Aspire 5573ZWXMi notebook is quite easy on the eyes, but it has little going for it when it comes to raw power. Although it offers all the usual features and connectivity, it didn't hold up as well in our tests. However, it is one of the cheapest models we've looked at recently, so its lower price makes up for some of its shortcomings.

Built with an Intel Pentium Dual Core T2080 1.73GHz CPU, 1GB of DDR2 RAM and an onboard Intel 945GM Express graphics chips it's capable of running Windows Vista and the Aero interface, but our tests show it will struggle with multi-tasking, and is not designed for any heavy processing.

In WorldBench 6, our latest testing software, the Aspire 5573ZWXMi had a few hiccups, failing the Roxio Movie creator test through repeated attempts. Unfortunately, it also failed the photo editing test due to an apparent incompatibility with our testing software, so the total score of 44 in WorldBench 6 is not a clear indication of its true potential. However, a closer look at the results from individual tests shows distinctly slower performance than all Core 2 Duo-based models. The only system that this machine outscored across the board is an AMD Turion X2-based budget model we tested recently, the Toshiba Compaq Presario V3230.

In direct comparison to other notebooks, from casual home-use machines and media centres to powerful desktop replacements (including Acer's own Aspire 9425WSMi) this notebook just didn't match up. Although it still runs basic office applications relatively well, there was a definite performance hit in the multitasking test and even in the Firefox test. Slow performance in these areas will affect most people, right down to casual users. The more CPU intensive tasks such as rendering and encoding will be beyond the reach of this little machine. In our CDEX MP3 encoding test, where we convert 53minutes of WAV files to 192Kbps MP3 files, it was only able to finish the job in 168 seconds; a fairly slow result.

Gaming performance is also fairly poor, though it's unlikely this notebook was ever intended for gaming. In 3DMark 2001 SE the Aspire 5573ZWXMi scored 4010. This indicates that it will play some older games, but only at medium to low settings.

One test this notebook did well in was the battery test. We ran a worst case scenario battery test, where we loop a DVD without a power source. In this test the Aspire 5573ZWXMi lasted for 165 minutes. During this test we noted that this unit's speakers produced a reasonable sound for a notebook, though they aren't all that loud.

The 14.1in screen supports a 1280 x 800 screen resolution and has good contrast levels and reasonable brightness. The viewing angle of the screen is fairly limited, as is the case with the majority of notebooks. Above the screen, built into the bezel is a 1.3megapixel camera, which rotates 180 degrees. We liked the inclusion of a 120GB hard drive, which alongside the DVD-rewriter should handle anyone's storage needs. If storage of a digital photo library is important then the Aspire 5573ZWXMi's 5-in-1 media card reader, supporting SD, MMC, MS, MS-Pro and xD cards will be useful.

The Aspire 5573ZWXMi also comes installed with a PC Card slot as well as both VGA and an S-Video port. Three USB 2.0 ports are available but there's no FireWire. For wired connections there's a gigabit Ethernet port and a 56k modem. Meanwhile wireless is covered by the included 802.11 b/g Wi-Fi.