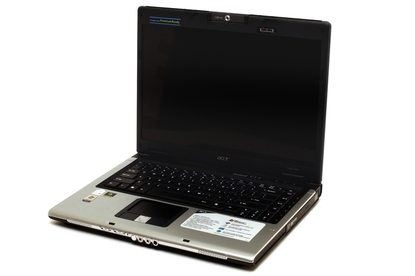 The Aspire 5634WLMi has proved to be a good overall performer and a nice introduction to Acer's Core 2 Duo notebook range. For the price, you're getting an excellent deal.

The 15.4in screen displays at a resolution of 1280x800 and is fairly sturdy apart from some mild distortion when the screen is bent and flexed. Though fairly common to notebook screens, the limited viewing angles of this Aspire, especially vertical angles, can make the screen difficult to see unless you're positioned directly in front. However, the contrast and brightness levels are fairly good, which helps with clarity, and when viewed from the optimum position the screen produces a nice image.

This system comes installed with Windows Media Center Edition (MCE) and bears a number of useful media tools, including a 1.3 megapixel, 180-degree rotatable webcam, an internal microphone, a five-in-one media card reader (x-D, SD, MMC, MS, MS Pro) and a DVD re-writer (dual-layer). A VGA port is also present for outputting to a larger monitor, and there's an S-Video port for television connection. All the usual connectivity options are present, including 802.11 a/b/g wireless, Bluetooth 2.0 and 1000Mbps Ethernet, but unfortunately no Express card slot is included.

Our testing returned good results in both our performance benchmarks and our battery-life tests. With a score of 95 in World Bench 5, it should have more than enough get up and go for all your normal software needs from antivirus to word-processing and Internet browsing. We did find that the 1.83GHz Core 2 Duo processor didn't perform quite as well in our MP3 encoding test (where we encode 53 minutes of WAV files to 192Kbps MP3 files), taking 132 seconds to encode, just over 10 seconds longer than the average 2.0GHz T7200 time of 120 seconds, but still 15 seconds faster than a first generation Core Duo T2400 1.83GHz CPU. Although it's already a powerful enough machine to handle most tasks, the current 1GB of 533MHz DDR2 RAM can be upgraded to a maximum of 2GB, which will give this system a good boost if you need it.

We tested the graphics performance using 3DMark 2001 SE and 3DMark 2006. In 2001 it scored impressively, getting 11,088. This indicated it will run less graphically intense games and most old games easily. However, in the 2006 test it scored a low 675 which suggests any of the latest and more demanding games will struggle.

In all our battery tests, the Aspire 5634WLMi performed well. In the MobileMark 2005 productivity test (simulating day-to-day usage), it ran for 195 minutes and scored 217 points. We also did a DVD rundown test (where we loop a DVD until the battery drains completely), in which it lasted 118 minutes. The sound from the two internal speakers is fairly average, so you might wish to invest in some headphones if you're going to be watching movies or listening to music directly from this notebook. Overall it feels like a sturdy unit that could handle a bit of carrying around.

A DVD Dual Layer recordable drive is included, which can write all the major formats including DVD-DL, DVD+R, DVD+RW, DVD-RW and DVD-R. This comes in handy for backing up media and data should you fill the rather generous 120GB hard drive included in the package.