Acer Aspire 8943G (ZYA) review: A huge desktop replacement laptop that can be used as a media centre The Acer Aspire 8943G is a huge, 18.4in desktop replacement notebook; people will stare and point because it's so ridiculously large. However, it has very good specifications and is useful for just about any home computing task, including gaming.

The Acer Aspire 8943G (ZYA) is a ridiculously big notebook that you'll either love or hate for its outlandishness. It has a massive 18.4in Full HD screen and plenty of horsepower under the hood. It's designed to be a comprehensive desktop replacement or media centre, but one thing's for sure: you'll need a huge desk to accommodate it and it's too big to ever be used on your lap.

Note: the $2999 price is for the version of the Aspire 8943G that has an Intel Core i7-740QM CPU, 8GB RAM and two 750GB hard drives. A price for our review configuration was not available.

The Acer Aspire 8943G (ZYA) has been designed to perform almost any home computing task you can think of, including playing games. With a 3GB ATI Mobility Radeon HD 5850 graphics adapter and an Intel Core i7-720QM CPU, the Aspire can run most games on the market without any problems. However, you won't be able to run many graphics-intensive games at the native 1920x1080 resolution of the screen without noticing some stuttering in the frame rate. This will apply mostly to 3D shooters; role-playing games, sports games and car racing games all ran quite well when we pushed them to the limit.

In 3Dmark06, the Aspire 8943G recorded a score of 8521, which isn't quite as fast as the latest Dell XPS 17 (1710X) (it scored of 10,940). Unlike the Dell XPS 17, though, the Aspire doesn't get too warm while it's processing 3D graphics, so you can continue to use its keyboard. Nevertheless, the keyboard isn't great for gaming (its chiclet-style and the huge palm rest are fine for typing though), so you'll still want to plug in an external one or use a controller.

The performance of the Aspire 8943G in our media encoding tests was as good as we were expecting. In the Blender 3D rendering and iTunes MP3 encoding tests, the Aspire 8943G recorded times of 47sec and 1min 10sec, which are almost exactly the same as the Dell XPS 17 (1710X) despite the Dell having the slightly zippier CPU. The Aspire's Core i7-720Qm runs at 1.6GHz, while the Dell's Core i7-740QM runs at 1.73GHz. The Aspire also has 6GB of DDR3 SDRAM — the same as the Dell — and there are four SO-DIMM slots. 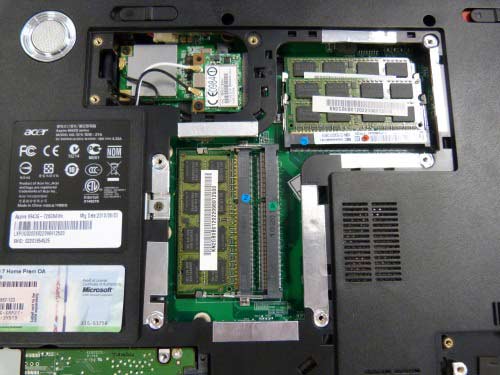 In our hard drive transfer tests, the Aspire recorded an average transfer rate of 33.35 megabytes per second. This is a fast time; it's just under 2MBps slower than what the Dell notebook achieved (the Dell uses a faster, 7200rpm hard drive). The Aspire uses a 640GB Western Digital drive (WD6400BEVT-22A0RT0) with a 5400rpm spin speed. Like the Dell XPS 17, the Aspire has enough space in its base for two hard drives — a second 2.5in SATA drive can easily be installed once you remove the access panel for the second drive bay.

A second hard drive will come in handy if you want to use the Aspire 8943G as a personal video recorder (PVR). It has a built-in digital TV tuner (it ships with an adapter so you can plug in a regular-size antenna connection) and it ships with a Windows Media Center remote control and a built-in infrared receiver, so there aren't any messy extra wires to plug in.

The base has five speakers built into it — two front, two rear and one sub-woofer, which are adequate for when you want to watch TV and movies on the notebook itself. They are not of very high quality though and you will have to put up with a tinny sound that lacks warm low frequencies. In saying that, with the surround speakers, the big 18.4in screen, the Blu-ray player, digital TV tuner and remote control, the Aspire is its own self-contained entertainment unit. It's perfect if you want all this functionality for a bedroom or small rec room. The glossy screen is prone to reflecting lights though, and its vertical angles are as shallow as every other notebook we've seen, but its overall quality is fine watching videos and viewing photos.

Despite its behemoth size, the Aspire ships with a big battery that gives it a respectable life away from a power outlet. In our battery rundown test, in which we disable power management, enable Wi-Fi, maximise the screen brightness and loop an Xvid-encoded video, the Aspire lasted exactly two hours. This is better than many 15.6in notebooks we've tested recently, such as the Samsung R590-JS02AU and the MSI FX600.

Around the edges of the Aspire, you'll find the afore-mentioned Blu-ray drive, as well as four USB 3.0 ports, Gigabit Ethernet, HDMI, VGA, FireWire, eSATA/USB 2.0, an SD card slot and microphone and speaker audio connections. The unit also has a fingerprint reader and a webcam. We wish it had an ExpressCard slot, which could come in handy if you ever want to add USB 3.0, for example, but overall it's a great set of features. Combined with a zippy configuration and a huge screen, the Aspire 8943G makes for a great desktop replacement; that doesn't change the fact that it still looks ridiculously big.