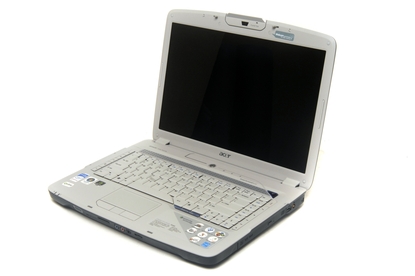 It may call itself a gemstone, but the 5920G (302G20N) more closely resembles a diamond in the rough. Those who are willing to chip away at the ugly exterior will be pleased by what they find inside.

Is it just us, or are notebook vendors getting a tad 'precious' when it comes to naming their offspring lately? In recent years, we've been wooed by the DreamBook, JoyBook, and even the LifeBook (what's next? The BlingBook?). With a grandstanding name like 'Gemstone', Acer certainly seems confident that its flagship notebook range is a cut above the rest. However, while this latest edition is undoubtedly an impressive performer, a few design quirks have taken some of the shine off its sparkly sounding name.

When compared to some of the trendy offerings made by its rivals, Acer's notebooks have consistently failed to strike a good balance between functionality and style. Despite undergoing an exhaustive design process (which apparently involved creative input from BMW Designworks), the 5920G's overall appearance is curiously garish. With its holographic casing, beige plastic interior and array of flashing LED lights, it kind of looks like a 'futuristic' concept device from the 1960s -- presumably not what Acer was going for. Consequently, unless you really dig the spaceship interiors in the film 2001: A Space Odyssey, you'll probably find the 5920G to be downright ugly.

Thankfully, there is just enough grunt beneath its eccentric hood to make up for all this retro tackiness. The version we tested came equipped with a 2GHz Core 2 Duo T7300 processor built on the latest Centrino Duo platform -- a step up from the previous model's T7100 CPU (Aspire 5920G (102G16H)). The inclusion of 2GB of DDR2 RAM will ensure that the unit zips along in taxing situations, while its dedicated NVIDIA GeForce 8600m GT graphics card should fulfil the majority of your graphical needs; including gaming.

In 3DMark 06, the 5920G (302G20N) achieved a score of 3175. This is an impressive result which should see all but the most graphically intensive titles chug along at an acceptable rate. In Worldbench 6, it landed an overall mark of 78 -- again, this is a very good score. It will easily handle most commonly used programs, such as Adobe Photoshop, as well as video encoding and rendering applications. In other words, while it's not quite a desktop replacement model, it will ably handle the majority of what you can throw at it.

In terms of build quality, the Gemstone 5920G (302G20N) is a fairly solid machine in most of the areas that matter. Its 15.4in widescreen display remained bright and crisp in a variety of environments, though the glossy nature of the screen may cause viewing issues at certain angles. The in-built pair of subwoofer-assisted stereo speakers produced impressively rich audio, although curiously, we did find them a little lacking in the volume department. Meanwhile, media enthusiasts are bound to enjoy the Crystal Eye camera which has been cunningly built into the inside of the lid's latch.

While it lacks a dedicated number pad, the keyboard offers two sets of customisable buttons, media controls for DVD playback, a dedicated sound equaliser and application launch buttons. Typing proved to be a breeze thanks to the responsive, oversized keys and assortment of handy shortcuts.

The 5920G (302G20N) has also been installed with an HDMI output and Acer's 'Arcade' interface, which provides direct access to HD-DVD movies. Unfortunately, the model we tested wasn't equipped with a HD-DVD ROM drive and its screen only offers a maximum resolution of 1280x800, so we can't attest to its high-def capabilities. Apart from the HDMI port, there's plenty of other connectivity including a S-Video and VGA port, four USB 2.0 ports, a media card reader supporting SD, MMC, MS, MS-Pro and xD cards and one mini FireWire port. The unit has Bluetooth as well as Wi-Fi 802.11a/b/g and a 56Kbps modem, not to mention gigabit Ethernet

The Aspire also performed well in our battery test. By looping a DVD, which uses the speakers and the optical drive for maximum drain, we managed to run down the battery in 142 minutes; a good result. This test is considered a worst-case scenario, so normal usage will keep the notebook going for longer.