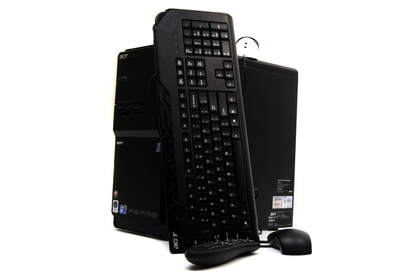 The Aspire M3800 is a media centre PC that looks good and has plenty of features and CPU power. It's not perfect — it could still use more integrated features — but it's worth considering if you're after a PC that can be used for conventional work as well as for watching and recording digital TV.

Acer's Aspire M3800 is a media centre PC with good looks and fast performance. It's suitable for anyone who wants more than just a basic PC. With it, not only can you run your favourite office applications, you can also run Windows Media Centre to watch and record digital TV, as well as access all your videos, photos and music files.

We haven't really seen media centre PCs evolve much since Windows Media Centre was launched (only a few vendors, such as Claritas, ever designed proper media centre PCs). The Acer Aspire M3800 is no exception: it's stuck with a traditional PC design that's more suited to an office or bedroom than a living room. It's a tower PC with a micro-ATX form factor and although it has all the features you would need of a media centre, it's not a refined PC.

There are memory card slots on the front of the PC that support every major card format on the market, and there are USB ports on the top of the PC. As such, you don't know wether you should place the PC on the floor, which would make it hard to access the memory slots, or up high, which would make it hard to access the USB slots. Since the power button also resides near the top of the case, we'd go for a floor-standing position. Another consideration is the remote control's dongle. This isn't built in to the case and has to sit somewhere outside it if you want to use the supplied remote control to launch Windows Media Centre. With plenty of space available behind the front panel, it would have been nice if Acer had placed this dongle inside the case.

On the inside, the Acer Aspire M3800 media centre PC features an Intel Core 2 Quad Q8300 CPU, which is a quad-core CPU that runs at 2.5GHz. It gives the M3800 the ability to multitask freely and this is also aided by the 4GB of DDR3 memory that's installed. In WorldBench 6, it scored 110, which means it will capably handle almost any task you throw at it. You will be able to transcode media files relatively quickly, and even use it for 3D rendering. This was highlighted in the Blender 3D rendering test, which used all of the CPUs four cores to complete a 3D rendering workload in just 38sec.

Another area in which the Aspire M3800 shined was in the hard drive test. It recorded an average transfer rate of 39.6 megabytes per second, which is a speedy result for a typical desktop PC. The hard drive in the Aspire M3800 is a 7200rpm, 1TB Hitachi Deskstar 7K1000 (HDT72010SLA360) that's been partitioned to give you a 458GB system drive and a 458GB data drive. The large capacity of the drive will come in handy when using the Aspire M3800 to record TV shows.

The Acer Aspire M3800 ships with a hybrid TV tuner, which gives it the ability to tune in to digital and analog TV stations. We would have preferred a dual digital TV tuner, though, which would have allowed up to two programs to be recorded simultaneously. While free-to-air TV has usually had slim pickings, One HD and Go! now provide more viewing options, so being able to record two programs at once is a feature that many of us are starting to crave.

You can watch TV either on a monitor attached to the PC or on a big-screen TV using the HDMI port. The PC's graphics card is an ATI Radeon HD 4650, which supplies adequate 3D performance for mid-range gaming (it scored 5486 in 3DMark06), but most importantly it can carry audio over its HDMI port, so you can just run one cable from your PC to your receiver or TV. 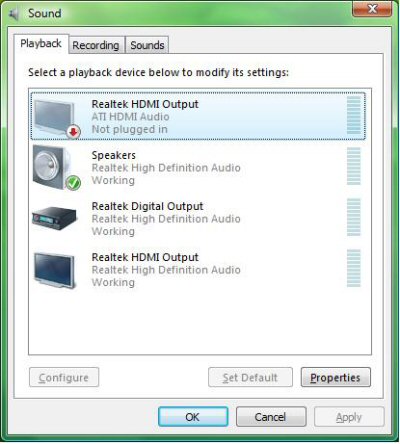 You might have to play around with the audio settings in Windows Vista if you are not getting sound from the HDMI port straight away (you'll have to select the Realtek HDMI Output-ATI HDMI Audio in the Volume Mixer).

The Aspire M3800, despite its tower design, looks good enough to be placed in a living room; it's black and has glossy panels. The power and hard drive LEDs are not overly noticeable as they don't reside directly on the front panel. Most importantly, the M3800 doesn't make a lot of noise when it runs.

Most ready-made PCs are generally boring on the inside, and the M3800 is definitely up high in the drab stakes. The only interesting aspect of its innards is the huge CPU fan shroud, which directs cool air from outside the case (via the vent holes in the side panel) directly onto the CPU heat sink. The fan on the CPU heat sink runs relatively slowly and is barely audible. The other two fans in the system — the power supply and graphics card fans — are equally quiet. You'll probably hear the hard drive accessing data more than you will the whir of the fans.

Because it uses a micro-ATX motherboard and case, there isn't a lot of room for upgrades as your needs change. There is space for one more hard drive, as well as another optical drive, and the motherboard has two free PCI slots and two free memory slots. We wish it had two PCI Express slots free instead; unless you already have some PCI cards that you want to install, chances are these slots will never be used. There are two occupied PCI Express slots in this system, taken up by the graphics and TV tuner cards.

Nevertheless, this isn't a major issue and most upgrades these days are done via USB 2.0 ports, of which this PC has 10. It also has FireWire, Gigabit Ethernet, optical audio output, DVI, D-Dub and PS/2 ports, as well as S-Video input and RCA audio input ports. You get a remote control as well as a corded keyboard and mouse. The keyboard has a great big volume control and media buttons on it, but considering the nature of this PC, and the likelihood it will be connected to a TV at some point, a wireless keyboard and mouse combination would have been better.