A small, fast and well-designed Acer PC that can be used as a media centre With the Acer Aspire M5811, you'll get a PC that's fast and useful for a whole range of tasks, including video editing. With its digital TV tuner, it can even act as a PVR. We like its design and think it's a great value PC if you're after something that offers plenty of speed. The only drawback is that it can't be used extensively for gaming.

Acer's Aspire M5811 is a good-looking little tower PC that's perfect for home users and students. It's reasonably small, has lots of easy-to-reach ports, and, best of all, it's very quick. It's based on Intel's Core i5-650 CPU and it has 4GB of DDR3 RAM and an ATI Radeon HD 4650 graphics card, so it will easily churn through office applications, imaging and video editing tasks with ease. You'll even be able to play a few games — as long as you're willing to sacrifice fancy graphics.

The Acer Aspire M5811 is exclusive to Harvey Norman and costs $1499 (without a monitor) — and it's well-worth checking out. Apart from the fast CPU and plenty of RAM, this desktop PC also comes with a 1TB hard drive, a DVD burner and a digital TV tuner card. Windows 7 Home Premium (64-bit edition) is installed, and you also get a little remote control. Using Windows 7's built-in Media Centre functionality, you can rest in your chair or lie in your bed as you use the PC to watch (and record) TV shows, as well as DVDs and other video files. You can only watch one TV channel at a time, as there is only one TV tuner.

A receiver for the remote control is not built-in to the PC, so you have to plug in an external one and find somewhere to place it. The peripherals that ship with the PC are corded, so you can only use the Internet while sitting at your desk rather than lounging around. You could always substitute them later on with your choice of cordless peripherals.

While the Acer Aspire M5811 has decent media centre credentials, its speed in office applications and its media encoding and editing capabilities is what make it a worthwhile candidate for your cash. Its Intel Core i5-650 CPU runs at 3.2GHz and has two cores and Hyper-Threading, so it can work on up to four programs at once. Multitasking is a breeze, and applications that support multithreading will run quicker than they would on a non-Hyper-Threaded dual-core machine. This was shown in the Blender 3D test, in which the PC recorded a time of 44sec when using four threads to render a 3D image. This is only 2sec slower than what a machine based on a Core i5-661 CPU can achieve while running at 3.3GHz. The Core i5 has the ability to overclock itself if the system conditions are right, and the Aspire M5811 actually hit a maximum of 3.325GHz when processing a full load.

Another area in which the Aspire M5811 is fast is hard drive transfers. It recorded 58.8 megabytes per second in our file copying tests, which is actually faster than what the Alienware Aurora ALX scored in the same test. There is no RAID setup — it just runs a single 1TB hard drive with a 7200rpm spin speed. As the drive fills with data it will get slower, but right out of the gate you will get great performance.

Overall the Acer Aspire M5811 is zippy. It feels quick when loading applications, switching between programs and generally using the Windows 7 interface. It had no problems finding all of the available TV channels in our area and playback and recording was smooth. The only area in which the Acer isn't fast is 3D graphics processing. It has an ATI Radeon HD 4650 graphics adapter with 1GB of dedicated RAM, but it won't be able to run the latest games at high resolutions and high detail. Basically, if you want to play some of the latest games on this machine, you'll have to do so at a resolution of around 1024x768 and without high image details in order to get playable frame rates.

On the inside of the Aspire M5811 you get a Micro-ATX form factor motherboard that has room for a little expansion. You can add another two sticks of RAM into its two free DIMM slots; you can also add expansion cards via the board's free PCI Express x1 and PCI Express x4 slots. The motherboard has plenty of connectivity for external peripherals: 10 USB 2.0 ports, one FireWire port, two eSATA ports, Gigabit Ethernet, and digital and analogue audio ports. The graphics card has HDMI and DVI ports, so not only can you connect the PC to a monitor, but also to a big-screen TV. 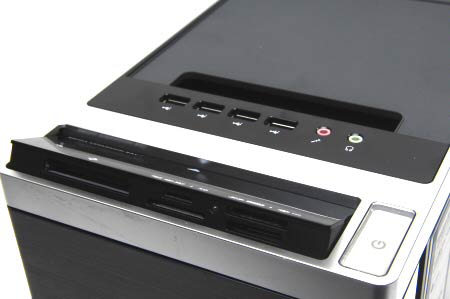 A concealed panel (see above) on top of the PC at the front can be lifted to expose four USB 2.0 ports, microphone and headphone ports and a multiple card reader. It's a very convenient design — especially if you place the PC on the floor. A flap at the top of the case can also be opened to expose a compartment that can be used to house USB cables or USB keys. Or you could just use it to rest your phone, MP3 player or hard drive when they are connected. This would get the cables out of the way of the DVD drive so they don't accidentally get caught up when you're removing a disc.

Apart from the good hardware and nice design, Acer has furnished the Aspire M5811 with backup and recovery software that makes it easy to recover from a system crash and to keep your personal files safe. 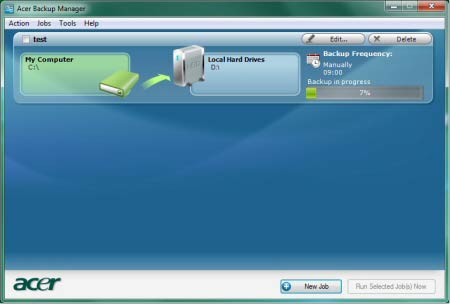 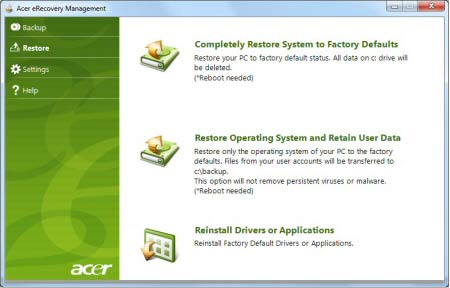 You can use Acer's eRecovery Mangement to get your PC back to the way it was when you bought it, or just use it to fix any problems caused by bad software installations.

The bottom line is, the Acer Aspire M5811 is a great little desktop PC for anyone who wants plenty of speed and storage, and a relatively small footprint. It can be used as a media centre or for productivity, and it's not very expensive. We wish it had an integrated receiver for the remote control and that it shipped with wireless peripherals for the asking price, but these are just minor quibbles.