Acer Aspire S3 review: Being first to market isn't always a good thing and the S3 suffers from a lack of features and refinement 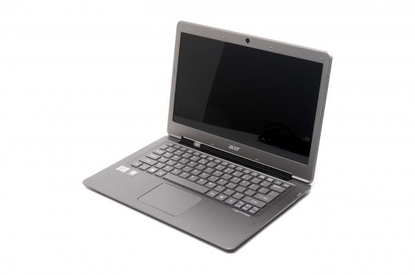 While Acer is the first vendor to get its Ultrabook 'out there', the Aspire S3 unfortunately suffers from a lack of features and just feels a little underdone overall. It could use a backlit keyboard, some more connectivity (such as USB 3.0 and Gigabit Ethernet) and we think a solid state drive should be standard for the price you're paying.

The Ultrabook, the MacBook Air equivalent for Windows users, has arrived. Acer's 13in Aspire S3 is the first of these new laptops to hit the Australian market. Upon seeing it, its smooth styling and thin design is likely to activate that particular zone in your brain that's responsible for telling you to go out and buy things. However, don't make any buying decisions just yet. Being first to market isn't always a good thing and we came away thinking that the Aspire S3 perhaps might not be as good as some of the Ultrabook models we're going to review from Acer's competitors.

Don't get us wrong, the Aspire S3 is a clever device and it's very capable of handling everyday computing tasks and more, but at 1.35kg — and it seems a little crazy to say this — it does feel like it's a little too heavy. The thing is, if you're used to carrying around a 15in notebook, or even a smaller 13in model with a 1.5-2kg weight, the 1.35kg of the Acer S3 will be a Godsend. But if you've handled many thin and light notebooks before, you'll probably think that this model could have been made lighter.

The Aspire S3 uses magnesium alloy and aluminium for its body, which are the same materials that we're going to see from the other Ultrabook manufacturers. It has a slim profile that's thicker at the back (approximately 18mm) than it is at the front (approximately 12mm) and it feels solidly built. It's not as refined as we expected it to be though. For example, its hinges are a little too strong and don't allow the lid to be lifted open with one hand when the notebook is sitting flat on a desk.

Around the Aspire S3's thin edges, you won't find much. It's a minimalist laptop that supplies only the barest of essentials. The left side of the unit has a combination headphone and microphone port, and that's it. The right side has an SD card slot, and that's it. The rear has two USB 2.0 ports, an HDMI port, and that's it. You don't get an Ethernet port and you don't get a VGA port. You don't get USB 3.0 either, as this isn't yet built in to Intel's chipsets and Acer has not used a third-party controller to supply this functionality. Bluetooth and 802.11n Wi-Fi (single band) are available, and you also get a 1.3-megapixel webcam.

As one of the slightly better priced Ultrabook options on the market (at $1399 it's still not as cheap as it should be though), the trimming of the feature set is understandable. It might upset tech users who want to have different options at their disposal and get more bang for their buck, but mainstream users who just want a basic and easily mobile laptop for everyday work should get by just fine.

On the inside, the Aspre S3 features an Intel Core i5-2467M CPU, 4GB of RAM, and integrated Intel HD 3000 graphics. There are two storage parts installed: one is a 320GB Hitachi hard drive with a spin speed of 5400rpm (and a thickness of 7mm so it can fit into the chassis), and the other is a solid state drive (SSD) with a small capacity that's built in to the motherboard.

The built-in SSD is not available for data storage (you can't see it in Windows Explorer, for example); it's there to boost the boot-up performance of the laptop and allow it to wake up quickly from sleep and deep sleep modes. In our tests, a cold boot to Windows 7 took around 25sec — a decent time. Coming out of sleep mode though, the laptop was usable the moment the lid was lifted — we're talking about less than a second. When the laptop was in a deep sleep, it only took a couple of seconds to become useable after pressing the power button. This was impressive.

In our performance tests, the Aspire S3 turned in results that we expected out of its low-voltage, 1.6GHz processor. It recorded 1min 02sec in the Blender 3D rendering test, 1min 16sec in the iTunes MP3 encoding test and 1hr 16min in the DVD-to-Xvid file transcoding test. These times are a little slower than those recorded by the Acer TravelMate 8481G, which is a 13in laptop that has the same CPU, but uses an SSD drive for primary storage rather than a spinning drive. In our file transfer tests, the difference in storage performance was evident: the Aspire S3 recorded 28.26 megabytes per second (MBps), while the TravelMate with its SSD recorded 81.53MBps.

You can use the Aspire S3 Ultrabook for typical office tasks and multimedia. It has no trouble handling high definition video and as you can see from our tests, it will even perform rendering and transcoding tasks, albeit slower than a notebook with a full voltage CPU and faster storage. You can't play too many games on it though, and this was shown by its score of 3293 in 3DMark06, which is quite low, but still respectable for an integrated graphics solution.

The 3-cell lithium polymer battery of the Aspre S3 isn't removable (along with the RAM and hard drive) — not unless you're prepared to undo a lot of screws — and the laptop didn't last as long as we expected it to. In our rundown test, in which we disable power management, enable Wi-Fi, maximise screen brightness and loop an Xvid-encoded video, the laptop only lasted 3hr 26min.

This is 23min less than the aforementioned TravelMate. Granted, that laptop also used an SSD so with an SSD in the S3, the longevity should at least equal it. A 240GB SSD is an option for the S3, but it boosts the price to $1699. If you lower the S3's screen brightness and use the laptop for basic Web browsing and document creation, it should last you around four or five hours, but it's still a little shorter than we expected from an Ultrabook.

The Aspire S3's input devices are decent, but not standouts in their field. The touchpad is large (87x64mm) and its left- and right-click buttons are concealed underneath the pad. This is a design that we first saw in HP models, such as the Mini 210, which used the 'Clickpad'. This design provides a lot more area for moving the pointer, but it means you can't distinguish between the buttons easily, and it can also make drag-and-drop copy operations a little awkward. The responsiveness of the pad was good in our tests and it recognised multi-finger gestures without any issues. However, its ELAN driver software assigns two fingers for swiping back and forth in a Web browser, rather than three fingers, which is what we're used to from Synaptics pads.

The keyboard has chiclet keys that are almost full-sized, with the exception of the tiny arrow and Page Up and Page Down keys in the corner. Its not a backlit keyboard, and this is a sore point for us, especially considering that the Toshiba Satellite Z830 has one (and it also has other features that the Acer lacks). It's a keyboard that takes some getting used to, and that's because its keys feel a little too resistive and 'squishy'. We made a lot of errors while typing until we got used to these traits and hit the keys a little harder. We'd prefer the keys to be more crisp and softer to hit.

Using the S3 Ultrabook for a while in your lap means it will get a little warm on its underside, especially if you are performing tasks that require the CPU to do lots of work. A little fan is present in the system and there is a vent at the rear of the laptop through which warm air is pushed out. There aren't any other vent holes in the chassis to draw cool air inside. It can be a loud Ultrabook at times as its fan spins up fast to keep the guts cool and it can get annoying. It's dynamically controlled and spins up and down as needed, which sometimes means that you can clearly hear it revving up and down.

We're not fans of the glossy screen, which reflects lights and often requires adjustments to its tilt angle so that colours in photos can be seen properly (this is by no means unique to the S3 in the notebook market, but still worth mentioning). It has a native resolution of 1366x768, which is the same as the Toshiba Satellite Ultrabook, but lower than the ASUS UX31 Ultrabook's 1600x900. We wish the screen had a matte finish and that its contrast and vertical viewing angles were a little better because we spent a lot of time moving it up and down so that we could see things properly.

All things considered, we think the Acer Aspire S3 suffers a little from being first to market. It has few features, feels a little heavy for what it is, it's screen isn't great, it lacks a backlit keyboard and an SSD isn't standard for the price — the 240GB SSD model costs $1699. It's very much a basic Ultrabook with the only things going for it being its thin design (and small power adapter) that makes it easy to transport, and also its very quick resume time when it's in sleep mode, which allows you to get back to work within two seconds of opening the lid. If it was all alone in the PC market with no competition, we'd say go for it, but considering the Ultrabooks it's going up against, such as the Toshiba Satellite Z830 and the ASUS UX31, it's just not a tasty enough treat, not unless you can find it on sale for much less than its recommended retail price.