Review: Acer's Aspire Timeline Ultra M3 is an Ultrabook that wants to be a regular notebook, only thinner The Acer Aspire Timeline Ultra M3 is a very good notebook overall, offering exceptional performance and battery life. It's also well built and stylish. However, we wish it had some ports on the sides and that there was a little more room for the left palm rest.

At 15.6 inches, 2.1kg, and with a built-in optical drive, a discrete graphics adapter and a Core i7 CPU, it's hard to consider the Acer Aspire Timeline Ultra M3 an Ultrabook. It feels too big to be in the same class as many of the other Ultrabooks that we have seen — and it must be said: it can be a pain to carry around every day due to its width. Nevertheless, it offers a thin chassis, a decent set of features, high performance and very good battery life.

It's a laptop that should appeal to those of you who want a good, all-round laptop that's slim, yet well stocked. Acer has packed in a DVD burner on the left side of the unit, three USB ports (one of which is USB 3.0), full-sized HDMI and full-sized Gigabit Ethernet. Unfortunately, all the ports are located on the rear of the laptop, which makes it inconvenient to perform simple tasks such as plugging in a thumb drive — not to mention forgetting they are plugged in and then angling the laptop in such a way to potentially cause the drives damage (USB extender cords are a Godsend when using this laptop). The entire right side of the laptop is bare, which makes the placement of all the ports on the rear that little bit more frustrating. As the audio port is also at the back, you'll need headphones with a long cord, too.

The overall design of the Aspire Timeline Ultra M3 is quite nice. It features a matte styling for the base and the bezel around the screen, although the screen itself is still glossy and will reflect lights. The hinges that hold the screen are strong and the unit feels well built with barely a hint of flexing when you pick it up with one hand from either side. In fact, it feels so solid you'd be hard pressed knowing it had an optical drive installed unless you specifically looked for it.

Another thing you'll have to look for on this laptop is the power button. Unlike most laptops on the market, which have their power button placed on the bezel above the keyboard or on the left or right sides of the chassis, the Acer can only be turned on from the front. It's a flat button that sits just near the vicinity of the touchpad and it can sometimes get in the way during regular usage. If you use the notebook on your lap while you type, there is a chance that it can be accidentally pressed. This happened to us a couple of times and we ended up shutting down the system while composing emails; good thing we work in the cloud. Incidentally, it took the laptop around 35sec to boot from an off state and less than 2sec to wake up from sleep mode.

There is a packed-in keyboard with responsive keys that is quite comfortable to type on. However, it's not backlit and it also could use a little more room on its left side. The palm rest on the left side of the touchpad is only 83mm wide, and it sometimes felt cramped. We'd like an extra one or two centimetres there, but with that said, we did get used to it after a few typing sessions. The reason the keyboard is packed in so tight is because Acer has also included a full number pad on the right side. This is great for those of you who frequently crunch numbers, but we reckon removing it and centring the keyboard would make for a much improved user experience.

The touchpad is a massive one at 107x78mm and it worked acceptably during our test period. It's an ELAN pad that supports multi-finger gestures, so you can perform two-finger scrolling and two-finger flicks while Web browsing, for example. Left- and right-click buttons are located underneath the pad and we didn't have any problems performing drag and drop operations using either button.

Sound comes out through two speakers that are located under the front lip of the laptop, and they can very easily be muffled when the laptop is not sitting on a flat surface. They are decent speakers for a thin laptop, but should only be relied upon for very casual listening. Plug in some speakers if you listen to music that has lots of low frequencies, otherwise you might not hear them.

For getting online, the laptop comes with a single-band, 802.11n Atheros AR5B97 Wi-Fi module, which worked fine during our test period. 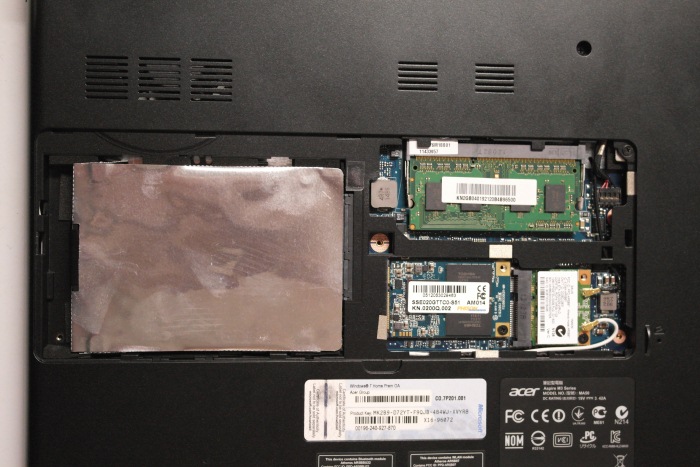 There is an access panel on the base that provides quick access to the storage, RAM and Wi-Fi components, but you'll void your warranty if you open it. 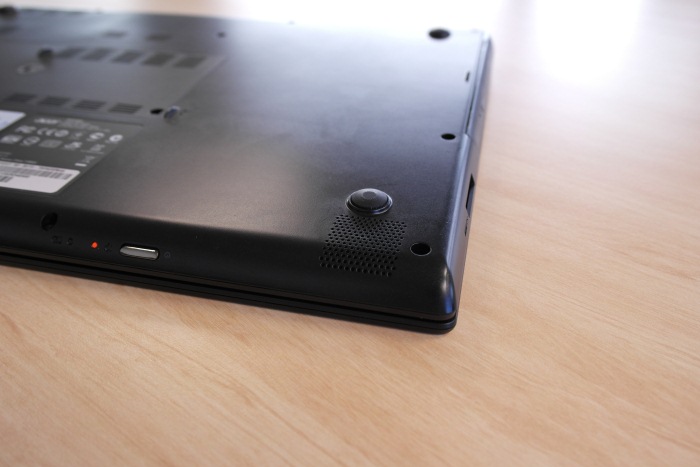 The speaker holes are basically on the underside of the laptop and very easy to block.

Unlike most Ultrabooks, the Aspire Timeline Ultra M3 makes use of an Intel Core i7-2637M CPU, which has two cores plus Hyper-Threading, and it runs at a frequency of 1.7GHz, with a Turbo Boost speed of 2.8GHz. The configuration also includes 4GB of DDR3 SDRAM, an NVIDIA GeForce GT 640M graphics adapter and a hybrid storage solution consisting of a 5400rpm, 500GB Hitachi hard drive (HTS545050A7E380) and a 20GB solid state drive. Furthermore, it has Optimus graphics switching technology that allows it to use the integrated Intel HD 4000 graphics for non-demanding tasks.

In our Blender 3D rendering test, the Timeline recorded 48sec, while in our iTunes MP3 encoding test it recorded 57sec. Both of these times are faster than other "big" Ultrabooks we've seen, such as the 14in Samsung Series 5 ULTRA and 14in Toshiba Satellite U840. Those laptops use the Intel Core i5-2467M CPU, which has a 1.7GHz speed and 1MB less cache (3MB as opposed to 4MB) than the Core i7-2637M CPU. Our AutoGordianKnot DVD-to-Xvid encoding test was also much faster on the Acer system, recording a time of 59min as opposed to 1hr 11min for the Samsung and 1hr 10min for the Toshiba.

The Acer's graphics performance is unparalleled for an Ultrabook to date. Its NVIDIA GeForce 640M adapter, which has 1GB of RAM, recorded 11210 in 3DMark06 and P1823 in 3DMark11. It's powerful enough to run modern games such as Battlefield 3 at the screen's native resolution of 1366x768, and it should be considered if you're after a slim gaming notebook instead of a bulky behemoth.

When under a full load, the notebook's fan spins quickly and dynamically, so it's not a constant high-spinning action. It's audible in a quiet room, but shouldn't be too distracting otherwise. The right side of the unit gets a little warm when undertaking CPU or graphics-intensive tasks, but not to the point where it becomes very uncomfortable — the size of the unit might be more of a factor when it comes to comfort. 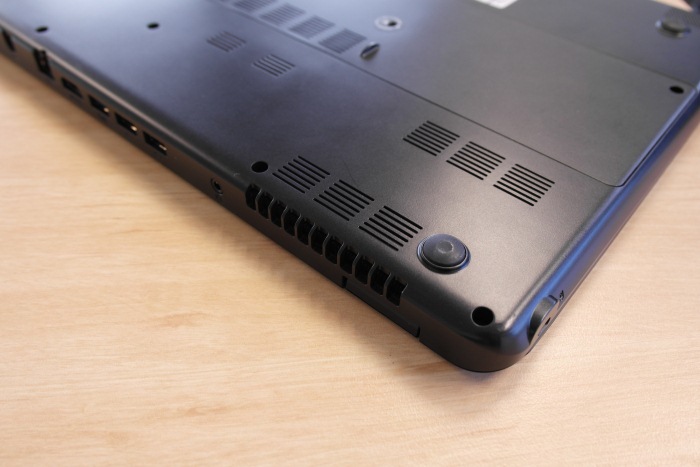 The air vents and exhaust.

Storage performance was decent, recording an average of 31.64 megabytes per second (MBps) in our file transfer tests, which is a tad lower than what the Samsung Ultrabook recorded. Its read time of 102MBps in CrystalDiskMark is faster than the Samsung's 88.1MBps, but it suffered a little in the write test, recording 85.4MBps compared to 87.93MBps. We didn't have any problems with the Acer's responsiveness during regular usage; we launched applications, multitasked and browsed the Web without noticing any lag, but we did have to put up with nagging screens from some of the installed software.

The Timeline Ultra M3's battery is sealed in the chassis and can't be easily removed or replaced. This is part of what helps the chassis be so slim and solid. In our rundown test, in which we disable power management, enable Wi-Fi, maximise screen brightness and loop an Xvid-encoded video, the laptop lasted 4hr 45min.

This is a very good time for a 15.6in notebook with a Core i7 CPU and it's even better than the 4hr 4min recorded by the 14in Toshiba U840. If you employ a sensible power management scheme and only use the notebook for basic Web browsing and office tasks, the Acer can last even longer. Its time was recorded using the integrated graphics of the CPU, but it would be lower if the NVIDIA graphics were used.

The Acer Aspire Timeline Ultra M3 is a good notebook overall, and that's what we'll call it: simply, it's a slim notebook. It has a powerful configuration and a built-in optical drive and its battery life is very good. It's a little too wide (376x227mm) to carry comfortably on an everyday basis, but it's not overly heavy and it's still quite slim at about 21mm. We like its looks and build quality, and the price is right also. However, we wish that it had ports along the side and not just at the back.