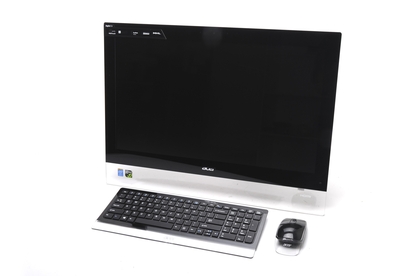 Acer's Aspire U5-610 is a 23in all-in-one PC that's fine for most typical home tasks. It's best suited to anyone who wants a touchscreen interface, and also to anyone who needs a desktop PC without a clunky tower box and messy cabling requirements.

All-in-one desktop PCs aren't new kids on the block, and they've also never really been all that popular as household computing devices. While the mobile market has shifted to touch devices and mostly flourished, all-in-one desktops with touchscreens are still trying to find their feet (and hands) in the PC market. Acer, among some other manufacturers, is leading the charge in this market. The company's latest U Series all-in-one desktop has been around for a while, and now it has better gizzards, including a fourth generation Intel Core i5 CPU. But is it worth considering as a replacement for a traditional desktop?

There's no doubt that Acer's Aspire U5-610 is an interesting product. With a 23in, Full HD, capacitive touchscreen, it throws up some different usage scenarios as far as user interaction is concerned. Primarily, the touch aspect allows the screen to be used directly for things such as browsing through photos (simply swipe across the screen to get to the next one), selecting music (tap on an album cover to listen to it), and playing games (such as the point-based and swipe-based games that are available in the Windows Store). It would make a decent family computer for these reasons, and it has enough grunt on the inside to be enjoyable for the tasks we've mentioned; it's not for those of you who are after a traditional desktop experience.

Setting up and using the Aspire U5-610 all-in-one is very easy, thanks mainly to the fact that it's a self-contained unit. You don't need to plug in anything except for the power adapter, which is similar to that of a notebook. In fact, the Aspire U is largely based on notebook components that reside in a slim housing behind the 23in screen. The keyboard and mouse are both wireless, speakers are built in, and, of course, there is no need to plug in the monitor.

You get a similar amount of features to a regular desktop, including a DVD burner on the right side, audio input and output, USB 3.0, and an SD card slot on the left, and Gigabit Ethernet, more USB, and audio and video ports along the rear bottom lip. In fact, it's this rear area that gives the Aspire U5-610 plenty of versatility.

While the unit has integrated 802.11n, dual-band Wi-Fi, you can still plug it in to a router using the Gigabit Ethernet connection on the back. There are two HDMI ports available: one can be used to plug in a second monitor, while the other can be used to plug in home entertainment device, be it a Blu-ray player or even a Wi-Di adapter. There is also an S/PDIF output so you can tap in to a proper set of PC speakers or an amp.

Unlike many other desktop computers on the market, this one offers a digital TV tuner (with two tuners) by default. This means that the Aspire U can be used as a regular TV through the supplied AverMedia TV Player software. It's very primitive looking software though, and you'll most likely want to install something flashier, such as Windows Media Centre, which is available in the Windows 8.1 Pro pack. You'll also have to source your own remote control because Acer doesn't supply one in the box.

As for performance, the Intel Core i5-4200U CPU has a standard frequency of 2.5GHz, two cores, plus Hyper-Threading. Along with 8GB of DDR3 SDRAM, a 1TB, 5400rpm hard drive, and an NVIDIA GeForce GTX 760M graphics adapter, it supplies a zippy overall performance that allows office software and more to be run with ease — these are all notebook components, so the Aspire U basically performs as well as a typical 15.6in laptop with a fourth-gen mobile CPU and a hard drive, and it's not expandable like a typical desktop tower PC.

In Blender 3D, it completed our test render job in 39sec, while in HandBrake it turned a vob file into an MP4 in just 17min 6sec. This shows that there is enough grunt there to use this all-in-one as all-round system for creating media files (ripping CDs and DVDs), transcoding, and editing. Its storage isn't all that fast, though, which is understandable given it's a 5400rpm, 2.5in hard drive. In CrustalDiskMark, it recorded a read rate of 109 megabytes per second (MBps), and a write rate of 106MBps.

Graphics performance is better than average thanks to the NVIDIA GeForce GTX 760M adapter, which can provide decent frame rates for many RTS games, for example, though the native 1920x1080 resolution of the screen might push it and in-game settings might have to be adjusted to compensate. In the latest 3DMark, it recorded 51948 in the Ice Storm test, 8152 in the Cloud Gate test, and 2092 in the Fire Strike test, which is the most punishing of the tests. When the NVIDIA adapter isn't in use for gaming, the all-in-one uses the integrated Intel HD graphics to save on power consumption.

The screen's Full HD resolution is great for multitasking when you want to line windows up side by side, and it provided good responsiveness when we used touch gestures to access Charms and swipe through open apps. Typing on the screen using the on-screen keyboard was a novelty, but useful for searching for music, for example. Tapping on icons to play music and launch apps was intuitive, and the other use for the touchscreen was to swipe through photos and interact with games such as Cut the Rope. That's all we used it for.

It's a glossy screen, so you have to mindful of reflections and place the unit in a place where it will be affected as little as possible by light sources behind you, and you also have to remember to clean the screen regularly to get rid of greasy finger marks. There is a brightness control on the right side, but you don't get a physical volume control — you will have to use the Windows on-screen volume control or the keyboard. The speakers are merely adequate, so you will want to either tap into a Bluetooth stereo or speaker system, or use the line out/headphone port.

If you're in the market for a new family PC and like the idea of the touch interface, perhaps as a way to keep kids busy, then the Aspire U is worth a look. It's a decent all-round PC, especially if you want a touchscreen input, but it's a PC that could use refinement, both in the controls it offers around the screen, and also in the software that's installed.