Don't be put off by the Pentium; this laptop actually goes alright 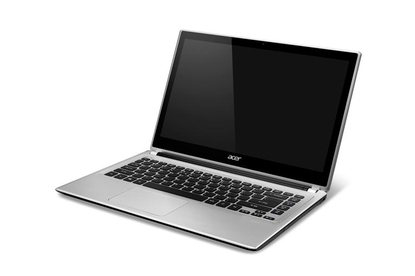 This is an inexpensive touchscreen laptop with decent speed and features. At 14in, it's not too big or heavy to carry around on a daily basis, and it's comfortable enough to use for long typing and Web browsing sessions. The touchscreen adds an extra bit of versatility to the unit, too. A good unit for the home or the classroom.

It's nice to see the Pentium brand still kicking around after all these years, and Acer has put it to good use in its Aspire V5 laptop, creating a touch-based, 14-in solution for under $700. It's zippy enough for everyday tasks, it stays cool under heavy workloads, and its battery life is decent, too.

The Acer Aspire V5-431P-997B4G50Mass (that really is the full name Acer has given this product on its site) has a complete configuration that makes it useful as a machine for home or school work. It comes with a built-in DVD burner, as well as three USB ports (one of which is USB 3.0), HDMI, a headset port, and an SD card slot. There is also a proprietary port for a dongle that can supply VGA output and Gigabit Ethernet. The weight is 2.2kg and, while it feels quite heavy, it is a relatively slim laptop.

The base is about 16mm thick on its own, but it tapers at the edges, and this is one of the reasons the Gigabit and VGA ports have been relegated to dongle status. Not only that, there really isn't that much room left on the edges when you take into consideration the other ports, the optical drive, the speakers (which should not be relied upon for high-quality listening) and the cooling vent. Indeed, it's a base that's chock full of gear already, while on the inside it also has Bluetooth and dual-band, 802.11n Wi-Fi (an Atheros AR5BWB222 module).

Despite being an inexpensive unit, it looks quite stylish and its build quality is not awful. The finish of the palm rest is smooth and the area is large, giving you plenty of space to rest your hands as you type. The touchpad is 97x66mm and it feels smooth. However, it's set to perform two-finger scroll gestures in the reverse direction by default, and we couldn't get it to scroll normally, despite disabling the reverse direction in the driver.

The performance of the pad overall was decent, but the cursor did jump off the spot occasionally during double-tap actions, and the Windows 8 swipe-in gestures were a little too sensitive. It's a very similar pad, in terms of how it behaved, to the pad on the Toshiba Satellite P840 — although that's meant to be a premium laptop.

We like the keyboard on this laptop and think it's very comfortable to use for long periods of typing. The chiclet styling leaves plenty of space between the keys and they are soft and responsive to hit. We like the space that's been left around the arrow keys, and also the slight gap between the Backspace and Enter keys, and the Page and Home keys on the far right column.

With a 14in screen, the V5 is more portable than the 15.6in models that are usually found at this price point, and it's also a 10-point touch-enabled screen. This means you can use both the touchpad or the screen to navigate the Windows 8 system. Being an inexpensive laptop though, the screen's quality isn't great: you have to put up with narrow viewing angles, lots of reflections, and also plenty of rippling along the edges when the screen is touched — don't be too rough with it when you touch it. Nevertheless, for basic tasks around the home or in a classroom, it will be fine.

A dual-core Pentium 997 with a frequency of 1.6GHz gives the Acer V5 its processing power. It's joined by 4GB of DDR3 SDRAM, a 500GB, 5400rpm hard drive, and integrated Intel HD graphics. As far as modern laptop configurations go, it's nothing special, but it's very good if you just want a simple machine for writing, emailing and browsing the Web. We also found it to be fine for Internet video streaming, and even for playing a few games from the Windows Store (using the keyboard, not the touchscreen, since this laptop can't be turned into a tablet).

You don't get quite as much power as an Intel Core-based laptop when it comes to multitasking, but in a straight line, the speed of the Pentium can hold its own. It recorded 1min 34sec in our Blender 3D rendering test, 1min 19sec in our iTunes MP3 encoding test, and it took 36min to convert a DVD file to an MP4 using Handbrake. These times are noticeably slower than what a typical Core i5-based laptop can get in the same tests — a 1.7GHz model will do the Blender and iTunes tests in 49sec and 60sec, respectively, and will take about 23min to do the Handbrake test.

Storage is handled by a 500GB hard drive, and it put up transfer rates that are decent considering the budget nature of this notebook. In CrystalDiskMark, it recorded 100 megabytes per second in both the read and the write tests. Graphics performance was also decent from the integrated Intel HD chip, which recorded 3158 in 3DMark06. You can use this notebook to play many basic games obtained through the Windows Store.

Battery life on this laptop is decent considering its 14in size. In our rundown test, in which we disable power management, enable Wi-Fi, maximise screen brightness and loop an Xvid-encoded video, it lasted 3hr 21min. That's not far off the average for 13.3in Ultrabooks, for example, which last about 3hr 30min in this same test. If you lower the brightness and use the laptop for basic Web browsing (that is, not browsing Flash-heavy pages) and typing tasks, it could last up to five hours before needing its power adapter.

We were a little concerned when we looked at the specs and saw the Pentium CPU topping the list, but we ended up enjoying this Acer Aspire V5 model a lot. Its performance turned out to be decent (even for viewing Flash-heavy Web sites and Internet video streams) and it also ran at a cool temperature throughout our test period. Even when it had been processing Flash video for hours from NBA.TV, with CPU usage at 30 per cent, the base did not get warm.

This performance, along with the good array of connectivity and overall user comfort make the V5 a laptop worth considering, particularly if you want something smaller than a 15-incher, but with a similar feature-set. Its touchscreen also adds some extra versatility. We only had issues with its touchpad (it's far from terrible, but could still be better) and also with the quality of the screen, but we expected that at this price point.