Take a low-power, silent desktop PC, and stuff it with netbook components, and you get the Acer AspireRevo R3610 nettop 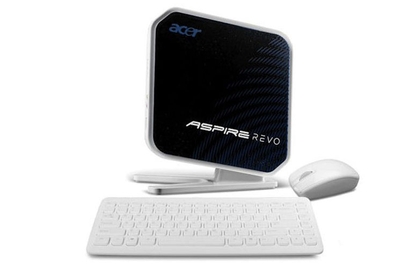 The Acer AspireRevo R3610 is a small nettop capable of high-definition video playback.

Nettops provide a fraction of a traditional desktop's power at a fraction of the size and cost. While they're generally serviceable for basic browsing and email tasks, the Acer AspireRevo R3610's nVidia Ion graphics also give it media-centre potential - as does its compact 30x180x180mm size.

We've sung the praises of nVidia's Ion platform before, and the GPU-maker's integrated graphics product turns the Acer AspireRevo R3610 into a real contender. Gaming still isn't an option - the system produced just 12 frames per second in our Unreal Tournament 3 tests (at 1024 by 768, and highest settings).

But when it comes to HD video output, Ion trumps typical integrated graphics from Intel right now. The Acer AspireRevo R3610 sports VGA and HDMI ports, and streams music, photos, and 1080p video with aplomb. Compare that with the similarly equipped Sony VAIO P netbook, which struggles to handle even 320-by-240-resolution video on its Intel GMA 550 graphics processor.

Streaming HD web video from sites such as Hulu or Vimeo was shaky on the Acer AspireRevo R3610 until we installed the new Flash Player 10.1 Beta, which beefs up Flash playback by enlisting the help of the Ion graphics chip. The AspireRevo's support for 7.1 surround sound (via S/PDIF coaxial output), 802.11n Wi-Fi, and gigabit ethernet round out its home-theatre PC capabilities. The system's Windows 7 Home Premium OS includes Media Center, but you'll need to get your own USB TV tuner or capture stick for DVR-like functionality.