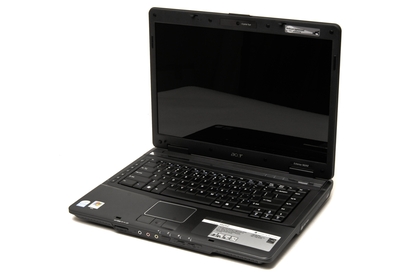 Although the unit lacks the speed seen in other dual-core systems, it is one of the best notebooks available for under $1000. If you are on a tight budget, this unit should be high on the must-see list.

The Acer Extensa 5620Z (3A1G12Mi) is a budget notebook aimed squarely at the business market. With a combination of commercial features, such as an excellent built-in webcam, and a very low price tag — only $800 after a $99 cash back offer from Acer — the only real negative point for this unit is its lack of processing power.

The notebook is powered by an Intel Pentium Dual Core T2370 CPU, which runs at 1.73GHz and has a 1MB L2 cache. Considering the price, the dual-core CPU is a welcome surprise. Equipped with 1GB of 667MHz DDR2 RAM, a 120GB Serial ATA disk drive that runs at 5400rpm, a DVD-RW with dual-layer burning capabilities, and a 15.4in screen with a native resolution of 1280x800, the internal workings of the unit are all very positive on paper, especially when balanced against the low price point. Although some users may find the workspace a bit cramped while running multiple applications with the native resolution of the screen, good desktop management will avoid this, and DVD watching will be fine. The 1GB of RAM may seem low, but this can be upgraded to 2GB in the future.

The Extensa was slow in performing our WorldBench 6 tests, where the unit only scored a 56. Although you'll be able to multitask with typical office applications without encountering too much sluggishness, applications that require more power, such as video-editing, won't run well at all on this notebook. In our iTunes test, where we convert 53 minutes worth of .WAV files into 192Kbps MP3s to test the CPU, the dual-core system shone with a good time of 1min 46sec.

The 3DMark06 benchmarks returned a low score of 299, but this is to be expected from a system with an integrated Intel X3100 graphics card and a 1.73GHz CPU. Anyone looking for good gaming performance in a notebook will, naturally, need to look at spending much more than $800!

The 15.4in screen exhibited excellent colour reproduction when viewing movies and still images, although reflectivity is a problem. Viewing angles aren't spectacular, but using the unit in smaller spaces such as an aircraft seat shouldn't be a problem. The built-in webcam above the screen is relatively good, capturing motion in a variety of lighting situations.

A general quirk that we've noticed with many of Acer's notebooks is the 'ergonomic' keyboard. Instead of a straight-edged keyboard, Acer has chosen a curved design. New Acer users, especially touch-typists, may need time to adjust because the keys are in slightly different places due to the curve.

Cosmetically speaking, the Extensa is very business-like, so it won't turn heads. The screen and body are both sturdy, and should stand up to the pressures of constant use without many problems. Business users and travellers will also appreciate the Extensa's battery performance. In our worst-case scenario test, where we push the battery by running the optical drive, sound, screen and processor until the power runs outs, the Extensa lasted 1 hour and 44 minutes, which a good result. If a user sticks to less intensive applications and uses effective power management, however, the notebook will last much longer.

Without including the power supply unit (PSU), this unit weighs in at 2.75kg and it's generally bearable for use on laps. When carrying it around in your laptop bag, the whole package with the PSU weighs 3.15kg.

Given the low price tag, the unit has many connections. Although the wireless adapter only supports 802.11b/g networking, the gigabit Ethernet connection will facilitate fast transfer rates over a wired network. A 56Kbps modem port on the rear of the unit means that Internet connectivity is well-covered for all types of users.

The inclusion pf four USB 2.0 ports, as well as one FireWire port, S-Video out port and a VGA port are all welcome additions to this budget device, as is the variety of card slots. Apart from the 5-in-1 card reader, (SD, MMC, MS, MS Pro, xD), an ExpressCard/54 slot sits below a Type II PC Card slot, and the inclusion of both provides for a great range of expansion cards to be installed, such as e-SATA or 3G data cards for fast external storage and mobile Internet access, respectively.