The Acer Iconia Tab A510 is an adequate tablet, but it does little to push ahead of the pack The Acer Iconia Tab A510 has excellent battery life, reasonable ergonomics and offers solid performance with only some minor software hiccups. This is a good tablet on the whole but simply being "good" isn't good enough at this price point. The Iconia Tab A510's bland design and average screen means it does little to stand out from the pack, though the excellent battery life is a plus.

The Acer Iconia Tab A510's bland design won't turn any heads but its impressive battery life and solid performance makes it a viable, if overpriced Android tablet. The Iconia Tab A510 is best described as adequate, but it does little to push ahead of many alternatives in a crowded market.

The Acer Iconia Tab 510 is never going to win an award for looks. Its styling differs little from previous Acer tablets, particularly the Iconia Tab A200. While that isn't necessarily a bad thing, the A200 retails for just $349, significantly less than the A510. Weighing a hefty 680g and measuring 10.2mm thick, the A510 does little to grab your attention. In fact, it initially seems very easy to overlook for thinner, lighter and more attractive alternatives.

The Acer Iconia Tab A510 at least has reasonably impressive ergonomics. It feels lighter than it really is and the smooth, rounded corners make it comfortable to hold in both portrait or landscape orientations. We appreciated a few of Acer's less advertised design touches, particularly the smooth back made grippy thanks to etched dots all over the surface. However, the Olympic ring logo next to the Acer logo is both unnecessary and will quickly date the tablet once the 2012 London games are over.

A couple of small but nifty touches, such as the tiny LED indicator on the power button and the raised indents on the volume buttons add to the overall user experience. Two well placed speakers, neatly positioned power and volume buttons and a mini-HDMI port are also appreciated, though the orientation lock slider on the top requires way too much force to activate. The microSD card slot and a reset button on the left are hidden by an annoying plastic flap that is difficult to remove. 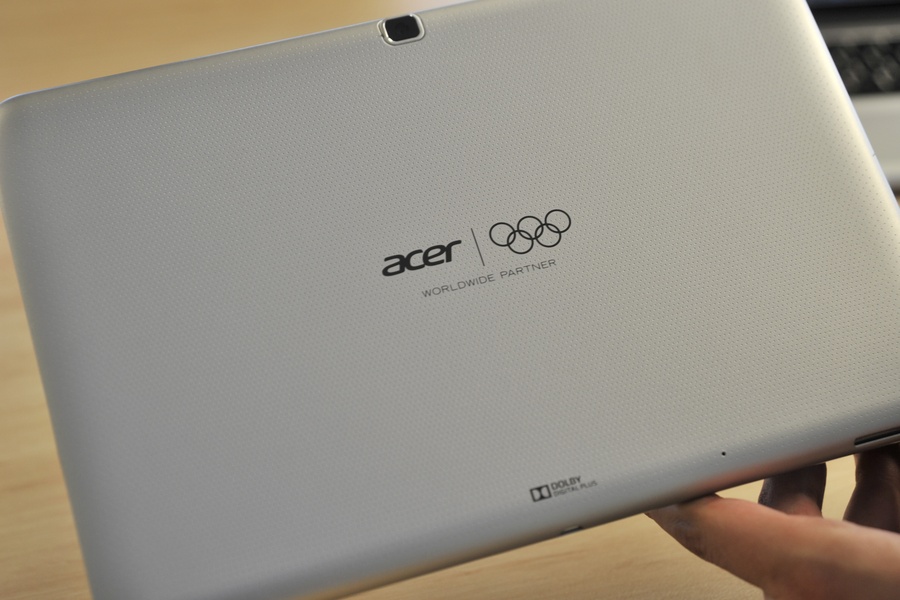 Arguably the least impressive aspect of the Acer Iconia Tab A510 is its display. It's not a bad screen by any means but it lacks the brightness and vivid colour of many other Android tablets on the market, such as the ASUS Eee Pad Transformer Prime. The glossy panel is tough to see in direct sunlight and text clarity isn't the best, though vertical viewing angles are reasonably impressive. 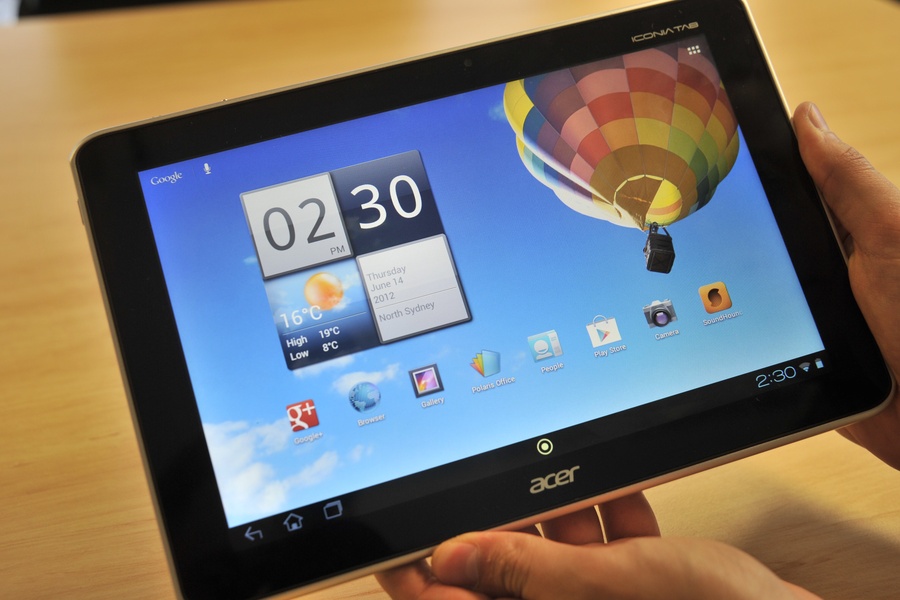 The Iconia Tab A510's screen is tough to see in direct sunlight.

The Acer Iconia Tab A510 runs a largely vanilla version of the Ice Cream Sandwich Android OS. The user experience is almost entirely void of any software customisation by Acer, aside from a shortcut suite the company calls the "ring interface". Tapping the ring button in the middle of the status bar brings up a quick menu with three customisable shortcuts, a volume control bar and a rotating, 3D carousel of your browser bookmarks. The ring interface is handy, but it can be a little slow to open at times. Annoyingly, the browser shortcut can only display bookmarks saved on the device itself, not those synced through your Google account. We also love the shortcuts on the lock screen — you can drag the lock icon to the left into four customisable shortcuts to directly unlock into that particular app.

The Acer Iconia Tab A510 comes with some extra apps over what Google provides by default. These include the Acer Print app, Astro File Manager, Aupeo personal radio, Acer's clear.Fi media suite — which streams music and videos to a DLNA-enabled TV — the LumiRead eBook store, a Media Server sharing app and McAfee's VirusScan Mobile software. None of them add much to the overall package, though the print app is a nice inclusion and was easy to set up with our Wi-Fi enabled printer. 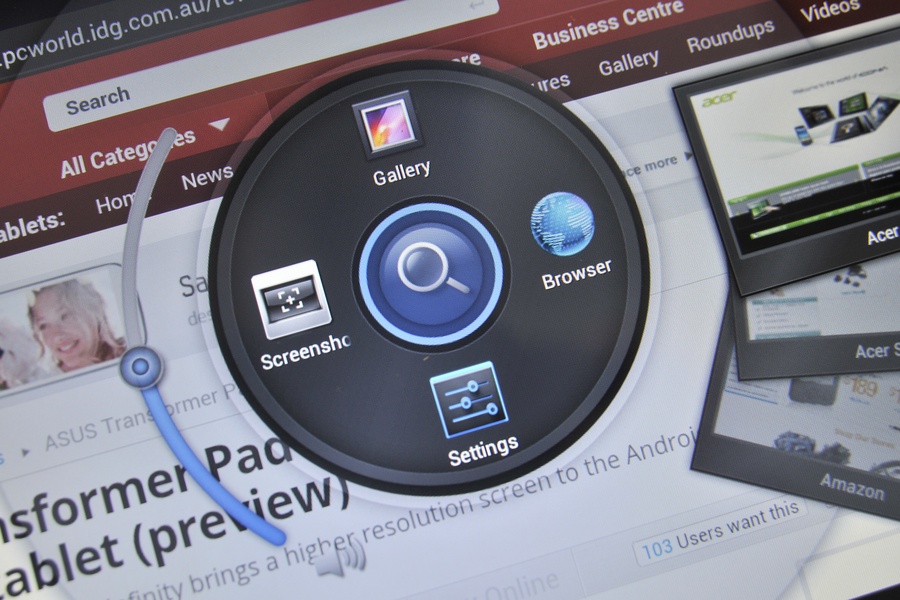 Acer's "ring interface" is a welcome inclusion, though it can be a little slow.

Performance on the whole is excellent, with only occasional hiccups when using the default browser apparent. Applications open and closed swiftly with little delay, home screens scroll smoothly even when multiple widgets are in use and the Iconia Tab A510 handles gaming, particularly graphic intensive titles like FLCommando and GTA III, with relative ease. All in all, the Acer Iconia Tab A510 performs just as you would expect given it has a powerful 1.3GHz quad-core Tegra 3 processor, though the slow start up time is a slight annoyance and the tablet does tend to heat up while playing games. This is particularly evident on the back, towards the right corner of the device.

The Iconia Tab A510 itself may perform well but the Android platform that powers it still has some issues. We've mentioned the browser, which automatically switches to mobile versions of many Web sites and can often be slow to zoom into pages, but third-party apps remain a big problem. There are minimal apps that have been designed with a tablet in mind, so most of them simply expand to fit the larger display of the Iconia Tab A510. There is also no easy way to quickly determine if an app in the Android Market is designed to work on a tablet. A good example is the Spotify app, which ridiculously only works in portrait mode because it was designed to be used on a smartphone and not a tablet. 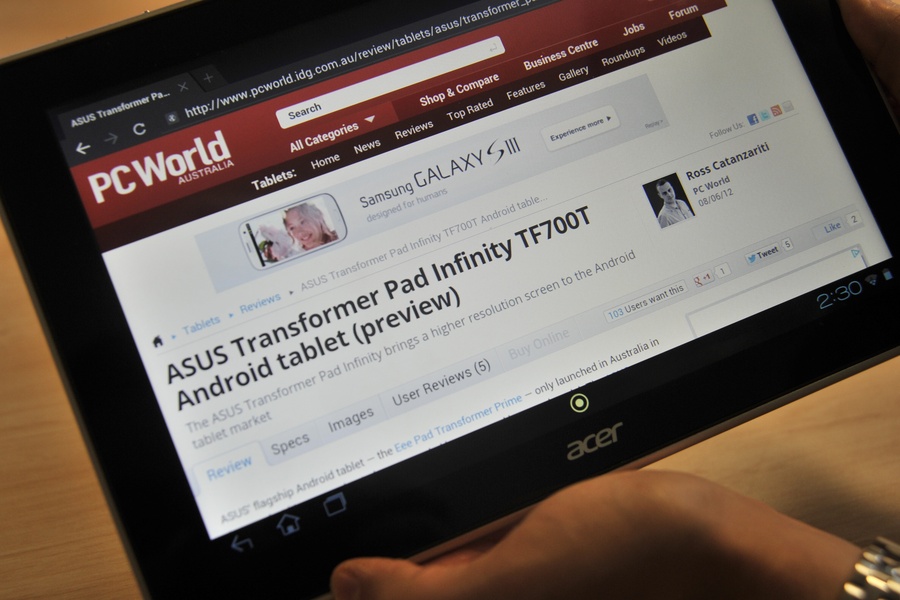 The browser can be a little slow to zoom into Web pages.

Acer claims the Iconia Tab A510's huge 9800mAh battery provides up to 15 hours of standby time. We experienced less than that in real world use, but the nine and a half hours of battery life we managed means the Iconia Tab A510 is on par with the excellent iPad when it comes to power efficiency.

The Acer Iconia Tab A510 has 32GB of internal memory but the microSD card slot means you can expand that significantly. Acer uses a regular micro-USB port for charging and synchronising, but the AC adapter included only fits the Iconia Tab A510 due to its slightly larger than normal size. 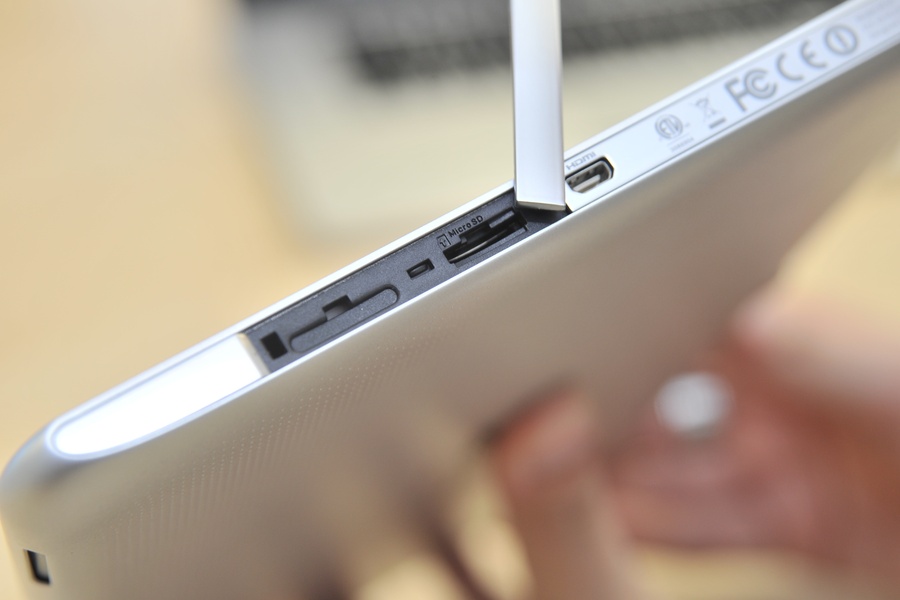 The Iconia Tab A510's two built-in speakers may be well positioned but they produce very poor quality sound. The speakers sit on the angled, bottom edge of the tablet so sound isn't muffled when the device is sitting on a desk or table. However, the volume is low even at its highest setting, sound distorts at high levels and bass is almost non-existent.

The Iconia Tab A510's dual-camera's are also barely worth mentioning. The rear-facing 5-megapixel camera produces shots lacking in detail, while the front-facing camera works well enough to provide passable video for third-party apps like Skype and Tango but little more.

The Acer Iconia Tab A510 is available now through retailers JB Hi-Fi, The Good Guys and Radio Rentals (South Australia only) for $549.