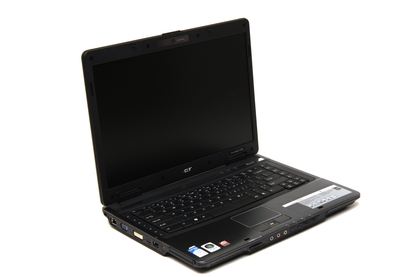 There's little or nothing to complain about with this notebook. It's got power, long battery life and plenty of functionality.

The Acer TravelMate 5720G is one of Acer's new Centrino-based (Santa Rosa) notebooks. It's affordable, well-built and has plenty of speed and storage capacity. In performance and battery tests the TravelMate 5720G performed very well, and its sturdy, graphite-style design will appeal to business users after a notebook without too much flare, but with plenty of guts to tackle office applications, multitasking and more. It's installed with Windows Vista Business edition, and it also includes plenty of connectivity that will appeal to business users who are always on the move.

As well as offering Intel's latest Centrino platform, including a Core 2 Duo T7300 2.0GHz CPU with an 800MHz front side bus (FSB) and 802.11a/b/g and draft-n wireless networking, this unit also has one of ATI's latest notebook graphics chips, the ATI Mobility Radeon X2500. It comes packed with 2GB of DDR2 RAM, which is more than enough to handle the average swath of business applications and more. The screen has a native resolution of 1280x800 and it offers a reasonably bright image with good contrast and a decent viewing angle.

The TravelMate series of business notebooks includes a built-in webcam for video conferencing, a feature that's becoming more popular in business notebook designs. A biometric fingerprint reader has also been installed for greater data security. If data protection is an issue, Acer's empowering technology software, which is pre-installed, has a few nifty features. One feature, called eLock Management, allows you to lock the hard drive, optical drive or floppy drive when the machine is unattended. The software also covers data encryption for storage and transmission, and it can be easily accessed from the desktop. Other features of the software include data backup and recovery, and profile managers.

The latest Centrino notebook platform has proven itself to be a good performer. In our tests, the TravelMate 5720G was no exception to this, scoring a total of 79 in our WorldBench 6 benchmark. This indicates that it's more than capable of handling programs like Adobe Photoshop, Microsoft Office and it will capably perform other taxing tasks such as video encoding. In our MP3 encoding test, where we encode 53 minutes of WAV files to 192Kbps MP3 files, the system took just 131 seconds, which was an expected results.

The battery tests showed equally impressive results. To test the battery we use a worst-case environment buy looping a DVD movie. This employs the speakers and the optical drive, as well as the screen and other core components in order to completely drain the battery. In this test the system lasted 155 minutes, which considerably longer than most notebooks we've tested recently.

The keyboard has an ergonomic curve (like a smiling face), which is meant to follow the natural curve of the wrist when typing. Those used to a normal keyboard design may find it a little difficult to get used to it, and it may be worth trying before buying. On the left side of the keyboard are a set of hotkey shortcut buttons. These give you quick access to mail, the Web and some of Acer's empowering technology software features.

Although this notebook isn't primarily designed for entertainment, its ATI graphics chip will allow you to play some fairly basic 3-D games, as was suggested by a score of 14725 in 3DMark 2001 SE. But, a score of 2049 in 3DMark06 suggests newer games, even basic titles, will struggle to run smoothly. The speakers lack any real depth of sound, but have enough volume so that a movie can be enjoyed when there's no better option.

For storage, a 200GB hard drive is installed, as is a DVD re-writer. Connectivity is abundant; it offers VGA, S-Video and DVI outputs for TVs, monitors and projectors, a PC card and an Express Card slot, a mini FireWire port and a total of four USB 2.0 ports. A gigabit Ethernet port is also installed, along with a 56Kbps modem and the aforementioned wireless connection. The system also has a media card reader, which supports xD, MMC, SD, MS and MS-Pro cards.