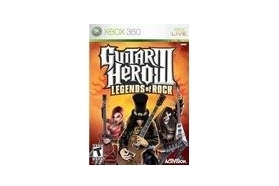 Whether you buy Guitar Hero 3 will depend on whether you already invested in Guitar Hero 2 for the Xbox 360. If you did, this is a no-brainer. Go buy GH3 the minute it hits store shelves -- you will not be disappointed. However, if you haven't yet taken the plunge, you might want to wait until Rock Band comes out to see before you make your decision. Either way, this is the best Guitar Hero ever made and you will not be disappointed if you're a fan of the franchise.

It's hard being the king. Just ask the Guitar Hero franchise. It's currently sitting on the rhythm game throne and yet, all anyone can talk about is the new kid on the block, Rock Band.

But don't let the hype distract you: Guitar Hero 3 is not only the best Guitar Hero ever, it might have just enough juice to steal away some of Rock Band's thunder.

There really isn't much to say about Guitar Hero 3. The game is essentially the same one that we've been playing ever since the first one dropped. The only difference this time around is that presentation and visuals have finally caught up to our expectations. In short, the game looks as good as it plays, which is a remarkable feat indeed. The graphics get a nice bump up in quality and the animated cut-scenes that transition you from level to level are nicely done -- say goodbye to the static map with a cutout tour van.

Everything just screams high production values, which is pretty awesome. The song list is also impressive and features a good mix of the old and the new. It still skews heavily towards rock and hair metal but the game has some real winners like Guns N' Roses' Welcome To The Jungle and Weezer's My Name is Jonas. There are also a ton of unlockable tracks and of course downloadable content is in the works.

The new additions also shine but not for very long. The boss battles are a fun diversion and we wish there had been more of them -- there are only three of them so it doesn't feel like a full fledged feature. The online modes, which we didn't get to test out due to the fact that we were playing an early review copy, have some cool options, including online co-op, which is useful if you don't have a friend to play with you.

We did have a few issues with the game, though. We noticed that the layout of the notes in certain songs were a little wonky, requiring you to move your fingers in a way that felt unnatural. The game is also pretty brutal in the late goings. We got all the way to the last tier on Hard without failing once but we still haven't beaten any of the final songs because they're so insanely difficult.

Also, the included wireless guitar is awesome but we had minor issues with getting it to sync with the console. The green button would also blink out every now and again. It might be an isolated issue but it was a small ding against an otherwise awesome controller.