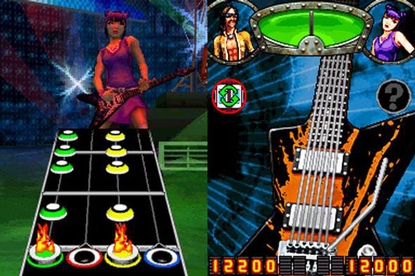 Guitar Hero: Modern Hits never really justifies itself as an upgrade from the stellar Guitar Hero On Tour: Decades. Still, any on-the-go rock star is bound to have a blast with the ageless GH gameplay, not to mention the return of plenty of classic characters and brand new venues.

Only twelve months into the portable franchise's lifespan, the gaming community has already been treated to three Guitar Hero On Tour titles. While the first On Tour was a daring experiment, On Tour: Decades only improved upon that formula by introducing new instruments and a killer setlist. While the series latest installation is classic Guitar Hero fun, a weak setlist and lack of innovation hampers the experience as a whole.

One of the most intriguing aspects of the Guitar Hero franchise has always been the series' universal appeal. From classic oldies to contemporary favorites, Guitar Hero became a household name by offering something to every audience. That being said, it always makes me weary when the tried-and-true formula is applied to a specific time period or genre, such as the oft-criticised Guitar Hero Encore: Rock the 80s. It doesn't take much for a game to jump the shark from toting itself as a brand new experience to suddenly acting as an over-priced expansion pack. While Modern Hits doesn't quite fit into either of those extremes, it doesn't bring enough new to the table to really stand on its own two feet.

With 28 tracks featuring current favourites from Wolfmother to the Kaiser Chiefs, Modern Hits celebrates just that: plenty of noteworthy songs from the past few years. Now, the general Guitar Hero formula hasn't changed since its On Tour debut, but Modern Hits does bring plenty of new features to the table. One of the most notable additions is the inclusion of Fan Requests: fun little challenges with unique victory requirements (complete a song without any note bombs, etc.) that are vital in progressing through Career Mode. Setlist connectivity has returned from Decades, allowing you to sync your DS up with previous On Tour iterations so you can jam to their respective tracks.