On the run with Adidas' miCoach Pacer 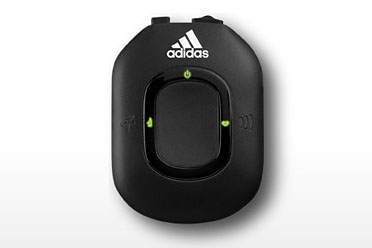 The best aspect of the miCoach Pacer is the data that it collects, including your time, heart rate, pace and distance which it presents to you as a summary and a detailed overview of your most recent workout, as well as details of previous workouts. The price and complexity of the device may put it out of reach for some, but it should appeal to people who enjoy running and like data. Adidas may need to rethink its miCoach Manager software and improve the stability of its Web site. If they do, they could very well have a winner on their hands.

For the last couple of weeks, I've been running with a new gadget: Adidas' miCoach Pacer, a set of three small devices that combine audio coaching with a stride sensor and a heart-rate monitor. There's a lot to like about the miCoach Pacer, but a buggy Web site and the lack of native application support undermine what otherwise could be a very useful tool.

Adidas describes the $250 miCoach Pacer, which was unveiled at CES during January, as an "interactive personal coaching and training system" that uses your heart rate to guide you through workouts.

It offers runners a range of training programs, from its basic Learn to Run plans to a program designed to improve your marathon time. Each training program consists of workouts that include running intervals and recovery days, with the system keeping runners within heart rate "zones" that reflect how hard they are working. Run too fast, and the system will tell you to slow down. If you're going too slow, the miCoach tells you to pick up the pace.

Getting started requires setting up an account on Adidas' miCoach Web site. This is where you configure the miCoach Pacer voice (you can choose a man's voice or a woman, as well as select from a list of different languages) and pick a training plan. If you don't see a plan that matches your needs, you can create your own.

Once you've selected the workout you want, the Web site creates a workout schedule for you, and offers the ability to set e-mail reminders for each upcoming workout. Your workout plan is then synchronized with the miCoach Pacer module using a Java application, called miCoach Manager, downloaded from the Web site.

I installed the application on my Macbook Pro (I didn't test it on my work laptop, which runs Windows XP) and it generally worked as it was supposed to, apart from a few times when it didn't recognize that the control module was ready to be synched. But given the competition that Adidas faces, it needs to do more to improve the user experience with miCoach Manager

The main advantages of miCoach Pacer include the ability to replace the stride sensor's battery instead of having to buy a new sensor each time the battery dies, as you do with the Nike+iPod sensor. The miCoach Pacer also measures your heart rate, something Nike+iPod doesn't do. However, Nike+iPod is a much simpler system than the miCoach Pacer, allowing users to sync workout information with Nike's Web site through iTunes.

The Java version of miCoach Manager doesn't match this ease of use, whereas a native MacOS application could do better.

When you're ready for your first run with the miCoach Pacer, you clip the stride sensor to the laces of your running shoe (or place it inside the special compartment provided in some Adidas shoes) and strap the heart-rate monitor across your chest, just below the sternum. I liked the stride sensor's clip -- it was very easy to put on and seemed rock solid. I never worried about losing it while running.

Things can get a bit tricky with the miCoach Pacer control module. This is the device that collects data from the two sensors and gives the audio cues that coach you through the workout. If you don't run with an MP3 player, you just need to clip the module to an armband and plug in a pair of headphones, such as the one-ear headset provided, and you're ready to go.

Setting up the miCoach Pacer requires you to connect a short audio pass-through cable that links the headphone jack on your MP3 player with the audio-in port on the control module, and then plug your headphones into the audio-out jack on the control module to hear audio cues over your music. This may sound complicated, but anybody who's willing to strap on a heart-rate monitor for a run shouldn't find it excessive.

The first workout is a 12-minute assessment that runs you through a series of running intervals, each one progressively faster than the one before, to calibrate your level of fitness with four heart-rate zones: blue (easy), green, yellow and red (your maximum effort). Once you've done that, you're ready to start your chosen training program.

This is where the miCoach Pacer starts to shine. I liked the audio cues that lead you through the intervals in each workout, even though the system mysteriously took several workouts to adjust to the voice settings that I chose. Having the voice tell me when to speed up and slow down saved me the hassle of keeping tabs on my watch, allowing me to concentrate on my pace or otherwise just enjoy my run.

Alternatively, you can set the device to "Free" mode, which collects data while you run without any audio cues.

The best aspect of the miCoach Pacer is the data that it collects, including your time, heart rate, pace and distance. This information is downloaded from the control module and synched with the miCoach Web site, where you get both a summary and a detailed overview of your most recent workout, as well as details of previous workouts.

The Web site itself is clean and well presented, offering the ability to share workout data with your friends over Facebook. But I've also found it buggy, with occasional Flash errors and login problems that rendered my data inaccessible for short periods of time. On the bright side, Adidas appears to be making improvements to the site, rolling out a revamped version this week with a modified user interface and new features, including a discussion forum and the ability to map out running routes.

It's too early to say what effect the miCoach Pacer will have on my overall fitness level but I've enjoyed running with it, despite its flaws. The price and complexity of the device means it's not for everyone, but it should appeal to people who enjoy running and like data -- or anyone who wants to make running on a treadmill more interesting.

I just hope that Adidas will rethink its miCoach Manager software and improve the stability of its Web site. If they do, they could very well have a winner on their hands.