Simple and easy to use. 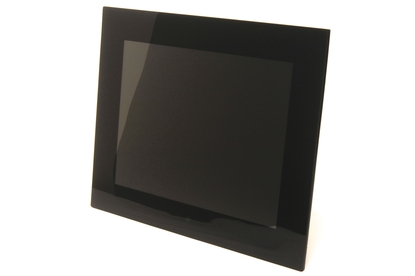 Though there are downsides to this photo frame, AKAI's 15in model still delivers a good quality display and a responsive interface. It is simple, but that is all you need in a photo frame.

AKAI’s 15in Digital Photo Frame is certainly at the larger end of the scale, and it has some good qualities aside from its size. Though it isn't a very advanced frame in terms of features, its simplicity and quality make it an excellent buy.

The 15in display has a 4.8cm black plastic border. As with most photo frames, a gloss finish is applied to both the display and frame. Though normally a pet peeve of ours, it is well executed here, with no evidence of the image’s colour washing out as a result. There is a slight mirror effect, however, which was particularly noticeable during testing in a brightly lit room; viewing the frame from a distance reduces this effect significantly.

The only other gripe we have with the frame’s design is the placement of its ports and buttons. They are placed on opposite sides of the frame's back, and key ports, like the card reader and USB port, are difficult to reach without moving the frame.

Connectivity is fairly comprehensive, with a mini-USB port for PC connection and a host USB port for direct connection to USB flash drives. The card reader supports CompactFlash, SD, xD, MemoryStick and, surprisingly, MMC, a format which has lost favour with manufacturers in recent months. Disappointingly, there is no internal storage — something which has only been doled out in frugal amounts by competitors in any case — leaving all storage to external media.

Format support is adequate, with JPEG picture support, MP3 audio support, and support for MPEG1, MPEG2 and MPEG4 videos. Though Akai doesn’t officially support it, we were able to run XviD-encoded AVI files as well. There isn't any Bluetooth or Wi-Fi connectivity.

As with most photo frames the user interface is quite primitive, but its colour scheme and graphics are a refreshing departure. It is fast as well, with remote commands, user interaction and media card recognition all very responsive.

There are basic set up and calendar functions. While we didn’t expect anything too extravagant, the calendar function could do with some improvement — at least to the point that users can add events and reminders, rather than simply viewing the date.

There are standard options including slideshow settings and time and date. The frame also offers an image correction function, though this makes the transition between photos much slower.

The frame’s display is adequate, not spectacular. Horizontal viewing angles are good, with no washing out at 90 degrees either side. However, viewing the frame at different vertical angles can affect the picture quality. Otherwise, colours are quite accurate and vivid, with no evidence of the ghosting or poor gradation often found on poorer quality displays.

The quality of audio and video is mixed. Audio quality is decent, though there is no sign of low mid-range or bass frequencies. The audio can be played in combination with a photo slideshow. Video quality is decent, though we experienced bouts of choppiness on AVI files and audio on a QuickTime file quickly became out of sync. It won’t replace your TV, but the photo frame will do an adequate job.