Putting lots of power into a small PC case isn't easy, but Alienware has packed the X51 with enough grunt to run the latest games at high resolution and detail levels. Like most Alienware systems, its lighting system is customisable through software and its case is interesting to look at. Go for it if you're a gamer who's been hanging out for a small, yet powerful pre-built desktop PC.

The Alienware X51 is a slim tower PC that flies under the radar compared to most gaming PCs on the market — including Alienware's own Aurora machines. It's designed to appeal to users who want something simple and effective, and for users who don't really want to upgrade or expand their system. Pricing for the X51 starts at $1299 for a configuration that includes an Intel Core i5-2320 CPU and an NVIDIA GeForce GTX 555 graphics adapter, and goes up to $1699 for the configuration we are reviewing here. That's without a monitor.

Generally, when a machine is as small as the Alienware X51 (it's around 350mm tall, 100mm thick and 320mm deep) it's usually a business machine that doesn't have a lot of graphics grunt. However, Alienware has made sure that this machine can play the latest games on the market, many of them in Full HD and with high image detail enabled. It's not the fastest system that's available, but it's no slouch either and we think that any gamer who doesn't want an expensive gaming notebook or a bulky, space-hogging desktop PC, will appreciate it. It's also more convenient to take to a LAN party than a regular mid-sized desktop.

The Intel Core i5-2320 CPU is joined by 8GB of DDR3 SDRAM, a 1TB, 7200rpm hard drive, and an OEM-only NVIDIA GeForce GTX 555 graphics adapter. In our Blender 3D rendering test, the machine recorded a highly respectable time of 17sec; in our iTunes MP3 encoding test it recorded 43sec, which was an expected time. There is no question it's a fast machine that's suitable for everyday tasks, as well as hefty multi-tasking and even for tougher jobs such as video editing and rendering. Its hard drive also proved to be very zippy, notching up a read rate of 120 megabytes per second (MBps) in CrystalDiskMark, along with a write rate of 117MBps. In our own file copy tests, it averaged 57.55MBps, which is a fine result.

For gaming, the GeForce GTX 555 adapter represents the entry point for high-end GTX-based adapters and it's not an adapter you can go out and buy in the stores; it's an OEM-only adapter that has lower memory bandwidth than the GeForce GTX 550 Ti adapter, but more CUDA cores and a slightly higher texture fill rate. It put up a respectable score of 21846 in 3DMark06 and also proved that it can handle recent games with lot of their eye-candy enabled. Battlefield 3 ran with a 31 frames per second (fps) average at a resolution of 1920x1200 and with high image detail enabled. F.E.A.R 2 ran at 60fps at 1920x1200 and with high image detail enabled.

Indeed, the X51 is one of the smallest desktop PCs you can buy that also contains a potent configuration for gaming. If you're a do-it-yourself type, you will be able to build a machine with similar grunt for less money. The main configuration (with a GeForce GTX 550 Ti) would rack up a bill of around $750 if you were to procure the parts yourself. Then you'd have to pony up some cash for a decent motherboard, case and power supply, not to mention a Blu-ray/DVD burner and perhaps a new set of input peripherals, and a copy of Windows 7 Home Premium.

All that could bring the do-it-yourself total to around $1200-$1300 depending on the motherboard and case you choose. The chances are you might not be able to find a case as trim and as interesting to look at as the Alienware's though. And then you have to factor in the time to build it and install all the software. Basically, if you're a do-it-yourself person, you could build something as good (or better) than this PC in your own time. If you don't want the hassle of figuring out a configuration, sourcing all the parts and putting it together yourself, then the X51 is worth it.

Be aware though that this PC isn't one that can be easily upgraded. The components are tightly packed in the case and there is no space for any internal expansion. If you want to add a new drive, for example, you'll have to go for network attached storage or USB drives. There are six USB ports on the rear (two of them are USB 3.0) and another two on the front of the case. The front also has microphone and headphone ports, while there are more audio ports at the back (both analogue and digital), in addition to Gigabit Ethernet, HDMI and DVI ports. 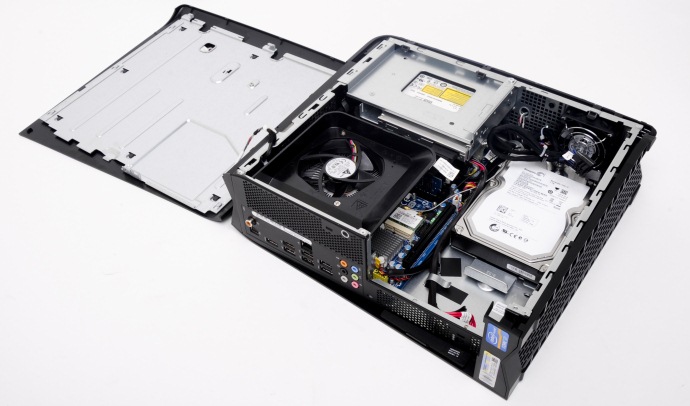 The X51 without its side panel and graphics adapter.

If you must open up the X51, you can do so by removing one screw and sliding the side panel off. It will expose the CPU and memory, but the hard drive will be hidden under the double-thickness graphics adapter, which is installed in a riser card and placed parallel to the micro motherboard. You will need to remove the graphics riser to get to the hard drive and it can be a little tricky. 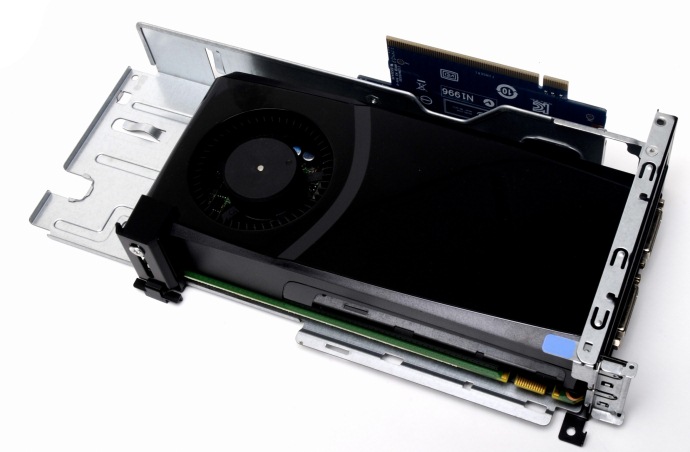 The graphics adapter on its riser card.

A fan is present at the front of the system, which sucks air from the front vent and pushes it over the hard drive towards the rear of the case. Along with the CPU and graphics adapter fans, the X51 emits some noise, but it's not overly loud. The power supply is external and this is a design choice that has allowed Alienware to make this machine so small, yet powerful. It is a big power adapter though (200x100mm) and it makes the system a little messy overall. 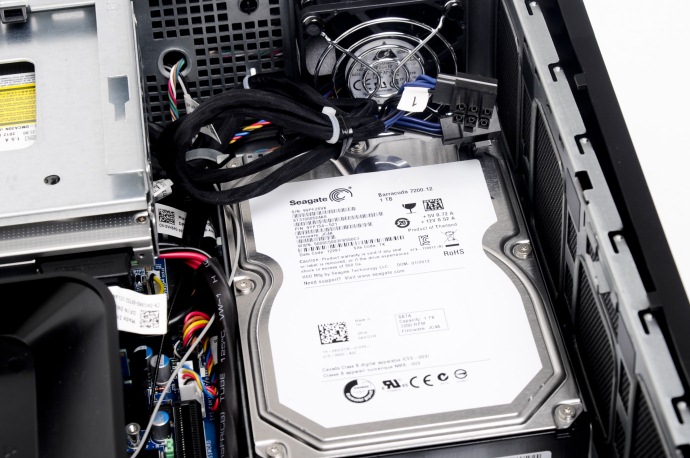 The hard drive and fan at the front of the system.

The vertical orientation of the case means that the slot-loading optical drive will spit out your discs with no support and you'll have to pick them up off the floor — that is, if you still use discs. A tray-based Blu-ray combo drive would be a little more careful with your discs. As it stands, the disrespect this system shows towards discs will probably further your desire to move away from optical media towards downloads and hard drive-based content.

Like other Alienware systems, the X51 has a comprehensive lighting system that works in conjunction with the Alien FX program. It allows you to choose from a wide range of colours for the two side panel lights, as well as the power button light and Alienware logo on the front. 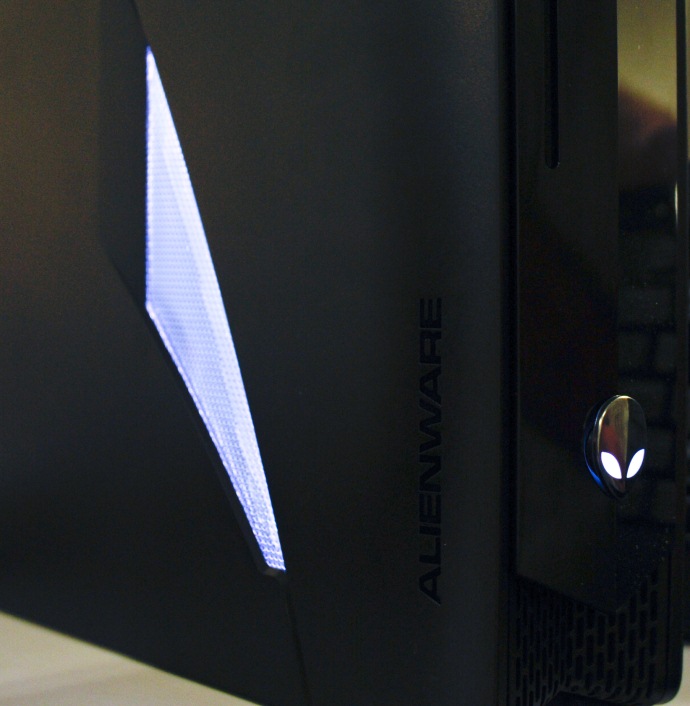 The side panel and alien head lights.

The biggest selling point of this system is its small size, which houses enough graphics grunt to tackle the latest games at high-definition resolutions. It's not an upgradeable system, but then again, not many small systems are. You get ample power for everyday applications and multitasking and more than a handful of USB ports for external storage and other devices.

We like the design of the system and the custom lighting schemes that can be implemented; the input peripherals that are supplied are comfortable to use, too. We don't like the slot-loading Blu-ray combo drive though, which has no means of holding discs when they are ejected, and we think the power adapter is too cumbersome, but we can appreciate that it has been left outside the case so that the system footprint can be smaller overall. In a nutshell, if you're not a do-it-yourself person and you want a small and capable gaming system, then the X51 is worth looking in to.