The AMD Radeon HD 6850 graphics card is a worthy successor to the HD 5850. It performed superbly in our benchmarks, with results often matching its technically superior predecessors. Throw 3D gaming into the mix and you have a great graphics card for the $259 asking price.

AMD's Radeon HD 6850 is a mid-range graphics card in the company's freshly-launched 6800 Series. It's also the first model to ditch the ATI moniker, which has been a fixture on AMD graphics cards since the company's acquisition in 2006. While nominally the 'baby' of the 6800 range, AMD's Radeon HD 6850 is a pretty powerful card in its own right; providing a rock-solid performance for the asking price. It is roughly comparable to the Radeon HD 5850 — but in a smaller and more affordable package.

Like the AMD HD 6870, the Radeon HD 6850 is built on a new chip architecture, code-named Barts. This is a modification of the 'Cypress' architecture found in graphics cards such as the Radeon HD 5870 and HD 5890. The main advantage of the Barts architecture is a reduction in size without compromising on performance. 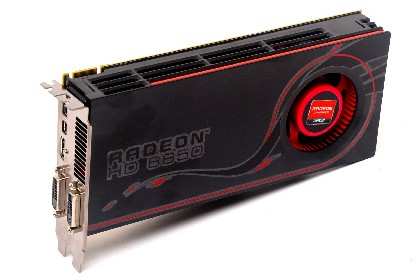 At 230mm long, the AMD Radeon HD 6850 isn't exactly tiny, but it is slightly smaller than equivalent cards from the previous generation. The card looks similar to its 5800 predecessors, with the same brick-like shape and red-on-black finish. The AMD Radeon HD 6850 only requires a six-pin power connector to run (the ATI Radeon HD 5850 required two six-pin connectors). This will help cut down on cable clutter inside your PC; especially if you're planning on a CrossFire multi-card configuration. AMD rates the HD 6850's peak power consumption at 200 Watts, which seems like a pretty fair estimation.

The HD 6850 is a relatively cool performer compared to previous HD Radeon graphics cards. It peaked at 75 degrees Celsius while under load — which is around 20 degrees cooler than its top-tier predecessors. The AMD Radeon HD 6850 comes with a single cooling fan that doesn't make much of a racket — whether you're gaming or watching YouTube, it shouldn't become an intrusion. Handily, the fan expels excess heat outside of the PC's case, which should cut down on the 'sauna effect' that can plague some cards.

The AMD Radeon HD 6850 provides a good range of connectivity. An HDMI output, two DVI ports and a pair of mini-DisplayPort connectors are provided. Naturally, AMD's Eyefinity Technology is also supported, which allows you to drive up to three displays from a single card. This is especially handy for flight sim and racing fans, as it allows them to set up an authentic 'cockpit' style view for added immersion and authenticity.

One of the card's DVI ports is compatible with HD3D, which is AMD's take on Nvidia's GeForce 3D Vision. This technology offers support for the Open Stereo 3D Initiative. Instead of creating dedicated hardware, HD3D promises support for a wide variety of technologies. This includes active-shutter or polarised glasses, along with emerging hardware, such as glasses-free 3D monitors. HD3D support is pretty limited at the moment, but if you're even remotely intrigued by the concept of 3D gaming, it remains a good feature to have.

We ran our benchmarks on a Vista 64-bit machine running an Intel Core i7 965, 6GB of DDR3 RAM and a Western Digital VelociRaptor (WD3000GLFS) hard drive. We then compared the results to other graphics cards we've reviewed in the same testbed. Unless otherwise stated, we have used the DirectX 10 version of each game, with maximum settings enabled: