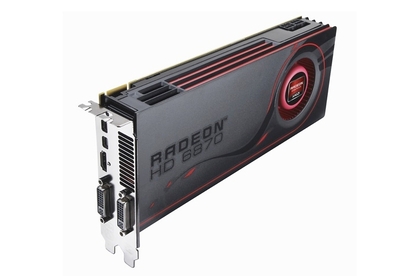 The AMD HD 6870 is a worthy successor to the Radeon HD 5850. It offers a superior gaming performance, comparable power efficiency, and a lower price tag to boot.

If you're already familiar with AMD's 5800 series of graphics cards, you'll be right at home. In addition to sporting a similar aesthetic design, the Radeon HD 6870 comes equipped with AMD's Eyefinity Technology, which will allow you to drive up to three displays from a single card. The card offers a pair of DVI ports (one dual-link and one single-link), an HDMI port, and two mini-DisplayPort connectors. While the variety is admirable, keep in mind that you'll need a pair of mini-DisplayPort adapters.

AMD has also finally implemented their answer to Nvidia's GeForce 3D Vision, with HD3D. Their take on 3D involves support for the Open Stereo 3D Initiative. Instead of creating dedicated hardware, HD3D promises support for a wide variety of methods, ranging from existing active-shutter or polarized glasses, to glasses-free 3D technologies that will eventually work their way to market.

Where performance is concerned, the 6870 makes an impressive showing. We'll start with synthetic benchmarks: they're not necessarily indicative of real-world performance, but as an industry standard they'll give us a generally good impression of where a particular GPU stacks up. The Radeon HD 6870 maintained a consistent lead over the older Radeon HD 5850 in all of our synthetic tests.

While it's admirable to see a card outperform another while saving you about $40, there's no real surprise here: The 6870 sports an improved tessellation engine and a higher clock speed than the 5850, lending the smaller card more muscle in all the right places.

With actual game performance things get a bit closer, but the 6870 still comes out ahead. All tests were performed at resolutions of 1920-by-1200 and 1680-by-1050 with maximum available settings, alternating between disabling and enabling anti-aliasing. The Radeon HD 5850 captures the lead on our Tom Clancy's H.A.W.X. benchmark, but barely: there's an average difference of six frames per second, which simply isn't worth the bump in price.

Where power utilization is concerned, the 6870 gobbles up a bit more energy when under load on our test bench -- 246 watts, versus the 5850's 231 watts. But it's a more conservative part while idle, consuming 103 watts, against the 5850's 127 watts. Keep in mind that those totals take the entire system's load into account -- your own measurements will vary, as our test bench sports a power-hungry Intel Core i7 980X processor and it's accompanying gargantuan heatsink.

To make a bit more sense of these numbers, we'll have to look at the card's relative power efficiency. The results are close: the Radeon HD 5850 edges past the 6870 ever so slightly, but keep in mind that the 6870 keeps the idle power lower by about 30 watts.

To be frank, this one is a no brainer. AMD's Radeon HD 5850 had a good run, but its simply outclassed by a newcomer that offers superior performance, comparable power efficiency, and a lower price tag. A great card may be riding off into the sunset, but the Radeon HD 6870 is every bit the worthy successor.