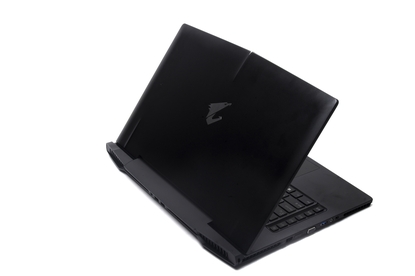 When you need speed, the Aorus X7 v2 can deliver. It has dual GPUs, triple SSDs, a quad-core CPU, and it flies. It's super-slim considering all this good stuff is inside, but it is a wide unit that can be cumbersome to transport. Basically, put this unit on your wishlist if you're a gamer or enthusiast after a portable powerhouse. Just don't expect perfection from its input devices.

The Aorus X7 v2 gaming laptop is very much the same as the previous X7 that we saw back in March, but it now comes with updated guts that make it an even more potent machine, not only for games, but also design, imaging, and video applications. The CPU is a little faster, the graphics adapters are of the latest GeForce generation and set up in SLI mode, and the storage system gets a boost with triple SSDs featured in a RAID 0 array.

A big unit with a slim profile

A slim profile makes the Aorus X7 v2 stand out from many other gaming laptops on the market, and despite having so much power located within its aluminium-clad body, it’s not a bulky product at all, weighing around 3.2kg (though up slightly from the previous model). The laptop is rather flat, and it occupies a large area in order to fit all of its components. It has a 17.3in form factor, but the base extends a bit further back than the screen (the hinges aren't right at the edge), and this is mainly to accommodate some ports and a twin exhaust system.

It can’t be placed into a typical backpack or laptop satchel, so you’ll have to take measurements with you when shopping around for something that can allow you to carry it to LAN parties or anywhere else you need to use it (it's 428mm wide, 305mm deep, and 23mm thick). Make sure you also account for the large power brick, which is 170x80x35mm. Additionally, it will need a fair chunk of space on a desk — more so that many other laptops we've seen — because clearance will need to be given to all of the air vents.

Next to the size, the next thing that stands out is the configuration. It’s a laptop that's built to provide a no-nonsense approach to computing, with a high-end, quad-core, Intel Core i7-4710HQ CPU installed, 16GB of DDR3 1866 SDRAM, and two NVIDIA GeForce GTX 860M graphics adapters set up in SLI mode. Storage is taken care of by a RAID 0 array for the system, which is comprised of three 128GB, Lite-on LMT-1 solid state drives (SSD) for a total formatted capacity of 342GB. Because there is so much room in the wide chassis, Aorus has also been able to bolster the storage capacity by installing a 1TB, 7200rpm hard drive.

Basically, all of this makes the Aorus X7 v2 an intimidating computer that shouldn’t be considered strictly for gaming, but also if you want a high-end laptop for running other intensive software. Unless you need a Quadro or FirePro graphics adapter, the Aorus is a lot more attractive to look at than a workstation laptop, and potentially more fun to work with. That said, it is built for gamers, and includes features such as programmable macro buttons on the left side, and clear markings for the WASD keys, as well as a control panel to take advantage of those capabilities and the performance overall.

To give you an indication of the graphics power to hand, the Aorus got 4670 in 3DMark’s Fire Strike test using default settings (markedly better than the 4176 of the previous model), and this is only bettered so far by a high-end gaming PC. In Battlefield 3, the machine recorded an average frame rate of 69 (peaking at 102fps and dropping to 49fps) while using Ultra detail settings and the native 1920x1080 resolution of the screen. It kept up a steady rate throughout the gameplay.

As for its storage speed, CrystalDiskMark recorded a sequential read of 1476 megabytes per second (MBps), and a sequential write speed of 954.3MBps. It's safe to say that the RAID 0 array in this laptop has provided the fastest results we've seen to date in that benchmark, and the improvement over the previous version of the X7 is vast: up to 481MBps faster when reading, and up to 327MBps faster when writing. But the speed translated well to the everyday usage of the laptop, too. Programs launched almost immediately, while file transfers over USB 3.0 maxed out at the fastest possible rate supported by the external device we used.

What about the other stuff?

That configuration and performance is the main reason you should consider this notebook, and they are the most inspired aspects of it for sure. We think the keyboard and touchpad aren't up to muster considering all the other good stuff to be found in this notebook, and that's something that holds it back from being a clear must-have item. That said, you'll definitely be using a mouse with this thing, and most probably an external keyboard, too, which will negate our complaints.

The keyboard is backlit (this can be controlled by the ambient light sensor) and the keys are full-sized so you can smash them quickly; they bounce back decently. However, they tend to feel flimsy (the Enter key on the far right was a little bent on our test unit), and the keyboard frame as a whole tends to wobble a little during typing sessions, which isn't ideal. There is a number pad thrown in, which introduces congestion around the arrow keys, and this means they can be hard to identify by feel if you should happen to rely on them. Meanwhile, the left side has a column of shortcut keys that can be programmed to run macros. We like the way they line up with each keyboard row, but they are somewhat thin and could use more of a footprint, which would make them easier to hit. Combo key presses are also supported.

As for the touchpad, it has a glassy texture that has its moments: it either feels super-smooth, or it grips like hell if your hand is a little sweaty. It's an ELAN-driven pad that's only decent, not great like it should be for a laptop of this calibre. The tracking wasn't always on point, and occasionally the pointer would move off the mark while tapping.

We like the screen, though. It has a healthy 1920x1080-pixel resolution, and a matte finish makes it easy to view in well-lit environments. Colours look vibrant, and the black level is good for gaming, showing necessary detail in darker scenes. Scenes with fast-moving pace weren't blurred during our tests (response time is 8ms), and we found the viewing angles to be wide; we never had to adjust the tilt of the screen to make it more viewable.

One other thing we should mention before we wrap this up is noise. The Aorus X7 v2 makes plenty of it. Once the fans kick in, you will be able to hear them whining from across the room, and if you're using it while other people are home, then they might even come over to see what's up (until they eventually get used to it). While wearing a headset, you probably won't notice the noise much at all, but if you don't, then there is potential for it to become annoying. You can use the fan control in the pre-installed software to try and tame the fan noise, but it will slow down the system. We left it in the auto setting for our tests, and the system was basically quiet when used for most Web browsing and office-style tasks, only getting getting loud when the CPU or GPUs had to put in hard work.

The fast, multi-fan system is needed to keep the machine cool when it's under a heavy load, because it does produce plenty of heat. In particular, the area just above the keys near the screen gets very hot while gaming, to the point where it can be uncomfortable to touch. The fans push air through two vents on each side, and there are five heat pipes installed to dissipate the heat from the CPU and GPUs.

What else do you need to know about this thing? Well, it has five USB ports (three of them USB 3.0), HDMI, Mini DisplayPort, VGA, Gigabit Ethernet (Killer), an SD card slot, microphone and audio out ports (including S/PDIF), dual-band 802.11ac Wi-Fi (867Mbps), Bluetooth 4.0, and a 1-megapixel webcam.

The battery has a 73.26 Watt-hour rating, but you shouldn't really stray too far from an outlet when using this machine. You can get a couple of hours worth of Web browsing while on battery power (depending on how much online video you watch). The speakers are decent for times when you don't have another option.

It's the speed that really sets the Aorus X7 v2 from other laptops, and this is aided by the quad-core, Core i7 CPU, SLI graphics, and, most impressively, the triple-SSD RAID 0 array. We like this thing not only as a gaming machine, but as a portable powerhouse for other work that needs to be done quickly, be it video or design work. That said, we're not fond of its keyboard and touchpad, though we could probably get used to them in the long run.