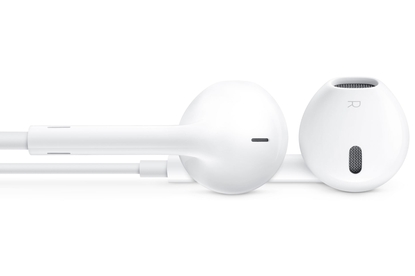 If you don't have a set of EarPods, are they worth spending $35 for? In the world of headphones, $35 is fairly inexpensive, and if you're simply looking to upgrade from existing Apple earbuds, or to replace a lost or broken set, we can recommend the EarPods.

It's become de rigueur to describe Apple's white earbuds as "ubiquitous" and "iconic"--and justifiably so. Not only are they almost inextricably linked to the company's iPods and iPhones, but Apple revealed at its recent press event that it had shipped 600 million sets of the headphones, a number that almost certainly makes them the most-used piece of gear in the history of audio reproduction.

Beyond their ubiquity and iconic status, though, Apple's earbuds have frequently been derided as offering sub-par sound. They've also occasionally been praised--despite their mediocre sound quality compared to higher-end headphones, it's amazing that they sound as good as they do considering that designing good earbuds is inherently difficult, not to mention that Apple produces them at incredible scale and includes them with many products at no additional cost.

Apple has clearly invested significant engineering effort in its earbuds over the years. The product's history includes several minor revisions, including the addition of a rubberized ring to help the earphones stay in place, and an inline remote/microphone module introduced to complement the iPhone. The company has also made two attempts at premium, after-market headphones, including the long-discontinued Apple In-Ear Headphones, and the still-available, dual-driver Apple In-Ear Headphones with Remote and Mic --with mixed results.

All of that is to say that it didn't come as a shock when Apple introduced, alongside the iPhone 5, a completely redesigned version of its classic earbuds, the AU$35 Apple EarPods. (The name is a cute portmanteau of earbuds and iPod, though it's one that's been used before by the earPod headphone case.) Still, though Apple is known for its willingness to introduce both evolutionary updates and complete redesigns of its existing products, it's big news in the audio world when the most pervasive earbuds of all time get replaced with something that's purportedly much better--Apple says the EarPods have been in the works for three years and boasts that the "audio quality is so superior, they rival high-end headphones that cost hundreds of dollars more."

(In addition to the AU$35 retail version, the EarPods are also included with the iPhone 5, fifth generation iPod touch, and seventh generation iPod nano, but not the iPod shuffle, which continues to include the previous Apple earbuds.)

The retail version of the EarPods comes in typically minimalist, white packaging that shows off the product in an included white-and-clear-plastic case, which also acts as a spool for the EarPods' cord. (That cord is slightly thinner than that of the previous earbuds.) The EarPods' inline remote/microphone module, located on the right-hand earpiece cable, is slightly larger than that of the previous earbuds, with additional strain relief, bigger buttons that are easier to press, and no visible microphone hole. The left side of the split cable has a cable slider, which can attach to the right-hand cable to adjust fit or to keep the split cord together during storage. The connections between the cables and the earpieces have also gained enhanced strain relief.

Speaking of the earpieces, that's where the action is. The new earpieces have an oblong, roughly teardrop-shaped silhouette rather than the circular silhouette of the previous earbuds. This shape is the result of Apple's new design process for the EarPods, which was based on taking ear impressions of a large number of individuals and creating an earpiece that would best fit a wide range of ears. The resulting earpieces look a little alien (perhaps appropriate, given the pop-culture association between "pod" and "alien") and feature two grilles: one on the front face and another over the opening that directs sound into the listener's ear. The back side of the earpiece (away from your ear canal), and, cleverly, the stem that leads to the cable both feature bass ports that help tune bass and midrange response.

Sound quality aside, one of the most common complaints about Apple's previous earbuds was that they didn't stay in listeners' ears well. That flaw was annoying for the wearer, but it also meant that the earbuds were often positioned in a way that produced poor sound quality. The new design, at least in my ears, offers a much more secure and comfortable fit. The EarPods didn't fall out due to pesky things like gravity during normal use (although a sharp pull on the cable will dislodge an earpiece). However, the EarPods' fit is still far from perfect, as I discovered when I used them during a workout. Within a minute or two, the right earpiece would work its way out of my ear. Everyone's ears are different, and your mileage may be better or worse than mine, but within about five minutes, I switched back to my trusty Koss KSC--75 for the rest of the workout. Still, I found the fit of the EarPods was worlds better than that of the old Apple earbuds, and I think that will be the case for most listeners.

Because the EarPods fit deeper in the ear than the previous Apple earbuds, they also offer a bit more isolation from outside noise, and they leak less sound. However, they still pale in comparison to true canalphones and canalbuds, which form an acoustic seal in your ear.

The proof of the pudding

Beyond the better fit, Apple says the EarPods's clever new shape is designed to "make a headphone that was the very best it could be." In my initial tests, I was quickly impressed with the EarPods. Bass was always a weak spot of the previous Apple earbuds: It was either nonexistent if you had a poor fit, or overbearing, muddy, and indistinct with a good fit. With the EarPods, bass is much cleaner, with distinct tones, though it still lacks detail--solid performance for an earbud, but not up to the level of, say, an inexpensive canalbud or canalphone. Midrange frequencies sound decent enough and benefit greatly from the better-controlled bass. High frequencies are particularly good, with a clear, natural sound that avoids the harsh, tinny quality of the previous model's treble.

That may sound like faint praise, but getting excellent performance out of earbuds is extremely difficult. For this style of headphones, at this price, Apple's EarPods are impressive, and in my initial testing they appear to be a fantastic upgrade over the previous model. In my experience reviewing headphones, I've found that good headphones enhance the listening experience, while bad ones get in the way of it. The previous Apple earbuds got in the way; the EarPods instead fit right in the center of that range--not enhancing the listening experience, but not detracting from it, either.

Most people who end up with a pair of EarPods will have received them bundled with another Apple product. While some of them will opt for better sound through third-party headphones, many (most?) will happily listen to the EarPods, never realizing they're getting a much-improved listening experience compared to Apple's previous toss-ins.

If you don't have a set of EarPods, are they worth spending $35 for? In the world of headphones, $35 is fairly inexpensive, and if you're simply looking to upgrade from existing Apple earbuds, or to replace a lost or broken set, I can recommend the EarPods--they're easily worth their retail price (which puts them far ahead of the company's previous models). Whether you want to spend a little more for even better sound is another question.