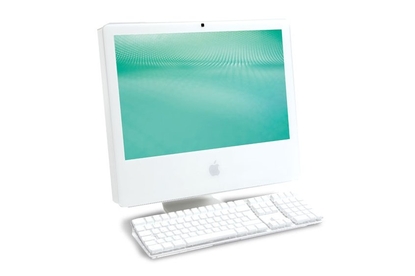 The iMac Core Duo is undoubtedly one for the future, especially considering the impending release of Windows Vista.

The iMac is the first desktop system from Apple that houses the much-vaunted Intel Duo chip - if you can refer to something this intuitive and space-saving as a desktop model. Apple has trumpeted its partnership with Intel, proclaiming massive processing-speed increases. We found the true story slightly more opaque.

The iMac is housed in a stunning 20in screen. With the aid of the 128MB ATI Radeon X1600 graphics chip, colours are deep and bright. Text is sharp, although we found some graining and shallow depth of field in graphics-intensive DVD movies.

There are five USB ports: three USB 2.0 connectors on the iMac's body and two 1.1 ports on the supplied keyboard. There are DVI (digital video interface), VGA, S-Video, two FireWire 400 and composite video inputs. It's a well-connected system, although you'll need to use one USB 1.1 hook-up for the bundled Mighty Mouse. Wireless connectivity is handled by built-in 802.11g Wi-Fi and an integral Bluetooth dongle. And, the iMac runs Apple's OS X Tiger operating system.

We liked the iMac's remote. This little toy gives immediate access to iTunes music, DVD movies, photos and digital film content through iMovie. Combined with its slick design, this gives the iMac the feel of a living-room accessory - a funky media server that, with its 250GB Sata (serial ATA) hard drive and DVI, could replace your TV.

Applications that were designed with the Intel processor in mind are, indeed, rapid. Described by Apple under the mark Universal, such programs make maximum use of the Intel chip's power. The pace potential of this system is awesome and, when software manufacturers have caught delivered Universal applications you'll be able to justify buying it as an office workhorse. (For information on Universal applications please see http://guide.apple.com/universal.

However, programs that haven't been optimised for Intel run in Rosetta, a technology that allows Intel-based Macs to run software designed for Apple's PowerPC processors. In our tests, PowerPC-built apps ran slowly in Rosetta.

This will be a problem for people who use power-sapping design or desktop-publishing packages - in other words, Apple's core audience. And with the upcoming release of Vista, software developers may be too busy trying to keep up with the Gateses to worry about another platform. This doesn't affect any of the excellent Apple media software supplied with the iMac.

Since the first rumours of Apple's switch to Intel chips, everyone has been wondering about the potential speed of Intel-based Macs. Apple's much-publicised test scores for the iMac were made with programs designed specifically for the task. They indicated awesome overall performance potential - but such tests often don't match up to what users see in their everyday lives.

Our real-world tests show that the Intel-based iMac is faster than the iMac G5 when running native apps. However, those improvements are generally far less dramatic than Apple's claims of doubling the speed - we found that the 2GHz Core Duo iMac takes 10 to 25 percent less time than the G5 iMac to perform the same native app tasks. We found that applications that aren't yet Intel-native tend to run about half as quickly as when running on the iMac G5.

Stunning to look at, with a tiny footprint and awesome potential power, the iMac is an excellent system. Those who work with apps such as Adobe CS will be well advised to wait until the software catches up with the hardware.