The iPad may not be as 'magical' as Apple would have you believe, but it remains a very entertaining device and is a nice look into the future of media consumption The iPad isn't magical, as much as Apple wants you to believe this is the case. It is, however, a very entertaining device that’s currently being held back by a lack of content and a number of missing features. The iPad will only get better and will ultimately succeed off the back of Apple's existing application and content ecosystem.

Apple's iPad is finally here. Neither a smartphone nor a laptop, the iPad is Apple's attempt to create a new category of device that sits in between the two. It's expensive, there are plenty of hardware flaws and missing features, and there is a lack of content, but the iPad remains a very entertaining device and it is a nice glimpse into the future of media consumption.

Looking for the best eBook reader? Before you buy an Amazon Kindle, Apple iPad or Sony reader check out our eBook reader comparison guide to find out the best features you should compare.

Aesthetically, the Apple iPad really is an oversized iPod Touch. It features the same, single-button front fascia, and a similar brushed metal rear. The curved design of the back of the iPad makes it comforting to hold, but it’s a little too heavy to operate with one hand. The iPad is relatively thin for a device this size, but is awkward to hold in both portrait or landscape layouts. It's best to prop it up against an object. Apple sells a case that doubles as a stand. 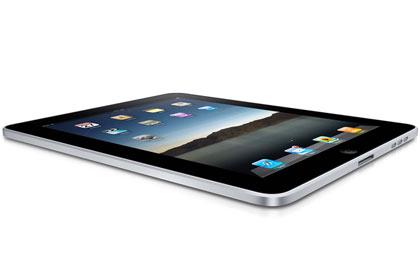 The curved design of the back of the iPad makes it comforting to hold, but it’s a little too heavy to operate with one hand. Thankfully, it is relatively thin for a device this size.

The 9.7in display of the iPad is the real highlight of this device. It's bright, crisp and clear and really brings iPad content to life, particularly photos and videos. Though the iPad has the same oleophobic screen coating as the iPhone 3GS, its larger size means a few taps on the display quickly results in a grubby mess that’s hard to clean. The iPad also has another serious flaw — its display is virtually impossible to see in direct sunlight, which is a huge issue on a device that’s designed for portability and travel.

To use the iPad you'll need to synchronise it with a PC or Mac using iTunes. It works identically to the iPhone and the iPod Touch in this regard. The iPad lacks a USB port and a memory card reader, so the only way to transfer content such as photos and videos to the device is through iTunes. Apple will sell a SD card dongle attachment that allows you to upload photos straight to the iPad, but this isn't available yet and you will need to purchase it separately. We think the lack of SD card reader is a critical oversight on a device that's perfect for viewing and storing photos, and there's also no built-in camera. Once you've transferred photos to the iPad, they look superb on the display. A nice touch is the photo frame mode — accessed by tapping the small icon on the lock screen — that immediately turns the iPad into a digital photo frame. 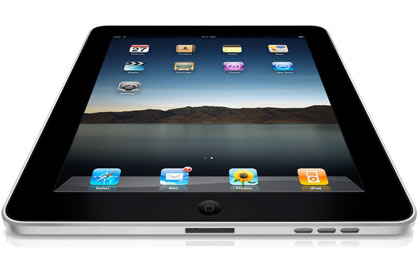 The iPad lacks a USB port, so the only way to transfer content such as photos and videos to the device is through iTunes. It uses the standard Apple dock connector to do this.

Once you've set up and synchronised your iPad, you'll have access to the App Store. The iPad will run almost all of the 150,000+ iPhone apps without any problems, but due to the larger display, they look small (the same size as the iPhone screen). A magnification icon enlarges iPhone apps to fill the iPad's screen, but this makes the apps blurry. The iPad is extremely fast, and loads applications almost instantly.

Thankfully, there are also a number of apps specifically designed for use on the iPad, and the number available will continue to grow. The picks of the bunch include Real Racing HD and Flight Control HD, both iPhone games that have been redesigned for the iPad, the Twitteriffic Twitter client, Scrabble, eBay, Yahoo! Entertainment and The New York Times. Generally, iPad apps are much more expensive than iPhone ones (starting at around US$5 or US$10), though there are a few free apps available. The appeal of the iPad will grow as more content is readily available, such as magazines and newspapers. 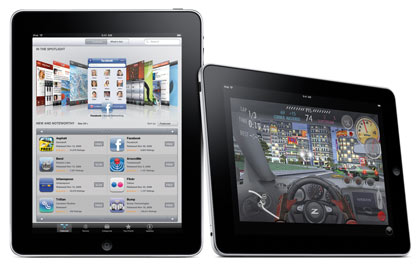 The iPad's large screen opens up a whole new world of apps, particularly games. The iPad will run most standard iPhone apps already in the App Store, but apps specifically designed for the iPad will continue to grow.

Though the iPad is a content consumption device rather than a content creation device, Apple has still seen fit to offer iPad versions of its iWork productivity applications — pages, numbers and keynote. While we can see benefits of the keynote application for business presentations, the iPad's on-screen keyboard just isn't suited to creating text or spreadsheet documents. There is no haptic feedback, and the large design means the iPad is hard to hold comfortably for any serious typing. You can purchase Apple's keyboard and dock accessory, which also stands the iPad up in a comfortable position, but this eliminates the iPad's portability factor. And in reality, we think you would be buying an iPad precisely because you don't need these bits of software.

The iPad is also an e-book reader and Apple's iBooks app is specifically designed to store and download books. Strangely, iBooks isn't preloaded onto the iPad, but it's available in the App Store as a free download. Your downloaded books are stored on a virtual bookshelf, while the iBookstore (accessible through the iBooks app itself) allows you to purchase books, with most titles currently costing between US$9.99 and US$12.99. The bright, backlit screen isn't ideal for reading books as your eyes get sore after extended periods. As with other media content such as magazines and newspapers, the iPad's appeal will grow as more book publishers make their titles available on the platform. 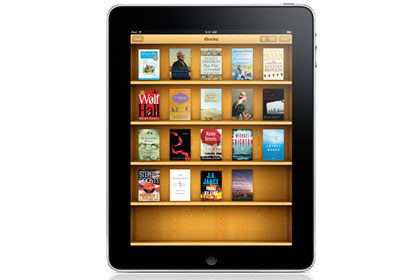 The iPad is also an e-book reader and Apple's iBooks app is specifically designed to store and download books. iBooks isn't preloaded onto the iPad, but it's available in the App Store as a free download.

Web browsing on the iPad is an excellent experience, though the lack of Flash supports dampens the occasion somewhat. The Safari browser loads Web pages quickly and renders them almost perfectly. Multitouch technology (the same used on the iPhone and iPod touch) means you can pinch to zoom. The other default applications — including mail, calendar, notes, maps, videos, YouTube and settings — work in a similar manner to their iPhone equivalents, but have redesigned interfaces to suit the iPad's larger screen. The iPad currently lacks multitasking, but this may come in the near future with a software update. A strange omission on the iPad is a clock application, meaning there is no alarm available.

Perhaps the most impressive aspect of the iPad is its battery life — Apple claims a 10 hour figure, but we were able to achieve almost 11 hours in many instances, depending on the applications we used.

All in all, it's important to understand that the iPad is not a netbook or notebook replacement. If you already own an iPhone, it's also not going to wow you as it would a non-iPhone owner. However, the iPad certainly shouldn't be criticised for these two points — it simply hasn't been designed to replace a notebook. This is a media consumption device that’s currently a little limited due to the lack of readily available content, such as newspapers, magazines and books. Sure, there are plenty of decent books in the iBook store, but until the range can rival your local Angus and Robertson bookshop, the iPad remains more of a luxury, wow-factor item than an essential purchase. However, you can bank on the iPad and the iPad platform getting better.