Apple brings a raft of new features to the iPhone 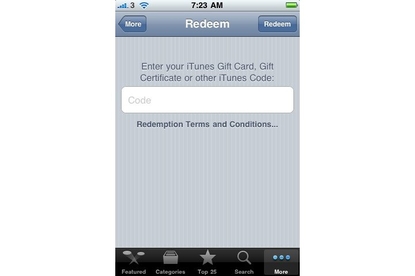 The latest update to the iPhone's operating system provides many of the changes users have asked for since the smartphone's launch. There are still some missing, but those features that have been added are implemented well.

Apple has released the biggest update yet for the iPhone 3G: the 250MB OS 3.0 Software Update. The new update improves the iPhone experience for both business users and others.

It has been two years coming, but copy and paste has finally arrived on the iPhone. It has been implemented well, too: you can copy, cut and paste both text and pictures between first-party and third-party apps. Simply hold down on a single word, tap Select or Select All and alter the highlighted area to fit your desired text. Being able to copy and paste pictures means you can now e-mail multiple photos using the standard Mail app, but we find this solution a little unwieldy compared to third-party apps like Multi-Photo Email.

The other major feature in the iPhone OS 3.0 Software Update is MMS messaging. Previously only available on jailbroken iPhones, Apple has integrated the functionality directly into the Messages app (previously the SMS app). Tapping the camera icon next to the message text box brings up the Photo Library, from which you can send pictures and, if you have an iPhone 3G S, video as well. Audio clips can also been sent via MMS from the Voice Memos app, and contacts can be shared from the Phone app. MMS contacts are designed specifically for the iPhone and will only work with handsets running Software Update 3.0 or later.

Named after its Mac OS X counterpart, Spotlight is the iPhone's new universal search function. It allows you to search through contacts, messages, mail, applications and your iPod library. Simply flick to the left of the Home Screen to reach Spotlight, type in your desired keyword and it will dynamically show results sorted by category. Unlike its Mac OS X namesake, iPhone's Spotlight won't search through the actual content of e-mails or SMS messages, but it does search recipients and subject lines. You can also place restrictions on which content Spotlight searches using the Settings menu.

Voice Memos is the only new first-party app in the software update. The ability to record sound clips and share them via e-mail or MMS replicates the functionality of numerous third-party apps. There isn't too much to this app but the interface is attractive and simple to use.

A landscape keyboard mode, previously the realm of MobileSafari and third-party Mail apps, has been introduced to all of the iPhone's first-party apps that use a keyboard. You will no longer need another icon on your Home Screen to type your SMS messages and e-mails in landscape mode. We have found ourselves using this constantly, as the landscape keyboard is much more comfortable way to type, even if it does take up more screen real estate.

The update has improved performance, making everything from starting an app to typing on the keyboard feel more responsive. App compatibility is quite good, too; given the warning Apple provided to third-party developers, this isn't surprising.

There is still room for improvement on the iPhone: Bluetooth file transfers and the ability to run applications in the background would definitely be appreciated, as would the ability to mark multiple e-mails as read in the Mail app. We were unable to properly test push notifications — Apple's solution for background applications — as third-party developers are yet to update their apps with this functionality. Nevertheless, the iPhone OS 3.0 Software Update will certainly breathe new life into your iPhone or iPhone 3G, reducing the need to fork out for the iPhone 3G S.

Check out even more screenshots of the iPhone OS 3.0 Software Update.

What do you think of the iPhone 3.0 Software Update? Tell us on the PC World Forums.

For more information on all things iPhone, visit our iPhone Centre.