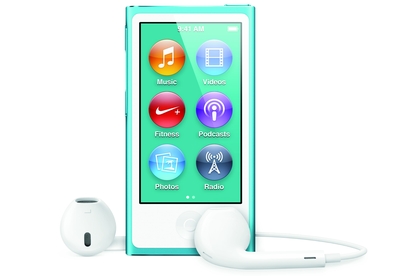 Apple's refresh of the iPod nano brings a larger, longer screen, a revamped iOS-esque interface, and some integrated features that should cement the nano's position as the media player of choice for fitness junkies, gadget lovers and budget-minded buyers.

It's not as popular as the iPhone 5, and it's not as exciting as the iPod touch, but the new Apple iPod nano deserves its time in the sun: it's the thinnest iPod ever, and has the largest display ever used in this particular pint-sized media player.

The new iPod nano's screen is 2.5 inches in size in a 16:9 widescreen aspect ratio. It's multi-touch, which should mean touchscreen commands like swiping and pinching work properly.

It's got a redesigned operating system that isn't quite iOS 6. Like the last nano, it runs a cut-down version that looks familiar, but doesn't have the same functionality as the full-fat version you see on the iPod touch and iPhone. It's changed to a rounded icon layout, and the etching on the home button changes from a round-cornered-square to a circle too.

It's in built-in convenience features that the iPod nano makes its biggest steps forward. It's got integrated Bluetooth for syncing the appropriate wireless headphones, or portable speaker systems and car stereos. The integrated pedometer and Nike+ support means it's a good tool for keeping track of your daily fitness — although you won't be able to wear it like a watch like the old model.

It's got the longest battery life of any nano, despite the big screen and extra features. 30 hours of life is Apple's quoted figure for music playback. The new iPod nano comes in seven colours — cyan, green, yellow, pink, purple, white, and black.