The new Mac Mini from Apple retains its small form factor but gets an updated CPU and beefier graphics. 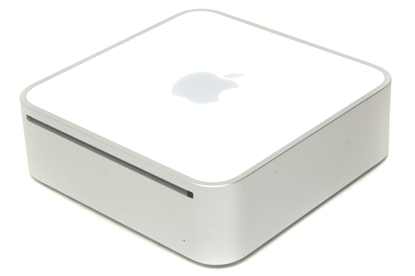 With the latest upgrade, the price gap between the Mac Mini and other Apple computers has widened. For the price, you get decent power and a small case that will fit into the tightest of spaces.

It has been a year and a half since Apple updated its budget desktop line of Macs, but a new Mac Mini has finally been released. That may excite those looking for a cheap computer or powerful alternative to the AppleTV. The hardware has been improved, but the design is similar to the previous model. The lack of an HDMI connection remains the biggest deterrent to those looking for an elegant home theatre PC.

Wireless connectivity includes 802.11a/b/g and draft-n over 2.4GHz and 5GHz radio frequencies, as well as integrated Bluetooth 2.1 with EDR.

Testing the 2.0GHz Mac Mini with 2GB of DDR3 RAM, we encoded an album’s worth of uncompressed WAV audio files to 192Kbps MP3 audio in 1min 33sec; this is the same result as the similarly configured (but Windows-based) Dell Studio Hybrid. The Mac Mini is capable of accomplishing most office productivity, Web browsing and basic creative tasks; however, it did struggle to complete iTunes' gapless playback process on a large music library without freezing.

The Mac Mini lacks a keyboard and mouse but it is comparatively well-priced for an Apple computer. Optional upgrades aren’t expensive either, at $270 for a 2.26GHz Intel Core 2 Duo CPU and $180 for an extra 2GB of DDR3 RAM (for a total of 4GB of memory).

The Mac Mini's exterior design has gone unchanged. It still has the brushed aluminium sides, the white top with familiar logo, and a tiny white LED power indicator on the front. The back panel features a power connector, Gigabit Ethernet and five USB ports (up from four on the previous model). FireWire 400 has vanished; it's replaced by a FireWire 800 port (you can attach FireWire 400 devices if you purchase an adapter).

Both of its display ports use proprietary Apple connections: mini-DVI and mini-DisplayPort. Unless you have the Apple LED Cinema Display, using either port will require an adapter; a mini-DVI to DVI adapter is bundled, but otherwise you are looking at shelling out more cash. The Mac Mini also lacks an HDMI connection, and there is currently no way to throughput audio and video over the same connection from the Mac Mini to conventional home theatre components.

The Mac Mini's closest competitor in size is the Dell Studio Hybrid, and with its beefier graphics the Apple comes out on top.

The Mac Mini remains cool and quiet during use, dissipating heat through recessed vents on the underside and a vent on the back.

The computer's small stature can be attributed in part to the use of an external power supply. Rated at 110W, the brick is significantly larger than a power adapter of the Apple Macbook Pro but is still small enough to tuck away behind a desk. According to Apple, it also makes the Mac Mini the world’s most energy-efficient desktop computer. Though it is hard to substantiate this claim, the Mac Mini definitely didn't consume much power during our tests, drawing 12W in standby mode and reaching brief peaks of 49W during intensive tasks.

MacOS X 10.5.6 is preinstalled, as is Apple’s creative suite, iLife 09, with access to software including GarageBand, iPhoto and iMovie. iWork 09, however, isn’t included, leaving the Mac Mini devoid of any competent productivity applications.

Apple's cheapest desktop computer works well as both a low-end, small-form-factor PC. It provides reasonable power in a small and competitively priced package. Unfortunately, the lack of an HDMI connection makes the Mac Mini unsuitable for your home theatre system.