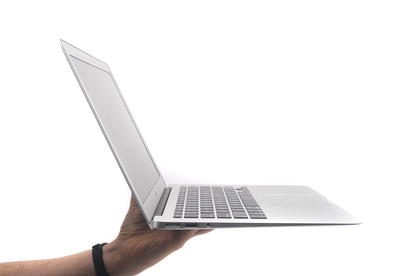 Seven years have gone by and the design of the MacBook Air remains largely unchanged. That’s an eternity for an electronic, and although its once cutting-edge looks are beginning to age, the feat warrants respect.

The design of the MacBook remains relevant because it is as ordinary as a white sheet of paper. There is no flash to the cut of its keyboard, no flamboyant lines or experimental shapes marking its body.

Charm is sourced from the use of premium materials. Most of its body is forged from a single block of aluminium. No doubt the insides of the computer are protected by the metallic exterior — the base scarcely flexes under exerted pressure.

It’s the width of the notebook that reveals the MacBook’s age. Thick bezels were a fixture of all notebooks seven years ago. The updated flagships from rivals now have sleek and slender frames, such as the Dell XPS 13, Acer Aspire S7 and Lenovo X1 Carbon.

The MacBook Air being reviewed is the 13.3-inch model. Like the design, the display has its strengths and its weaknesses. Colours are vibrant and brightness is commendable. Tilting the screen forward reveals weak horizontal viewing angles and the 1440x900 resolution lingers behind the competition.

Redeeming the MacBook Air is a keyboard and a trackpad that remains at the forefront of the industry. Keys are large, contoured and provide plenty of travel for a notebook so thin. It is as easy working on the Air when out-and-about as it is sitting behind a desk for hours on end.

Earlier this year we reviewed the MacBook, which now sets Apple’s standard in mobile computing. The shallow depth of travel characterising the MacBook’s keyboard deemed it suitable for people who would spend more time travelling and less time working. The Air differs by achieving a fine balance between the two.

Most notebook companies treat the trackpad only as a means to control a cursor. Apple goes one further as its capacitive trackpad is fluent in the language of touch gestures found in iPhones and iPads. The accuracy of the MacBook Air’s trackpad deems the need for a touchscreen redundant.

The small notebook maintains a strong repertoire of connectivity technologies. It supports dual-band Wi-Fi 802.11ac, has Bluetooth 4.0 and an SDXC card slot. There’s a Thunderbolt 2.0 port for rapid data transfers and support for high resolution 4K displays, while each side has its own USB 3.0 port for use with external storage drives and other devices.

People torn between the Air and the new MacBook should consider the different ways each one approaches connectivity. The smaller MacBook has two ports only — a 3.5mm audio input and a USB-C port — and this means an adaptor will be needed for it to work with a USB drive or an external display.

Powering the MacBook Air is a fifth generation Intel core i5 processor that is clocked at 1.6GHz and can be turbo boosted to 2.7GHz. Stock models ship with 4GB of DDR3 RAM and 128GB of PCIe-based flash storage. This is the model being reviewed by Good Gear Guide and it retails for $1,399.

Retail stores offer a model with a larger 256GB PCIe-based storage drive and it retails for $1699.

Configuring the MacBook Air is possible if it is ordered from Apple’s online store. Equipping it with a core i7 processor clocked at 2.2GHz (turbo boosted to 3.2GHz), 8GB of DDR3 RAM and a 512GB PCIe-based flash storage drive will be priced at $2479.

The core i5 processor in our review model performed well over two months of testing. It proves ideal for everyday office tasks, such as drafting Word documents and sending emails, and is adept at handling multimedia, the likes of importing photos, or movie and music playback.

Strong results in a Blender 3D test indicates the core i5 CPU in the MacBook Air outperforms its similarly specced rivals. It rendered an image in 35 seconds, which is quicker than the 40 second result of a core i7 Dell XPS 13 and the 46 seconds result of a Lenovo ThinkPad X1 Carbon.

The PCIe-based flash storage used in the MacBook Air maxed out Blackmagic’s Disk Speed Test with a 623MB/s write speed and a 1401MB/s read speed.

Sealed behind torx screws is a 54-watt-hour lithium-polymer battery. Testing the battery life involved looping the playback of a Full HD movie, with brightness set to max, Bluetooth switched on and Wi-Fi enabled.

The results impressed. PCWorld found the MacBook Air would run for 9 hours and 20 minutes before the battery needed recharging.

The Apple MacBook Air is a rare case where time has worked in a notebook’s favour. Each rendition has seen its technology mature, and even its sore points are somehow redeemed, like how the low resolution of its screen is offset by excellent battery life.

Standards today deem the Air not the thinnest, nor lightest notebook on the market. But if you want a notebook that can go distance of a nine hour work day, whether that's on the road or behind a desk, then Apple's MacBook Air fits the bill just fine.